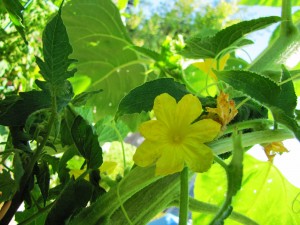 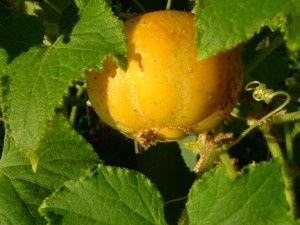 O dear, what is this?, I inquire as I am watering the hale-bay mini-farm in the “Back Forty” (feet) one afternoon.  A self-seeded lemon cucumber had invaded the King Zucchini garden square and was merrily vining its’ way through the orange marigolds surrounding the King himself and plopping herself over the tops of baby carrots hiding under gargantuan zuke leaves and was carefreely dotting the entire square with delicate yellow flowers and spontaneity.

I hadn’t planned for you here this year, I try to explain with the greatest tact.  I mean, I haven’t prepared a space for you, hoping she will undersatnd and take the hint.

Oh no worries, the lemon cuke enthuses.  I’ll just make myself at home.

I see the glare of my extra large, super-fruiting zucchini plant.  He has, after all, been faithfully supplying me with enough dark green squash for 4 or 5 families this summer.  I avert my eyes. 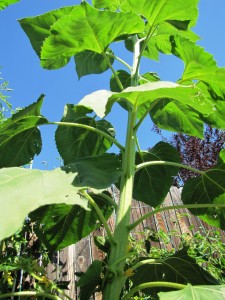 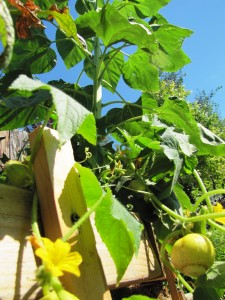 Up the hill and over the hay bale farm fence.  Tsk.

In the hay-bale farm, just up the hill, a large, thick-stemmed sunflower has also roosted without my prior consent.  I saw him arrive a few weeks back, invading the tomato grove, and assumed he was just passing through.  I neither encouraged or discouraged his visit, thinking that my lack of hospitality via watering would send him scurrying.  But no.  The next thing you knew, his stocky roots were deliberately implanted, invading the straw bales with great ferocity, and boom!  This sunflower is a squatter.  I have continued to ignore him…until today.

For baby-girl Lemon Cuke has jumped the bounds of the garden square and is now winding her tendrils, in utter adoration, around this stately, dare-devil-of-a sunflower.  Apparant partners in crime, the two interlopers have formed an undeniable attachment.  A common cause, I guess.  Lemon cuke has found a place to go.  That sunflower is a forward fellow, I note.  Quite the bold one, enticing the flowery cucumber like that.

I hope you know what you have gotten yourself into here, scowls King Zucchini.

Yes, I smile with resign as I pick lots of little round, fat, bright yellow, baby cucumbers.  Yes, I do.  Lots of cold cucumber sandwiches in my future.