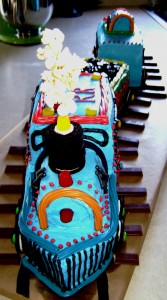 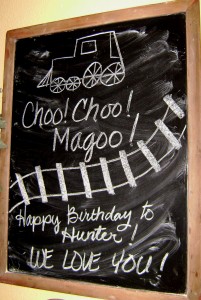 Whereas last year’s firetruck cake (see here) was about 80 pounds and I toiled in fear over it, I have now realized I am not really “into” novelty cakes and was very relaxed.  It was simple and straightforward (with Dave explaining to me what a train must have) and instead of doing lots of piping and icing stuff, we “glued” Tropical Twizzlers and M & Ms and Dots, along with a couple of varieties of cookies onto this train cake for Hunter’s 4th birthday.  Dave piped windows for me and I came up with mini-Kit Kats as the idea for the railroad ties.

The board it was on was 13 inches wide by 3 feet long.  The engine was 3 2-inch layers of cake at it’s highest part and was 4″ wide by 14″ long. The other cars were 8 inches and 12 inches long, respectively.  The “coal” was a box of Junior Mints.  It was just plain white cake wih the almond-infused buttercream, which, it turns out, Hunter is not a fan of.  He wants his icing (which he prefers to cake) to be plain, old vanilla-flavored.  Next time, Magoo, next time.

The smokestack was my favorite part: icing glued cookies, and a “Dot” base holding a cocktail pick threaded through popcorn for the smoke.  Pretty cute! 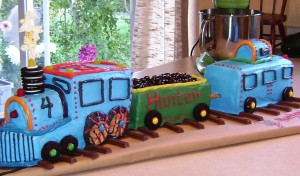 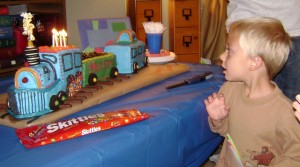 I had looked at a bunch of train cakes online and cracked up at them and wondered why people would even post them.  Then mine turned out like theirs.  Ha!  But there wasn’t any sweat and the grandkids loved it. It was quick, simple, easy, fun and in the end the candy was the huge hit!

There are still vats of buttercream here…takers?…Jeanie

pictured: the cake, the chalkboard in the kitchen;  and Hunter at his house about to blow out his candles!