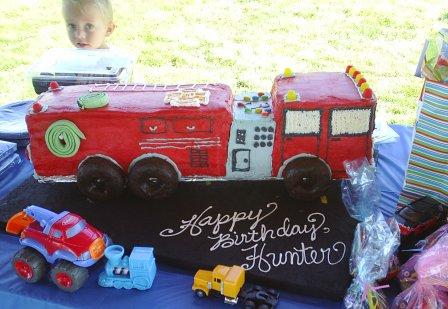 Tara called one night while I was watching Ace of Cakes (www.charmcitycakes.com)  to tell me to be thinking about Hunter's birthday cake.  They were planning a "wheels" theme so all the little tykes could bring their Big Wheels or trikes, or skateboards or bicycles to this little area at their local park and "wheel around."  The party would culminate in a visit to the local fire house situated near the park where the firemen had told her the kids could climb around on a fire truck – great photo opp!

Duff and the Charm City Cakes team in Boston were doing a fire engine that night for a local benefit.  It seemed a "God-moment."  Inspiration filled the room with the sound of angels.  I would create for Hunter Magoo a fire truck cake.

By the end of the show I was freaked out.  The one they had done was so detailed, took so many hours and people that I was afraid to try.  But Stormie said we could, so we did.  Thank goodness my husband helped!

It was nothing like Duff's, and in fact, if you looked at it head-on from the front, it looked like it was squealing into an emergency scene in a cartoonish way.  Here is what Stormie and I came up with: 4 Duncan Hines Chocolate Butter Cake mixes (made with real butter) to which I added pudding, a simple syrup moistening, and filled with creamy chocolate fudge.  The finished size was 6"w x 23 1/2"l x maybe 7 1/2" high.

We used about 10 pounds of almond-infused buttercream and 3 containers of red food color (2 gel by Wilton, 1 squeezee bottle because I feared it wasn't red enough).  We made hoses out of the moldable pastillage (which dries harder than the Rocky Mountains).  The tires were Entemann's chocolate cake donuts.  The "lights" were M & Ms, and Dots.

I made a royal icing 3-D laddar, but it was too delicate and kept breaking.  So we just piped on the rest of the decorations.  It was heavier than a heart attack.  We placed the actual cake on raised, foil-covered masonite, cut to size.  We displayed the whole on a scrap of particle board that we painted black to resemble a black-top parking lot, and then I painted yellow "parking lines" on it.  This "inspiration" happened literally less than an hour before leaving the house.  If I'd had it sooner, I'd have made pastillage "cement" parking barriers and some green scaping with icing and tinted sugar.  There also would have been a molded fire hydrant and a Dalmation or two. 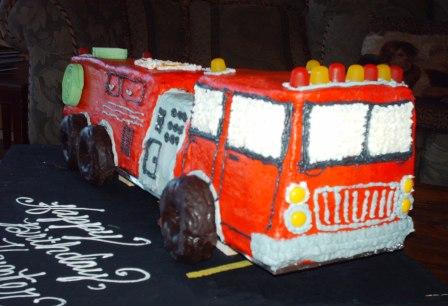 Hunter got the chocolate fire truck cake he wanted and I think he liked it because his mom told me that yesterday after his nap, she walked in to find him naked on the kitchen table, quietly and contentedly eating leftover cake like, "This is the life."

NOTE:  Hunter is peering over the table on the top photo.