There are a whole slew of books that have been compiled by Alice Gray in the Lists to Live By series and I adore them.  Just open them up and flip randomly through and you will find a list you needed – right that very second.  They come from other books and essays, magazine articles and sources and are compiled, apparently, by some one who recognizes the value of a list as much as I do. 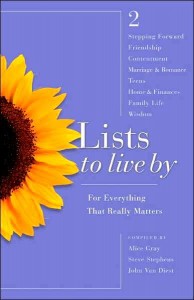 Dave (who drew it freehand – yes, he is talented) helped Stephanie paint a giant cardboard “Great Pumpkin” display for Guini’s classroom at school, then got some cute front yard shots under their autumn-blazing tree.  Gavin left, all three kids next; Gunivere and Gemma May  (to see larger images, click on thumbnails and then click on photo again – oddly complicated, I know)