The pictures we didn’t use, Part 1 In early November (we were so far ahead this year…until recently…what happened???) we took the kids to a nearby farm where the Wrex-ter had secured the use of a few animals for the shoot.  An icy wind blowing in that morning could not stop this fun piece o’ Rhoades-family fun.  We have come a long way since the first one I did a few years back with a tablecloth tacked to the kitchen wall as a backdrop! Two miniature donkeys were the picture of patience and endurance.  Hunter liked making the feathers on Gemma’s wings flutter. 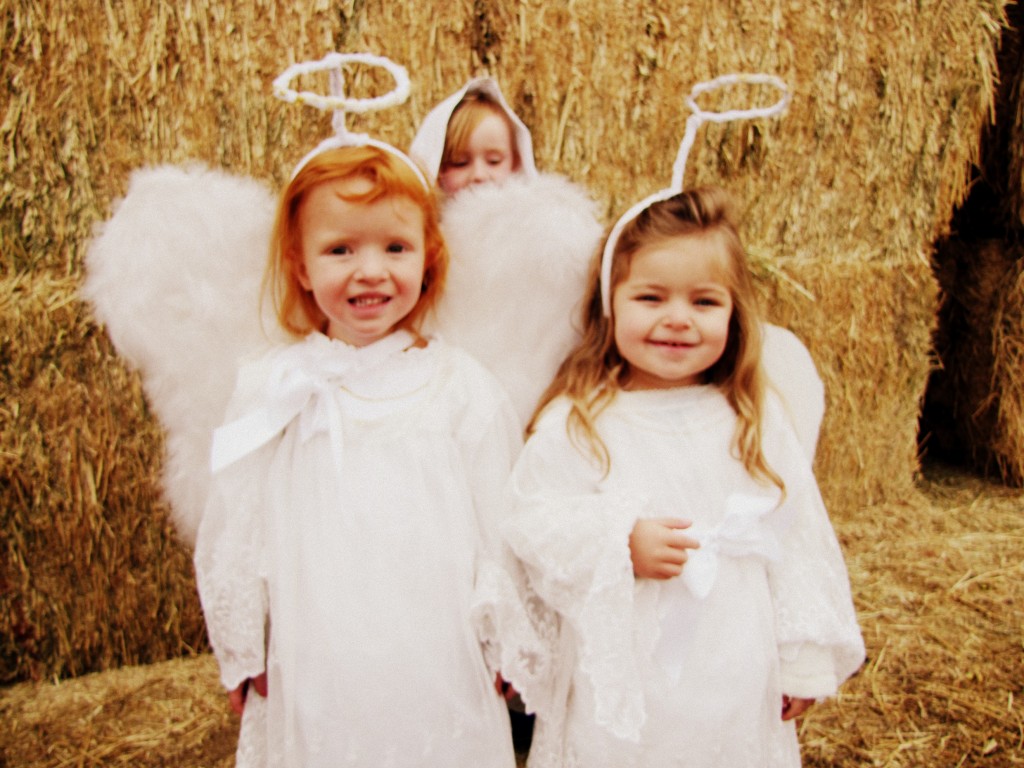 Hark, the Hearld Angels Sing!  Gemma May and Averi-J are experienced angels by now!  The alpaca severely questioned the right of all the other animals to be there.  Baby calf just wanted to eat some hay.  Pictured on the right – a farm guy I don’t know, Wrex’s dad, Bill Phipps, from Nebraska, and Wrex himself! Behind the scenes, “Baby Jesus” had not yet been placed.  The angels again – wearing hot-glue-gunned white sheaths underneath vintage altar boy robe toppers.  Pretty! The photo on the left was snapped as Wrex was bringing the calf to the right of the set and the mini-donkeys went a little ballistic.  They bolted, knocked over the pottery and almost trampled Baby Amelie Belle, meanwhile Gemma was hiding behind Averi because the alpaca was kind of aggressive and the goat was head-butting the bale of straw.  It was all falling apart at this precise moment!  “Baby Jesus” was waling!  Good times! Baby Jesus was “loaned” to us: Sawyer Joel Phipps, whose “other grandparents” live in Nebraska and Texas.  Sawyer was not that fond of the manger set up.  No she was not.  I don’t think she really liked her sparkly glory-halo headband, either.  Huh-uh.  No.  I don’t think she did.  And she may have been freezing to death.  Sure, she was barely over 2 months old, but I don’t think it is too early for her to know that though it may be pretty darn uncomfortable, the Christmas card photoshoot is the most important thing!  Hahaha!  I hope you know I am kidding, people! We had to coax the angels out of hiding and try to regain control of the photoshoot.  Guini as Mary was ever the professional, remaining in character throughout the shoot. Hard to believe, but true: the whole shoot was less than 10 minutes.

Tredessa shot the pictures, Stormie created the Christmas card for us.  The animals made it an adventure.  Their parents blessed us with the grandbebes. The grandkids provided the laughs.  God gave us a Savior!