Growing up in the 60's and 70's, Christmas trees were much different than they are now.  These days everyone has their very own designer-collection-themed-one-of-a-kind-specially-lit-custom-skirted tree…or two.  But in the 60's and 70's there were only a couple of ways to go: a real tree, which was like 88.920173% of the population, or a you-can-really-tell-it's-a-fake tree.  Ornaments were simpler – mostly shiny, round balls with a few special pieces here and there.  Garland?  Silver or gold, run in either a straight, but descending line or fancily looped.

We had the big C7 lights on our trees in the 60's that morphed into the tiny twinkle lights of the 70s, but since they were so small and we weren't used to that then, they had these multi-prismed, plastic cuffs that fit onto them to reflect more light. 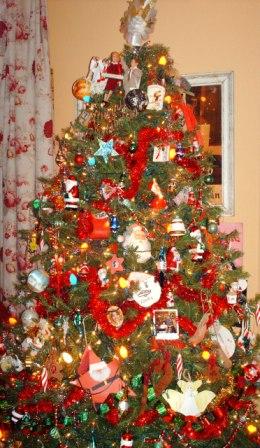 But the one thing that was so prevalent back then – on nearly every single tree in some quanitity, something that you don't see much, for it has been out of vogue for so long now – was tinsel.  Placing tinsel on the tree was the final, crowning glory – that last touch that suddenly made all the pieces a congruent work of art.  My neighbor's family blanketed theirs with so much tinsel that you could barely make out the colored lights or decorations.  There were friends who would place one strand of tinsel per branch-creating a tree that spoke of scarcity to me – did those people give out presents with the same reservation?

But my mom was the perfect tinsl-er.  She could stand back and look and know exactly the amount of tinsel that was needed and where and would lovingly distribute it about.  And suddenly, we would all step back and look and the tree had all of the tiny streamers of glittering silver tinsel it needed.  It did not need even one more strand.  It did not need less.  It was perfect.

But  tinsel became so passe.  In the late 80's I moved to designer colored tinsel for my trees, which was long, and sleek and came in purple or mauve or country blue, perhaps white.  But by the 90's, really, people, it was so out!  There was no way I would use that stuff!

But then, I got nostalgic.

So – we have THE tree in the living room.  It is well-coordinated and I do believe: lovely, and tells, through the materials I have carefully chosen, my faith story, my celebration of Christ, my decorative taste for Christmas.

But the tree in the family room, full of odds and ends from so many Christmases past, packed with school-made ornaments and artwork from my 5 children, laced with a paperchain and candy canes and C7s burning alongside tiny twinkle-lights in white, yes, but colors, too! – That tree is my Christmas past (lots of "Baby's first Christmas" found here!) and my Christmas present (now I have grandchildren adding to the ornamentation) and it is what I cherish most as I look ahead.  It is heavily-laden.  Stormie asked, "Where are the branches?"

It's true, as I finished I noticed that all of the stuff was was obscuring some of the light.  But I knew just what to do.  I grabbed a handful of wadded, fine, silver tinsel and began placing little tufts of it here and there.  I actually got teary-eyed at the memory of it, but also at the revelation I received, for everywhere I tucked some in, that branch, that little area, suddenly became sparkly and well-lit, as the tinsel reflected the lights on the tree. 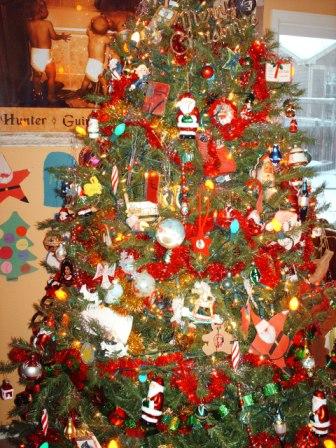 "And we, who with unveiled faces all reflect God's glory, are being transformed into His likeness with ever-increasing glory, which comes from the Lord…" 2 Cor. 3.18 NIV

I am Christmas tinsel.  Some may welcome what I bring, others eschew it, but wherever I go, no matter how much darkness was there, I am a reflector and that darkness is a little less powerful.

No kidding-that is really what I got as I hung tinsel!…Jeanie

NOTE TO SELF: I am not ashamed of the gospel of Jesus Christ.  I am happy to reflect HIS glory in the heavily-shadowed places I encounter each day.  Unveil, soak up the glory.

Pictured: the family room tree, topped with my own childhood angel-hair angel from 1964

7 thoughts on “Reflecting the Glory”