A mild and lovely 4th ~ which got a thorough summer soaking complete with rolling thunder around 9 o’clock in the evening, thereby ruining patriotic fireworks displays around the metro-area (the show may go on, check your local news agencies for possible events tonight), has become a bright, sunny, wet backyard morning.  The orange-bellied American robin prances around the yard and gardens with great satisfaction, having her fill of an insect-breakfast and refreshing sips from raindrop-covered leaves.

“I’d really rather just enjoy the morning,” she gently resists me.  Dropping her eyes and brushing her apron demurely she explains, “I was not prepared to be photographed this morning.” 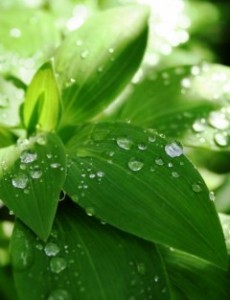 Nonetheless ~ The leaves dance.  The flowers stand fully gratified with the evening’s gift.  The tomatoes swell.  All sparkles.  Everything is clean.  Pretty morning.  Quite nice.

We arrived in Puerto Rico late on a Monday night to the most intoxicating chirping and tropical song.  Luke and I both thought they were surely piping in the sound of large birds,  for the trees around the entire resort were alive with sound – loud sound.

Luke and I were wrong.  The sound, we were told, were the male tree frogs calling out, wooing the females, from sun-down to sun-up.  The Coqui (which means “little frog”) got its’ name from the sound it makes: ko-kee’, a sort-of whistle or chirp.  There must have been thousands of them there.  They lullaby’ed me all night long.

I miss their song already.