At only 11 weeks, Tuppy (Steph and the kids’ Christmas surprise from Tristan), has become a spokes-model for PetSmart and Martha Stewart products.  I am not sure if you will see anything cuter than this today.  Or for the rest of the week, for that matter.  Ay-yi-yi. CUTE!

And my daughter is pretty ravishing, herself.  Gorgeous and successful in everything she does.

Plus-see a sneak peek from a Christian film in production right now.  Know anybody??

O wait. What is this?? Another one of my nerdy fly-over movies? Ok, yes. What about it??

Shhhhhh…..don’t tell Gemma May, nor Averi Jadyn what you saw here… 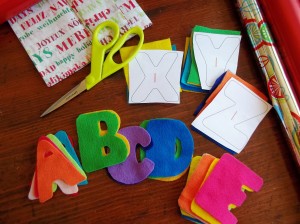 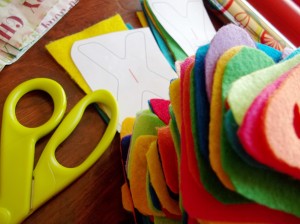 Found this ABC Pillow way back when it would have been an appropriate activity for Hunter and Guinivere, and though I didn’t get around to it then, I am making these for Gemma and Averi for Christmas. 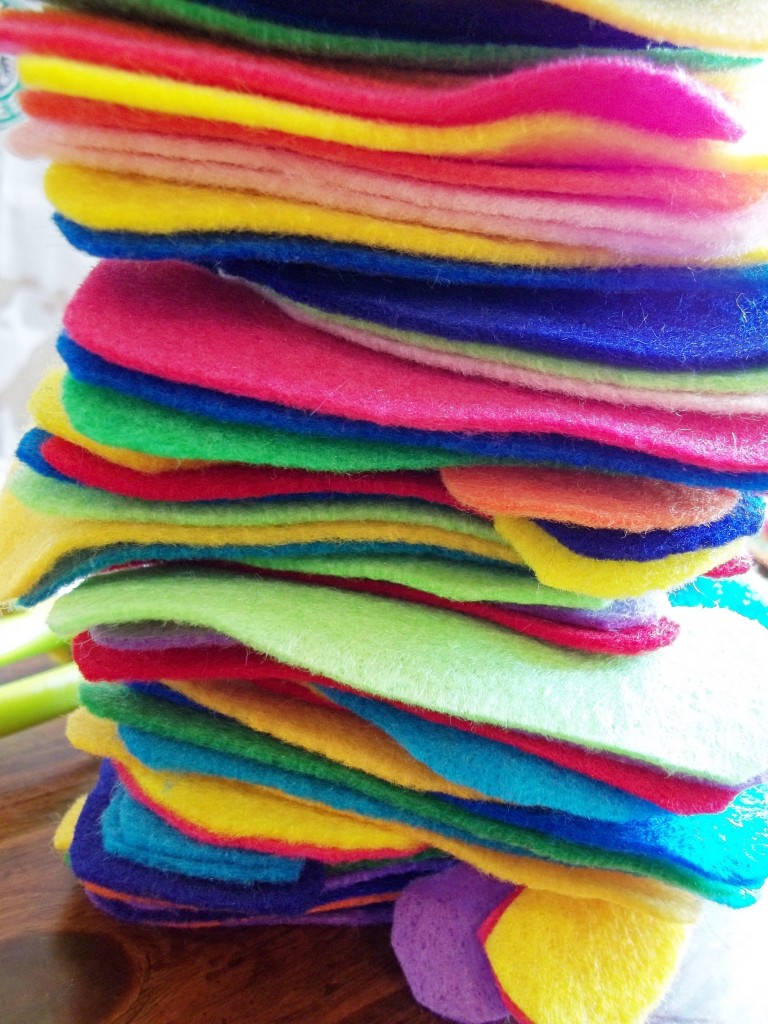 The instructions as well as a 5-page PDF alphabet template may be  found at http://www.marthastewart.com/article/abc-pillow .  I did print out the letters, I did not follow her instructions.  It isn’t that I read them and did something else.  I just did what seemed natural without readingher instructions and perhaps we did them similarly?

For each pillow I bought a 36″-square of white felt at Michaels.  I also bought 6 29-cent felt rectangles in various colors.  That way, I was able to not only provide each girl with a full alphabet set, but also extra letters for spelling their names and other short phrases if they so desire.

First I cut out the letters (2 at a time).  Not really that fun, but the fun time is coming! 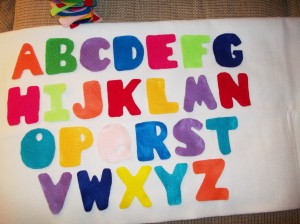 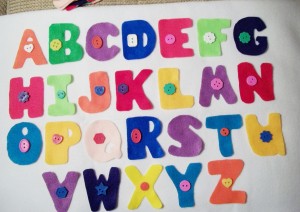 Then I laid them out on the folded white sqaure and just sort of eyeballed the placement.  when it seemed right, I cut off the excess fabric on the right and cut the folded piece in half.  To decide on button placement (don’t be thinking you can just measure out an even grid and have it work, no, no!), I held a red Sharpie just above each letter halfway between the top and bottom verticallt and halfway between the fattest pasrt of the letter.  So, like the “L”, the dot would have been right in the middle of the left part if it, the up-and-down line.  Does that make sense?  then, I’d pull the letter away and plop a red dot right on my white felt where I wanted to center the button! 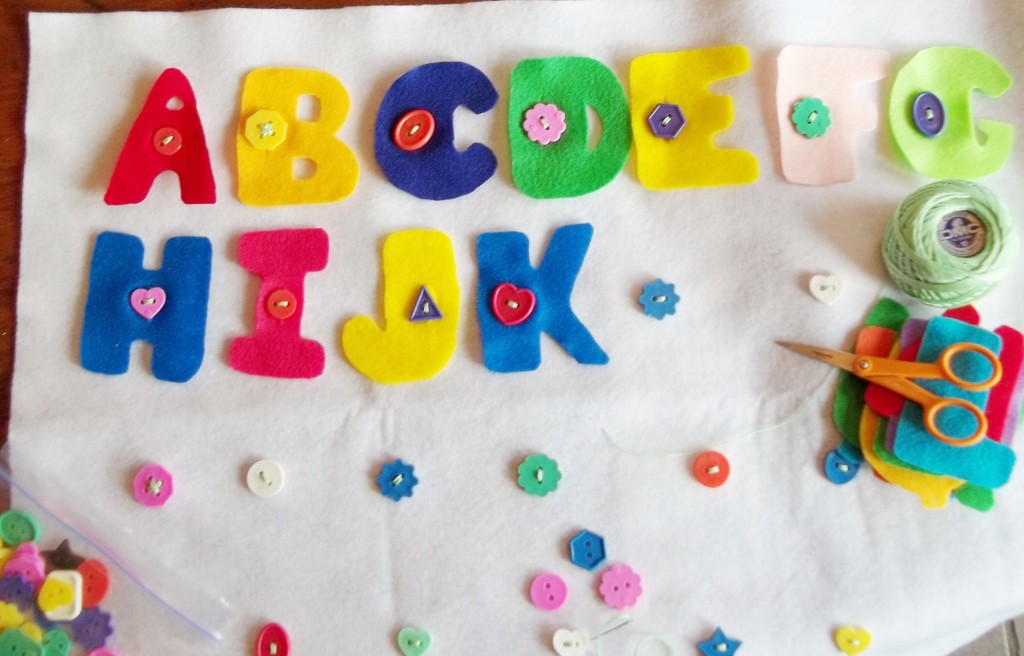 Next, I used buttons from my 1-cent bag, as recently purchased at Michael’s (it was clearance marked for $2.99 from an original $5.99) and sewed them over the red dots twice through each hole using doily-type crochet yarn.  Since, unlike Martha, my buttons were a variety of shapes and sizes, I just made a mental note as I sewed them which letter they were for.  The “I” needed a smaller button, but the “Q” could be pretty sizable.

By the way, I should mention, I did not plan out letter colors or button placement.  I just let it happen.  When I was cutting letters, I first just made little felt piles for each and mixed and matched.  The buttons I grabbed randomly from a little pile of buttons.  I just let whatever wanted to happen, happen because it was all going to be a bunch of color, any! 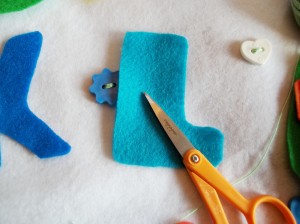 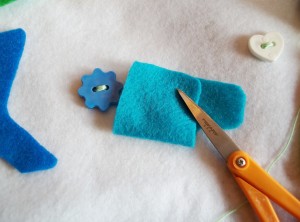 Next, was cutting the slits for the letters.  I did not use the templates here.  I just fold the letters in half, top to bottom and made a quart-inch cut vertically in the widest part of the letter. 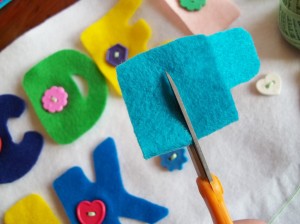 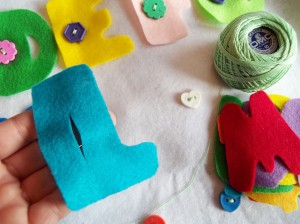 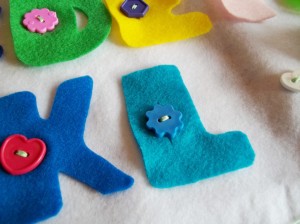 Once the buttons were all on.  I sewed a felt “envelope” on the back of the pillow for holding extra letters when not in use, then sewed a straight seam around 3 sides attaching the front to the back.  Stuffed with a little poly-filling  (and a bunch of love!) and one more seam to close it up and voila! 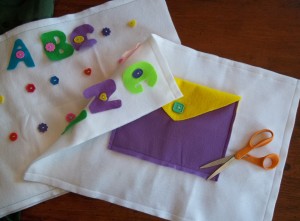 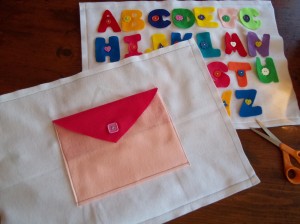 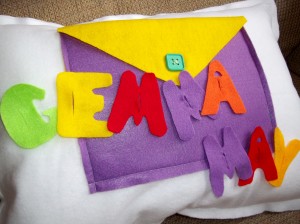 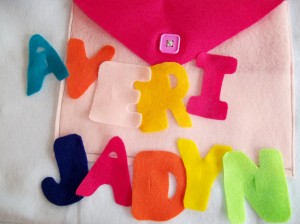 It is all very non-scientific.  Just a fun way for my girlies to practice recognizing their alphabet AND becoming proficient at buttoning!

Thank-you, very much, Martha Stewart, for the cute little idea. 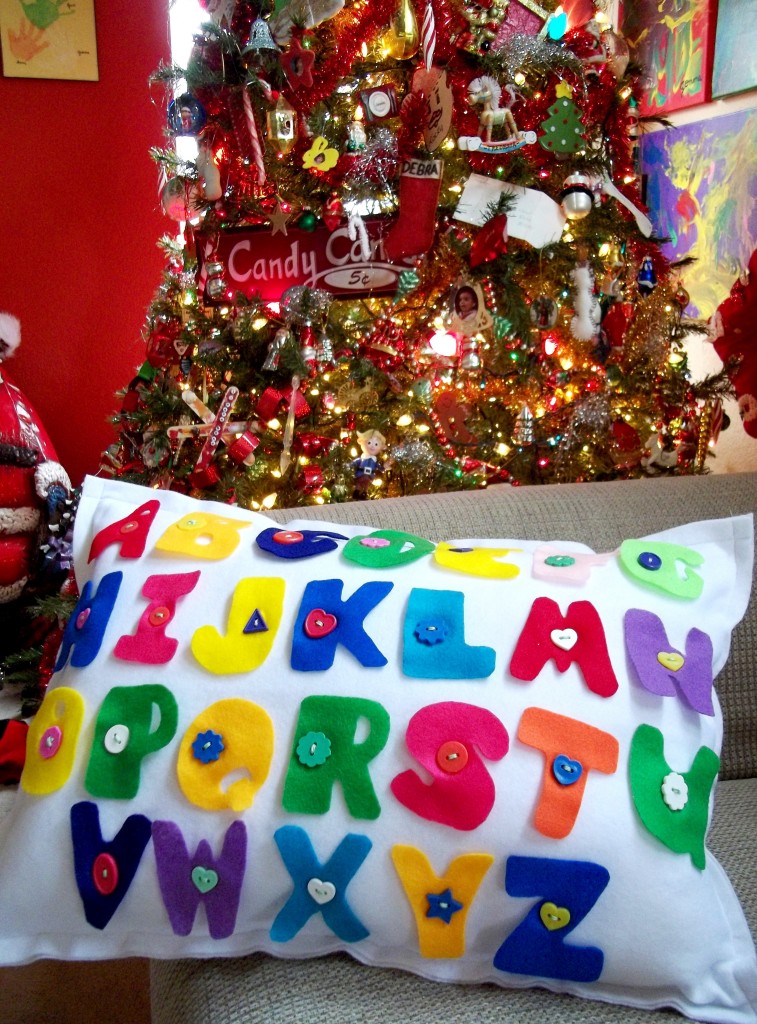 Gemma’s finished pillow.  The “family keepsakes” tree is in the background.  It is out “little” tree, jam-packed with all kinds of love and memories.  See Rocky as a baby?  My kindergarten sock?  How about the ornament from Stef & Wrex?  And the tiny place-setting from Amy Jo?  There is a snowflake Hunter made me and Stormie at 6 in a little felt bunny “frame.”  It’s full of homemade and vintage and even a letter to Santa is tucked in to the branches.  *sniff, sniff

A Christmas present I shall be making for 2 young grandbebes, who shall remain nameless, but may or may not be pictured in this blog post (thank-you, Martha Stewart, for the idea) sent me to Michael’s…where I bought a bag of something I’ll need (which I can’t tell you in case said grandbebes read this! ;p ), which is usually $5.99, however was on a clearance table for $2.99, but when in fact, I went through the check-out, was only 1-cent.  That is right!  One red penny. 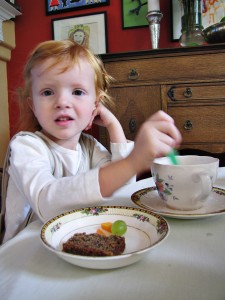 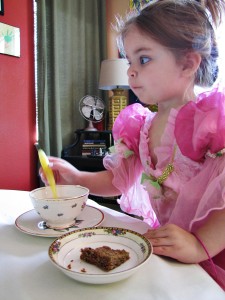 I sense God’s smile on this project.  I’ll give you a sneak peek later.  Shhhhhh…..

Designed by Vistaprint
Hmmmm….Dear Vista Print – I think that should say days-HOURS-minutes-seconds?

Thank-you to my daughter Stephanie for the chalkboard paint recipe listed in the comments after this blog post and to Martha Stewart Living for this recipe:

Custom Colors How-To
Start with flat-finish latex paint in any shade. For small areas, such as a door panel, mix 1 cup at a time.
1. Pour 1 cup of paint into a container. Add 2 tablespoons of unsanded tile grout. Mix with a paint stirrer, carefully breaking up clumps.
2. Apply paint with a roller or a sponge paintbrush to a primed or painted surface. Work in small sections, going over the same spot several times to ensure full, even coverage. Let dry.
3. Smooth area with 150-grit sandpaper, and wipe off dust.
4. To condition: Rub the side of a piece of chalk over entire surface. Wipe away residue with a barely damp sponge.

Some of Martha’s projects with custom colors:

Here is a pretty interesting dining room I ran across.  It almost looks like it is in one of those old schoolhouses people buy and turn in to homes.

These kid spaces/projects are cute (in the third picture, it is hard to see, but it is also the toy chest sporting the chalkboard surface):

Two unique uses:  A mudroom locker (wish I had one of these!).  The quoteable laundry/linen closet – a door filled with inspiring words, right where you need them the most.

A bathroom that welcomes graffiti.  A green chalkboard wall where you can draw on the stuff you don’t actually own.  And a wall to keep track and keep your stuff.

Quick, somebody tell me why I keep loving this room!?!:

The chalkboard paint yet awaits…Jeanie