I recently announced my apparent connection to both 2010 Super Bowl teams.

You can read about that here.  Not that I am taking credit for either team making it to the top, but I did live less than an hour away from both Indianapolis and from New Orleans at various times in my life.  I am just saying, I seem to be a common thread for football greatness.  Not the only one, but a common one.

So, the question is posed, “For whom will Jeanie root during the Super Bowl?”  I know this has caused much concern for many people, especially since everyone knows that not only do I not get football, I don’t ever even watch it except long enough to pass by and say “Those are some stinking tight pants,“…AND in light of the fact that I once had life-threatening food poisoning following a Super Bowl party.  Yes, there has been great speculation about my loyalties.  Which is really a moot point since I don’t do football, for crying out loud.

Really, the question should be: who will win ~ And whether I have the ability to influence that outcome, and it is obvious I do and I shall.  So, my choice is?…

Well, people, come on.  I wrote that previous Super Bowl post, which was the first time in over 800 blog posts football has e-v-e-r been a topic, right after the Saints beat the Vikings in that fairly spectacular overtime win (the field goal ring a bell?).  And I added gold letters to the black font to leave a little trail, a clue as it were,  for the future.

THEN this week, an old family friend* from like ~  30-gazillion years ago (who once played Jesus for my dad’s Palm Sunday and Easter productions, first by riding up to the church wrapped in a white sheet on a donkey and later, hanging on the cross in possibly the same white sheet, before going on to utilize that divine-wig plus a red bandana at a church dinner-on-the-ground to emulate a Willie-Nelson-type character) sent me a Saints shirt {annonymously} in an effort to sway me.  Additionally, my brother Joe-the-pastor has been telling me the Saints are God’s team and very persuasively backing it up with scripture:

1 Sam 2:9  He will guard the feet of his SAINTS, but the wicked (Colts?) will be silenced in darkness!

Psalm 16:3  As for the SAINTS who are in the land, they are the glorious ones in whom is all my delight.

Psalm 149:4,5  For the Lord takes delight in his people; he crowns the humble with salvation. Let the SAINTS rejoice in this honor and sing for joy…

Daniel 7:18  But the SAINTS of the Most High will receive the kingdom and will possess it forever- yes, forever and ever.

Rom 8:27  …the Spirit intercedes for the SAINTS in accordance with God’s will.

So who is it going to be?

Well…The Saints have that cutie-patootie, Drew Brees.  But the Colts have Peyton Manning.  I don’t know a darn thing about him myself, but several sportscasters seem to adore him.  I liked a lot of people from Indy when I lived there, though Louisiana boasts the most interesting of characters.    Hoosiers are good, middle American people.  The mosquito rules in the Bayou.  All these things must be weighed in the balance.

But the deciding factor for me?  The food!  Seafood Gumbo, Red Beans and Rice, Roast Beef Po’ Boys, Jambalaya, Crawfish {pie…which I have never actually had}~Omygosh (or me-oh-my-oh, like the song says).  Hands down, the SAINTS are winning the Super Bowl and I give them my full support!  Yes.  Because of the scrumptious food.  I have spoken.  I may not watch the game.  But the common thread has decreed it so. 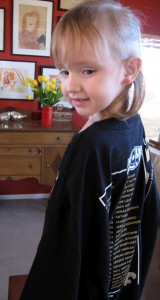 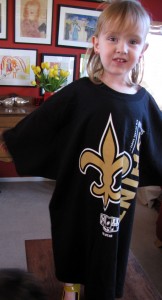 The crowd goes wild with approval (or whatever).

PLUS – no one from Indiana sent me a t-shirt.  That hurts.…Jeanie…WHO DAT?, indeed… 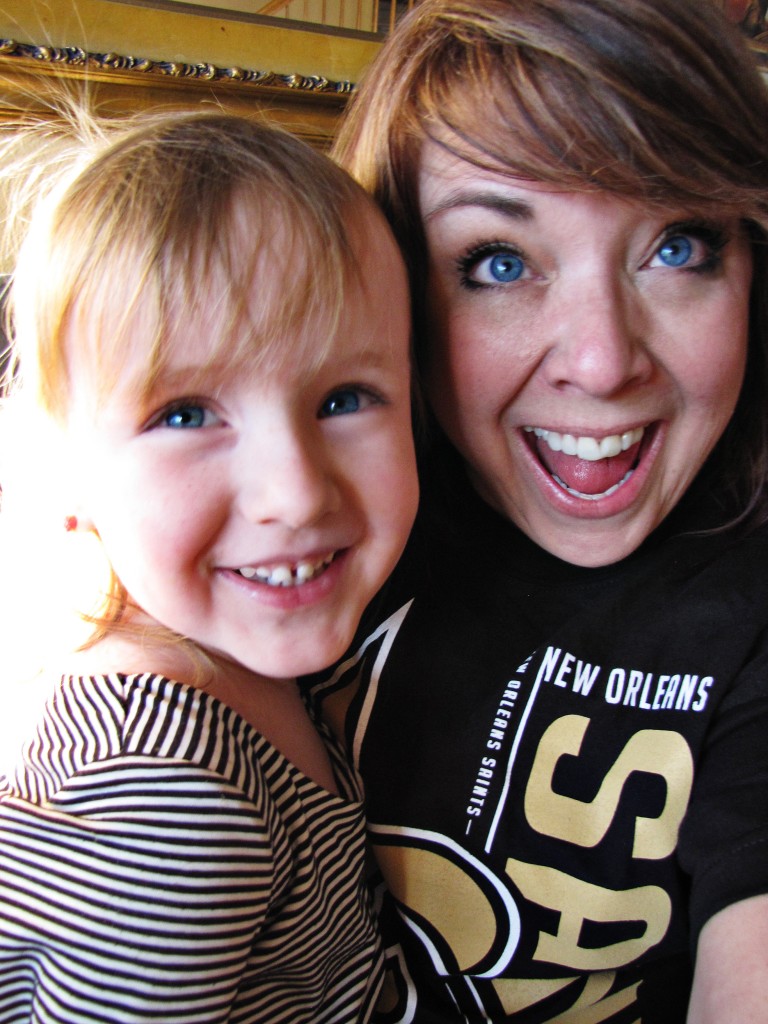 *”A Saints fan” from Robert, La-you know who you are…Thanks for the EXTRA-LARGE t-shirt. 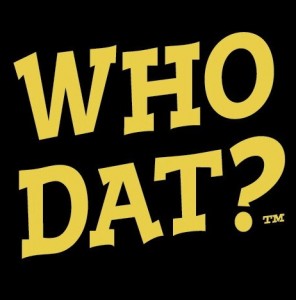 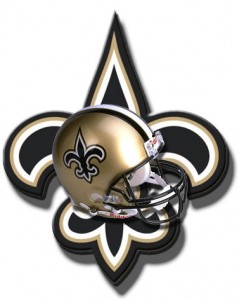 Pictured: Guini modeled the shirt in matching shoes.  There is a full roster on the back.  I have never heard of these people.

6 thoughts on “WHO, the question seems to be, DAT?”