It isn’t really black.  I wanted a gray, but I hate cool, cold grays.  That is prison.  I wanted a warm gray, something I could live with.  Almost like a well-erased chalkboard, but not.  I also have seen beauty in charcoal briquettes – variations as they burn from jet-black to white hot, so I said, “I want a dark, almost-black wall.  It has to be warm and ‘read black.’ But it can’t be cold and rigid.  There has to be warmth and drama, and really excellent contrast.  Contrast is key.  But warmth for sure.  Don’t forget warmth.” 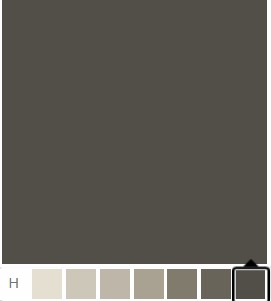 You can actually Google that color and there are so many images of it.  The best use of it is found at www.emilyaclark.com.  It sort of looks dark brown when you open the can, but then it is gray-a warm charcoal (almost black) gray.  I liked it so much, I did two walls.  One in the family room (it used to be red).  And the stairwell wall going upstairs.  Two different rooms.

There are going to be white-framed mirrors filling this resplendent Urbane Bronze wall.

There was this little accident

“Most accidents occur in the home,” we have all heard.  Dang it.  It’s true.

So Dave was painting the stairwell wall this oil-rubbed-dark-bronzey color that I am head-over-heels for {did I tell you about Urbane Bronze?  Yes?  Ok, then}.  It came time to paint the very vital edge of it – the place it would meet the creamy-white of the ceiling.  Of course, that has to be pristine in every way.  There can be nothing short of perfection in the edges.  The edges are the glorious contrast and distinction of this paint job.

But the ceiling over the stairs slopes down slightly from a 16′ high peak.  And Dave could reach and tape a good portion from a ledge at the top of the landing.  And he could reach the heights from the floor on his 8 foot ladder at the bottom of the stairs.  But there were these 8 feet in the middle…

We tried something.  It didn’t work like we had hoped.

Do not jimmy-rig a “quick” scaffold from found objects, plop a small ladder atop and think, “Wow-this is working great.  No problem.”  Because it might not actually be so, moments later. 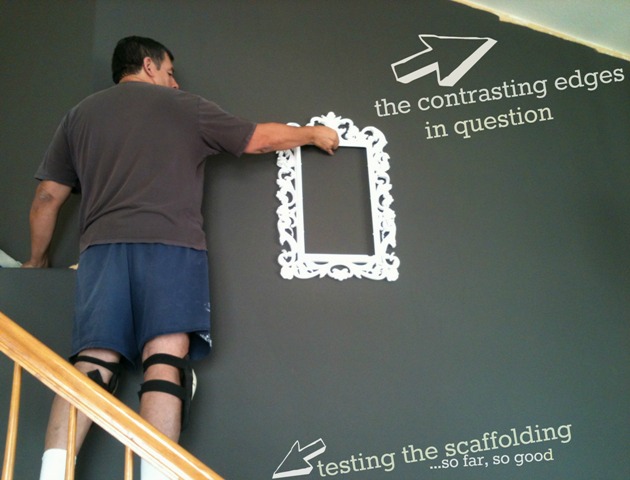 Dave – shown here holding one of the frames that will be getting mirrored so I could begin to imagine the beauty of this Urbane Bronzed wall filled with white-framed mirrors.  This is when we thought our plan was working, just minutes before it turned out not to be…

Anyway – it sort of collapsed, and a 2″ x 8″ x 6′ board hit my right cheekbone {very} near my eye at about 300 pounds of speed and force and Dave eventually (because I saw it in slow-mo) dropped onto the tile floor on his noggin and got a headache.  My eye swelled like an egg, so I iced it for 15 minutes, removed some wood from my finger (which was bruised black by the iPhone I was still holding when the dust settled – even though my glasses were across the room, neatly folded and didn’t even look like they just been hit by low-flying lumber).

First I cried because I thought I’d killed my husband just to have my Urbane Broze wall.  Then, we laughed about it {wearing an eye patch for the rest of my life because I’d lost an eyeball just would not have been my style at all} and just resumed our work.

But as the day wore on, my eye turned into a full-fledged, good, old-fashioned shiner and my face swelled up.  Then Dave’s ribs started feeling sore and his ring finger turned a really terrible shade of gray – the exact shade of gray I wanted to avoid on my walls at all costs.  It took us awhile, but we finally convinced him to go to the doctor.

But not before he started painting the next room and mowed the lawn and all that stuff.  :)  He just made an appointment for two days later and went on with life.

Blood work and x-rays and answering lots of questions revealed cracked ribs on both sides, a bruised head (no concussion, thank the Lord) and a broken, gray-black-purply ring finger  (plus some very bad blood sugar numbers – I knew it).  Nothing terribly serious, but I have a feeling the momentum to paint the whole house just got the air let out of its’ tires.

On the bright side

We had already decided to re-stain and paint the banister and railings to rid them of the awful orangey-pine look and even though that was going to be a project at a later date, but, since the wood that hit my face first shaved off an eighth of an inch of finish and wood on the railing top and broke a couple of spindles, too – that project gets moved up.  Isn’t that fortuitous? 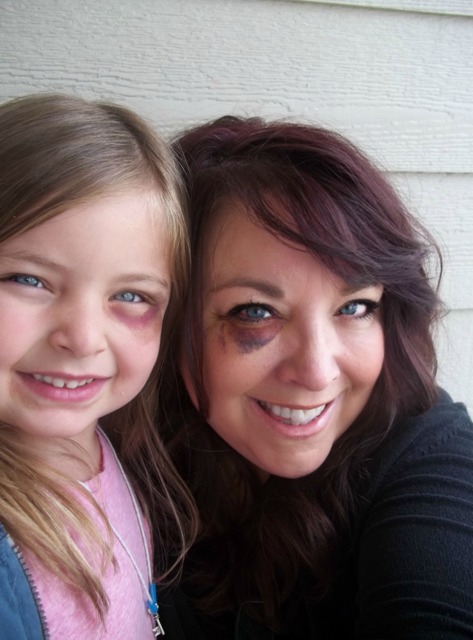 Averi is here for school today and she got a matching black eye to make me feel better…when I discovered that my normal everyday eye shadow contains all the colors in my black eye.  Hmm….

Geesh.  We are now most certainly a statistic of accidents at home, sweet home.