Best song at the Oscars this year was, surprisingly and mercifully, a GREAT song ("Falling Slowly") from the movie "Once."  My daughters, Stephanie and Stormie introduced me to the movie a while back and it is a great flick!  For the first 20 minutes, I was enjoying it so much I was dreading when the "real story" would start and interrupt the music, then Stormie informed me, it was, after all, a musical.  It is gentle and pure and soft and well-told and you must see it!  You must sing along with it!

See scenes from the movie and hear the song here: http://youtube.com/watch?v=CoSL_qayMCc 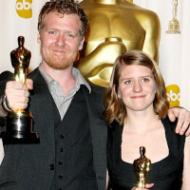 From The UK Press:

Former buskers Glen Hansard and Marketa Irglova are thrilled with their Oscar win for Best Original Song."When we were kids, we used to watch the Oscars every year and talked about what people were wearing," Glen said following the win. "It's amazing to be here tonight."

Marketa and Glen won the gong for their song "Falling Slowly" from hit indie movie Once which they performed at the Academy ceremony.

"There's things you have to do," said Glen, referring to the performance. "You have to keep going. If you think about the size of it and if you get swept up in it, you're gone."

Glen and Marketa beat off three separate challenges from the movie Enchanted to win the statuette."My mother was sitting beside me and she was just so nervous – she's been so nervous since we were nominated," said Glen. "I was just welling up."

"These days films are being made for different reasons like money, and art is being compromised," added Marketa. "I think people feel this film was done from a very pure point and an artistic one. I also think it's a story of love and we can all connect with that."

NOTE TO SELF: "sing your melody, I'll sing along…"