Dave hauled these in from the cassette graveyard-mausoleum, also known as the garage: two heavy-duty totes filled at least 2/3 the way up with old cassettes.  Yes, cassettes! 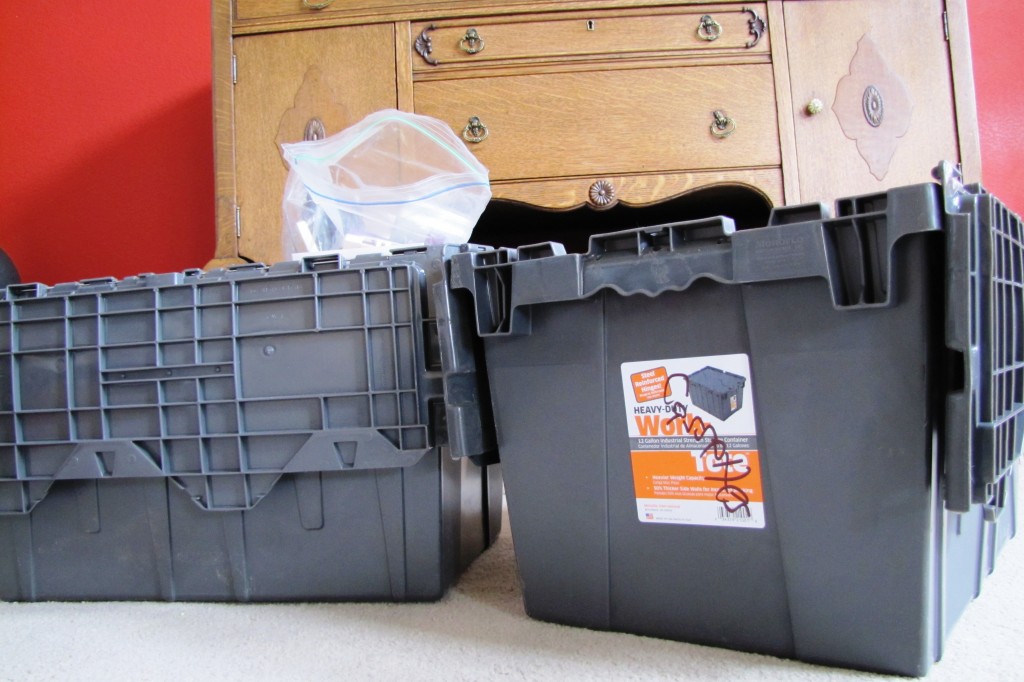 Why do we have them, you wonder?

I have no answer.  Except to say that when we moved to this house, we actually did still use some of them, along with our growing CD collection.  Most of our “players” at that time played both CD and cassette – remember that?  It was more than 10 years ago and honestly, we had already thinned it out when we moved – gotten rid of tons of soundtracks (from our church-performance singing days, haha) and many other cassettes.  We felt we had organized to the bare essentials…apparently not, though.

As one by one, cassette players broke down or got sold in a former car or two and as we started buying CDs exclusively, Dave just put them in these totes “for later.” 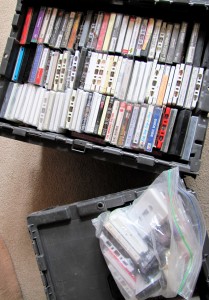 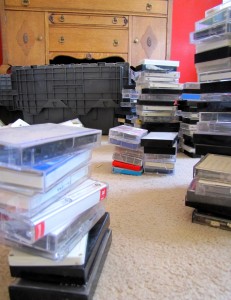 The other day he hauled them in, hooked up an old stereo cassette player he found hiding in the garage rafters to the surround sound and told me to have fun.

I have the Bee Gees and multiple Kenny Rogers tapes, Deniece Williams, The Rocky Soundtracks (“Eye of the Tiger”),  Michael Jackson, Elvis,1980s mixed tapes, 1970s mixed tapes, tons more performance soundtracks (everything from Sandi Patti to Brittany Spears and back, but mostly Christian or wedding-type), kid’s worship tapes and Sunday School songs, many Christian artists like Reba Rambo and Steven Curtis Chapman, Carmen (of course!) and lots of the old Hosannas! Integrity worship recordings from the 80s when they had that $4.99-each tape-of-the-month club deal.  I was a charter member!  :) 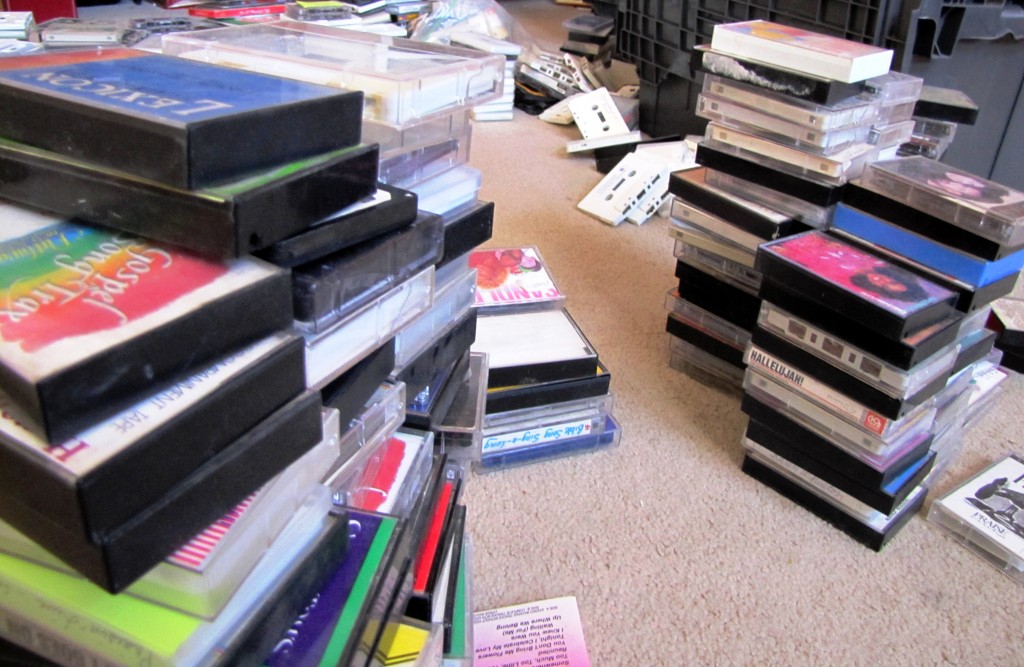 There may even be tapes of me speaking.  I know there are some of me singing with a Catholic group I was in (Parousia) back in the day.  Dave was in the college group, Chara and before that here in Denver with The Gospel Lights and we have tape of them.

There are health and diet tapes, work-out tapes, Word of Faith tapes from the 1970s with people like Kenneth Hagin (Dave brought these to the marriage) and Marilyn Hickey before she was known around the world (kept them purely for the historical value).  We have books on tape (Louis L’Amor and O. Henry, to name a couple).  There are tapes that were taped over and crossed out so much I don’t know what is on them.  There are “keepsake” tapes like the recording I did for Sacred Heart Academy (my first studio experience), “In the Sacred Heart of Jesus” and a whole bunch of cassettes of my children when they were young.  Some I captured as they were babies, cooing and being sweet.  Others were them, as they got older and loved to tape over EVERTHING to create radio shows and do interviews and just them being silly. I cannot wait to dig into those and listen!

Oh but some…yikes, might have been better never found.  There is this one of Dave and I singing at the church in Kokomo and ya know – it was the day of Sandi Patti trilling all the way to an octave and half above high C.  I was a low-voiced girl, better suited to Karen Carpenter’s range, or Anne Murray, or even Amy Grant.  Oh, but Sandi was all the rage so I had to do it, didn’t I?  Oh-horrible, painful, awful to listen to.  Ugh!

What the heck will I do with all of these cassette tapes?

Oh my.  Well, I will get rid of many-many-many of them.  But I will also make sure that the ones I find with music I cannot live without is still available on iTunes.  If not, I will digitize them.  And of course, I will digitize all of the ones with my kids and other keepsake-types (a recording of my sister in her college touring group, let’s say).  I will digitize anything with my father’s voice and powerful words, of course.  I will sort and decide…sort and decide…at some point I will probably get overwhelmed and want to throw it all away all at once.  But instead, will place what stays for the time being back in the cassette-casket for another day.

But I do have some special plans for a lot of those old performance soundtracks (what we would now call “karaoke”).  Oh yes!

Before getting rid of them, I am calling the family together and we are going to hook up the sound system and sing!  Oh yes we are.  Do not try to argue with me about this, kiddos.   I found “Testify!”  Hahhahaha.  Early 90s…everytime we visited a different church, it was always requested for the Rhoades family to come up and sing.  :p  Can you imagine?  Dave and Jeanie (big, red, sparkly hair – to signify the “anointing,” I have to laugh at myself) and 5 little ones, ages 5-12 or 13 singing loudly:

He has made me whole, put joy down in my soul

Omygoodness.  Yes, that is one of the things I will be doing with these historical relics, these compact little pieces of my history.

With so many hundreds of cassettes surrounding me, you’d probably be surprised to know there are some I remember that are gone, lost, and I can never replace.  These shown are only a fraction of all that Dave and I owned over our lifetimes (I got my first cassette recorder for Christmas when I was 14, for goodness’ sake) and only recently, I had been collecting cassette images for a new little thing for this very blog (yet to be unveiled).  The time is right to remember.

Do you know why these two things go together? 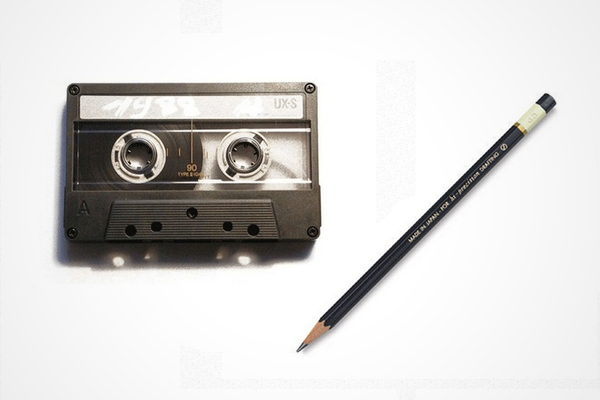 We used to listen to cassettes.  We did.   Remember?…