The Father of Christmas

There is some great stuff out on the web particularly dissecting and thoughfully interpretting C.S. Lewis’ Father Christmas character, a man in red who brought what was needed to defeat the witch and make way for Aslan to usher in the Christmas celebration and end the Winter of the World.  He represented the coming Hope of the world, the great anticipation symbolized by the evergreen Christmas tree standing strong against the skeleton trees of Winter.  The Narnian Father Christmas brought the beavers and the children gifts, not like the materialistic Turkish Delight which, after consuming, caused the devourer to crave more and more, but he brought what they needed: weapons to destroy the evil of the white witch.  People who delve in to C. S. Lewis’ grand factastical allegories understand much more than I ever will.

But I thoroughly empathize and understand the longing in children’s hearts around the world and through the ages who have longed for a father to love them, a father who believes in them and knows how to give them good gifts.  That isn’t hard to comprehend, is it, in this day and age where so many children are raised in fatherless homes or homes where a man resides, but does not lead his family, does not fulfill his call? 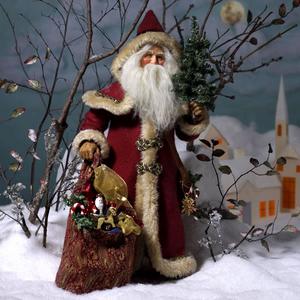 I grew up around Christians spending their time trying to prove Santa was a tool of Satan (and if you move a couple of letters around, “doesn’t it prove Santa is Satan??!”) and the point has been missed, truly.  The point has been misunderstood completely that while the Santa Claus our commercialistic society has created does to seem to garner more focus than the Son of God himself, though it is supposed to be Jesus’ birthday we celebrate,  isn’t Father Christmas, or Santa Claus also a representation of the longing in people’s hearts for a daddy who loves them, makes them laugh and delights in them?  One who’ll give them what they need to defeat the woundedness and evil in their worlds?

Father God IS the Father of Christmas who gave Jesus.

You have a Father who is happy.  He thinks well of you.  He rejoices over you with singing.  He delights in you and knows how to give you even better gifts than what an earthly father could (Matthew 7.10-12].   He’ll give you all you need to defeat the enemy of your soul.  That is a lot of HOpe!