When I moved in to this house almost 7 years ago, I was going for “Cathedral of Cool,” or “Sanctuary of Style” in the living room.  It was always a sanctuary for me.  Much worship has reverberated around the walls and off the ceiling in that room.  I filled it with crosses and artifacts from more formal religious backgrounds than mine and dozens and dozens of candles on weighty stands, a la Tuscany.  We lit enough candles to heat the whole house, regularly!  No one I knew had that at the time.

Then everyone did.  So, I have scaled waaaaaay back, but still love the symbols of my faith in there.

I had also swiped a quote about a house in some magazine that I wanted to adopt, but really haven’t:  “the house is an exhuberant mix of fantasy and tradition“.  So that remains.  Traditional, I can do.  But I am going to have to let myself get a little crazy for the fantasy part (I have always wanted the courage to have tangerine walls).  And it seems enough of a project to take me through the next decade. 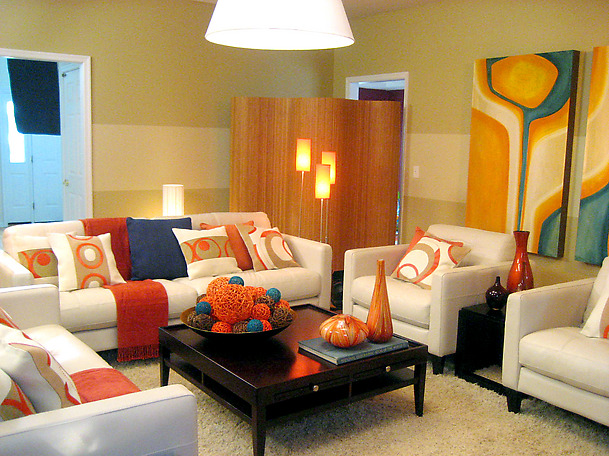 Early marriage was Asian-influenced.  Then a brief bout with country blue and mauve (like a brief bout with the flu).  Then I went bold, traditional.  Then there were the Victorian days – that consumed a bunch of me.  Then I settled for Suburban Chic (which isn’t) and then I realized I am traditional in many ways, but loooooove the modern lines, too.  Especially the vintage modern like Thomas O’Brien does for Target, sort of the 30s, 40s modern, aerospace, smoking jacket, cool…?

But recently, I took the HGTV What’s My Style? online e-quiz and this is what they said:

“Your style is Classic Casual

AKA Transitional. A mix of contemporary and traditional. Usually updated, graceful, enduring.”

And that seems good to me and I think they are lovely for saying so.

pictured: from the HGTV website.  I could never pull this off and not sure I’d want to, but I surely cheer on the people who could!