"Let him kiss me with the kisses of his mouth…for your love is better than wine." Song of Songs 1.2 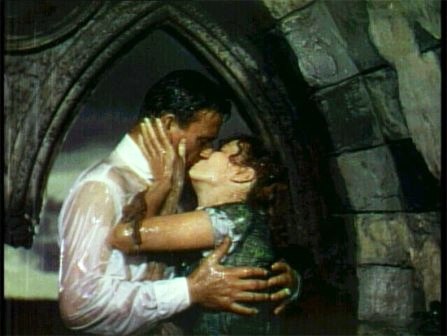 I first became fascinated with kissing as something other than sweet parental affection at about the age of four while watching an old Western with my mom. It was 1964 and there was some scene between a cowboy and a saloon girl (they all seemed good and wholesome back then) and it just clicked – wow, this kissing thing is going to be fun.

I kissed Jimmy Green behind the church after a Sunday night service when I was 13 (my first and his, too) and I don't really think he knew what hit him.  But I knew I liked kissing alot!

Lucky for me, I married a really, amazingly good kisser so –  life is good!

With Valentine's Day approaching, I thought I'd list some of my favorite movie kisses.  Some are well-known for the kissing scenes and others are not – just small ones you may have missed.  I left out many "obvious" choices, ones that might make an "awards" list, but these are the ones that immediately come to my mind, in no particular order:

The Quiet Man  A quintessential St. Pat's Day movie experience: Sean Thornton (played by John Wayne) is in a perpetual tussle with the blazing-red-headed Mary Kate Donaher (Maureen O'Hara) when he arrives in Ireland from America.  Their first, and perhaps most picturesque kiss, he drags her back into the cottage from roaring winds and kisses her solidly, their clothes and hair blowing, a gentle moment and then a good slap to his face.

One of my favorite quotes and kisses, though, is on their wedding night when she accuses him of being a coward for not fighting her brother for her dowry and she locks him out of the bedroom. He, manly man that he is, kicks the door in, kisses her and throws her onto the bed (which breaks) saying, "There'll no locks or bolts between us, Mary Kate – exept those in your own mercenary little heart."  He walks out slamming the door, she cries – wanting more kissing, I'm thinking.

The next morning, the matchmaker, seeing the broken bed shakes his head, "Impetuous!"

pictured above: a kissing scene from The Quiet Man I didn't even mention, but suffice it to say: John Wayne was looking good!

Baby Boom  From the 80s, it has one of my favorite kissing scenes.  Diane Keaton is playing a driven career woman who tried to move to the country with her "newly acquired" baby, but found that she was miserable and lonely.  She accidentally confided to the handsome town Veterinarian, thinking he was a "real doctor," and then spent lots of time avoiding him and snubbing him as she notices all the other females around swoon in his presence.  One night he pulls in behind her on the side of the road where she is struggling to change a flat tire in winter snow and ice.  As he is trying to be kind and she is rebuffing him, refusing his help, he grabs her, smashes her against her car and kisses her, where you see her body go limp.  Then he gets in his car and drives away – leaving her weak and disoriented.  Classic Diane Keaton.

Witness  Mid-1980's, I have got to watch again!  The handsome Harrison Ford as the lawman recovering from a gunshot wound among the Amish and the beautiful Kelly McGillis as an Amish widow.  They meet in a field at twilight the evening before he will be leaving.  They grab and claw and kiss, but then pull back laughing, their foreheads pressed together.  Sweet.

That Thing You Do  Guy and Faye (played by the beautiful Liv Tyler, of such kissable-lip-fame).  Guy:  When was the last time you were decently kissed?  I mean really, honestly good and kissed?  Faye: Dave Gamelgard, New Year's Eve, 1962.  Guy (determinedly nodding his head): Okay.

One Fine Day  Imagine that gravely-voiced George Clooney saying to Michelle Pfeiffer: You're just reeling me in, aren't you?  Mmm,mm, good!

It's A Wonderful Life  This sweet, old-time movie has one of the hottest scenes ever as George and Mary (Jimmy Stewart and Donna Reed) are squeezed together sharing the same phone in a conversation with the irritating Sam "HeeHaw" Wainright, the guy Mary's mother hopes she'll end up with.  The romantic tension builds as you actually see George's torment emerge.  He knows if he kisses her, he'll be giving up everything for her, especially his chance to "shake the dust of this crummy little town off my shoes and see the world!"  Finally, both weak and desperate, they give in to a kiss that is equally raw with desire and passion, and angry at the same time.  Pretty steamy for the era!

Room with a View  Miss Lucy Honeychurch got an unexpected and impetuous kiss in a wheatfield by the intense and free-spirited, George Emerson.  How good was it?  Well, it led to the break-up of her engagement to the prissy Cecil.

The Village  Lucius and Ivy on the front porch – deep, but reverent passion between childlike hearts.

While You Were Sleeping   The actual kiss doesn't come until the end, with an engagement ring, but the lead up where it almost happens, when Jack (Bill Pullman) is asking Lucy (Sandra Bullock) about Joe Fusco Jr. and explaining "leaning" to her…nice!

The Notebook  "It wasn't over…it still isn't over!"  This movie is kind of packed with kissing, covering more than one generation, but the rain-soaked kiss after the idyllic afternoon row-boating through a spectacular duck-filled pond is THE one!  Allie (Rachel McAdams) learns as they are coming ashore that Noah (Ryan Gosling) had not forgotten her, but had in fact written 365 love letters-one for each of day of the year-which her domineering mother had intercepted.  When they both realize "it still isn't over!", so much for her engagement to the "acceptable fiancee" as the kissing ensues.  Hot.  Hot.  Hot!  A little embarrassing, really.

Love Actually  The final-scene montage of a zillion happy endings is filled with kiss after kiss at London's Heathrow Airport.  There are kisses between parents and children and between friends and lovers – all on a split screen to the song, "God Only Knows," by the Beach Boys.  Joyous!

I recommend doing a lot of kissing!…Jeanie

NOTE TO SELF:  Dave's kiss is "on my list as one of the best things in life."  More kissing!