I probably started fantasizing about being a bride and being married right about the time I started having memories that would stay with me.

I am a romantic.

I love love and I love songs and stories and the energy of it.  And as far back as I can remember, into that twinkly-gold-flecked-slightly-8mm-film memory haze of the early 1960s, I would imagine being married.  At 3, naturally, the groom was a figment of my imagination, “Joe Penny.”   During my daily nap-time at 3 or 4 years old, I would imagine being married to to this phantom Joe Penny and how my name would be “Jeanie Penny.”  I imagined being a housewife, except all done on my little play kitchen, with my little play dishes, me in an apron, as would have have been indicated by the black and white movies of the time.  Joe Penny would go to work daily while I puttered about in the kitchen and he would return home where fresh iced tea would await him..  Wouldn’t married life be lovely?

{Remember Joe Penny, the actor who emerged in popularity in the 80s?  Well, there he is, I thought.  My 4-year-old-fantasy husband.  Yes, he would have done just fine.}

And as I got a little older, I still looked at boys for the suitable husbands with acceptable last names they might be.  And I never thought about it in terms of us being grown up, no.  Somehow I was certain if the adults around us would just support us a little, we would undoubtedly be able to have a very successful Leave-it-to-Beaver-home-in-the-suburbs existence.  I was quite certain, even though I really had no interest in the domestic arts otherwise, if I could just marry the object of my current affections, I would be transformed into a virtuous and quite accomplished wife, dusting, cleaning, ironing and preparing dinner.  Naturally, mature as I was, I also anticipated hand-holding and a kiss here and there.

Here is what girls do.

Am I supposed to reveal this?  Is this a big secret?  Well, I am telling.

So – there is a boy and you deem him cuter and sweeter and funnier than all the rest and he is nice to you and so you start writing his name on pieces of paper and eventually you write your name + his name and then the inevitable: your first name + his last name – you know, practicing, just in case you need to write a check with that name someday.  Yes.  This actually happened all the way back, from the time I could write.  For from the youngest days, I knew Moslander was just too difficult a name to bear, so, since I can remember, I was auditioning possible names along with the cutest boys.  Yes, I was.  And that is common among romantic girls.  Shocking, I know.  But true.  Feign to deny it, women!

So, as of this weekend, I will have been Jeanie Rhoades for 30 years.  It has been much easier a name to carry and has been with me longer than Moslander was.  For some reason this morning, I just started remembering all the possible names I might have ended up with if only my parents and some little boys’ parents would have understood that we were unusually mature for our ages and should have been allowed to set up house.  Beginning in 1965, after the make-believe Joe Penny was no longer on my mind:

I might have been Jeanie Bricker.  Kenny was in my Kindergarten class and had brown, curly hair and a few freckles and wore that brown terry-cloth tunic-style shirt with such panache.

In first grade, I would most assuredly have been Jeanie Sutherland, married to a tall, quiet, strong blond from a holiness family down the block.  Danny often walked me home from school, protective, watching for cars as we crossed the street.

I could have ended up, during those grade school years, as Jeanie Sable or Jeanie Sandry.  There were 2 entire years devoted to being Jeanie Gray, for Kevin was o-so-dashing as 3rd and 4th graders go, in his gray slacks and Hush Puppies.

First kiss: Jimmy Green.  I would have been Jeanie Green, which is funny because of course now, my friends and fam all refer to my favorite shade of spring-green as Jeanie-green.

My junior high friends will know those years were all about being Jeanie Roby for the most adorable meaty, tall and charming president-of-the-student-body type and his size 13 shoes, Bill.  How apropo that the song, “Billy Don’t Be a Hero…come back and make me your wife,” was playing on the top 40 stations of the time.  Oh, he was a charmer and just so darn likable.

I could have ended up, had my silly girl fantasies and name-writing practice ever come to fruition, being, at various times and places, Jeanie Gonzales, Jeanie Smith, Jeanie Jenkins, Jeanie Dixon, Jeanie Martino (well, I mean – that actually almost did happen, a broken engagement), Jeanie Henderson, Jeanie Worley, Jeanie Carr,  Jeanie Wells,  Jeanie Mericsko and perhaps a few more.  Perhaps. 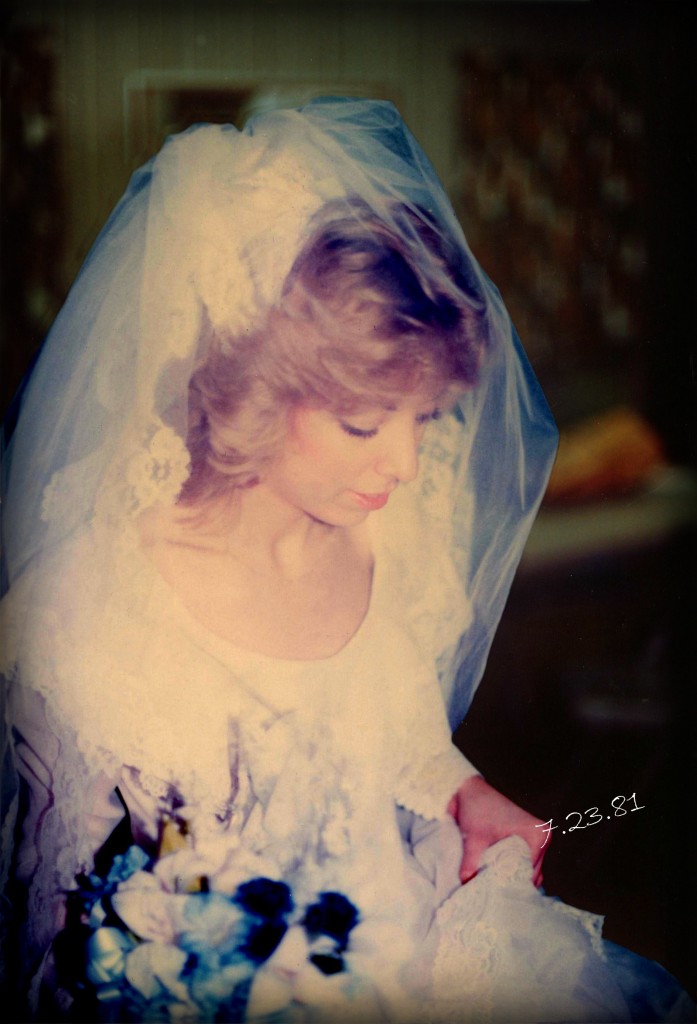 But I am : Jeanie Rhoades.

That has worked out just fine.  Still “playing house” with my husband, a Latino with a white man’s name.  It turned out that Dave + Jeanie did not equal me being a domestic machine, duster in hand and dinner on the table at 6.  And I only use an apron when Dave makes me (to save my clothes, people).  But sometimes, our life is sorta like a black and white movie with a happy soundtrack, sunshine streaming through the windows, or a really hot scene from a 70s movie I wasn’t even supposed to see back then (shhh…don’t tell my parents), or a romantic comedy with  a high-stress-level working girl from the 80s.  Sometimes not.  But mostly, crazy-good. And sweet.

Oh and I get high just holding you tight

We always dreamed we’d make a lot of money, o but

I don’t mind being poor

‘Cause when you make love to me, honey

I couldn’t ask for anymore

All our friends seem to be in a hurry

But darlin’ we’ll just keep on taking our time

Sharing  my love with you

Dave + Jeanie = sitting in a tree, k-i-s-s-i-n-g. First came love, then came marriage (in less than 6 weeks-all of that!), then came 5 kids and growing up and marriages and 6 grandbebes in the baby carriage…so far…

I am not quite as “mature” and good at it as I thought I’d be.  But I am learning.  And it is better than I imagined.

THE NAMES HAVE NOT BEEN CHANGED TO PROTECT THE INNOCENT.  No way, Hosea.  These are the real names, baby!  They are innocent of any compliance or party to these imaginations.  Their stories are their own.  These are mine.  *smile

5 thoughts on “Just My Imagination”