We decided that on route to my parent's 50th Wedding Anniversary Celebration, the whole bunch of us (Dave and I and all 5 grown kids and spouses and grandchildren) would zip up to Norfolk, NE where we once pastored (lived there for 7+ years) to look at old schools and houses and reminesce a little.  Our plans included hoping to get together with old friends and eat at our dearly-loved Valentinos Italian Buffet on Johnny Carson Avenue.

Peter and Lauren Bierer from Mankato, MN met us there (the Bierers lived there when we did), though the rest of the family wasn't able to make it.  Peter and Lauren brought along their 3D ultrasound pictures (baby due in November!) and that baby, whether and girl or boy is yet unknown, is a Bierer through and through!

Plans and any "extra time" we thought we may have had were abruptly put on hold when, as 2 year-old Guini was laying on the motel room floor singing "Oh, no, You never let go" and reading her Gideon-placed Bible with extreme intensity, an accidental fall off the bed by big brother resulted in a broken left arm (both bones broke, see x-ray if you're not too squeamish).  The whole bunch of us went in to wait mode while the experts at Faith Medical tended to our little injured princess.

Some of us were able to venture to the mall to eat lunch before heading back to the hospital (I don't think they'd ever seen such a large group of people in their waiting room for one little girl) and ended up running in to old friends, The Meikle Family: Ken and Linda, their daughters Lori and Aleisha, along with Lori's boyfriend, Aleisha's husband and 2 kids and the baby on the way.  It was nice to catch up with them and see that the girls we knew have grown into such beautiful young women. Linda's ministry made a great impact on my children's lives.  Stormie was Lori's flower girl about 17 years ago or so (see photos, now and then).

I hate that I didn't get a picture of Carla Schaffer who also happened by the food court in the mall.  Carla is an amazing woman whose prayer support and friendship is a great  memory of our time in Norfolk.  She raised a great looking bunch of 4 boys and is a grandma now, too.  How is that possible?

Unfortunately, though we bumped in to several old friends and acquaintances, we didn't get to see everyone we wanted to in Norfolk.  The kids got to see their old school: Northern Hills Elementary (see photo; left to right: Stormie, Tara, Rocky, Stephanie, Peter Bierer, Tredessa), and we drove by our 1880's Victorian home (we once won the city Christmas lighting contest) and got a glimpse of the tree under which our dog Lady was buried so many years ago. 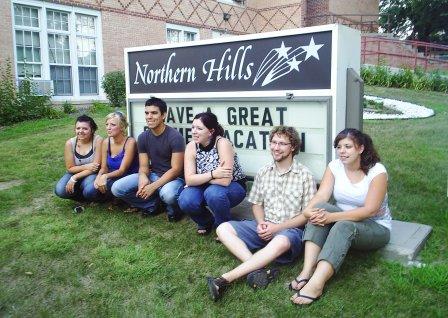 But it was a fun little jaunt there anyway, in spite of poor Guini's injury.

She, at least, got a lovely purple cast, which has been nicely autographed in silver metallic pen and Auntie Jovan picked out a matching stroller and doll, which Guini is now obsessed with and pushes everywhere she goes at all times.

We remember Norfolk from the chosen treasure of our hearts…Jeanie

NOTE TO SELF: Thank-You, Lord, for Your faithfulness, for the quick healing Guini is doing and for your mercies to our family throughout all the years. (The doctor's report is that she will get the cast off after only 4 weeks instead of 6 and it is doing well!)