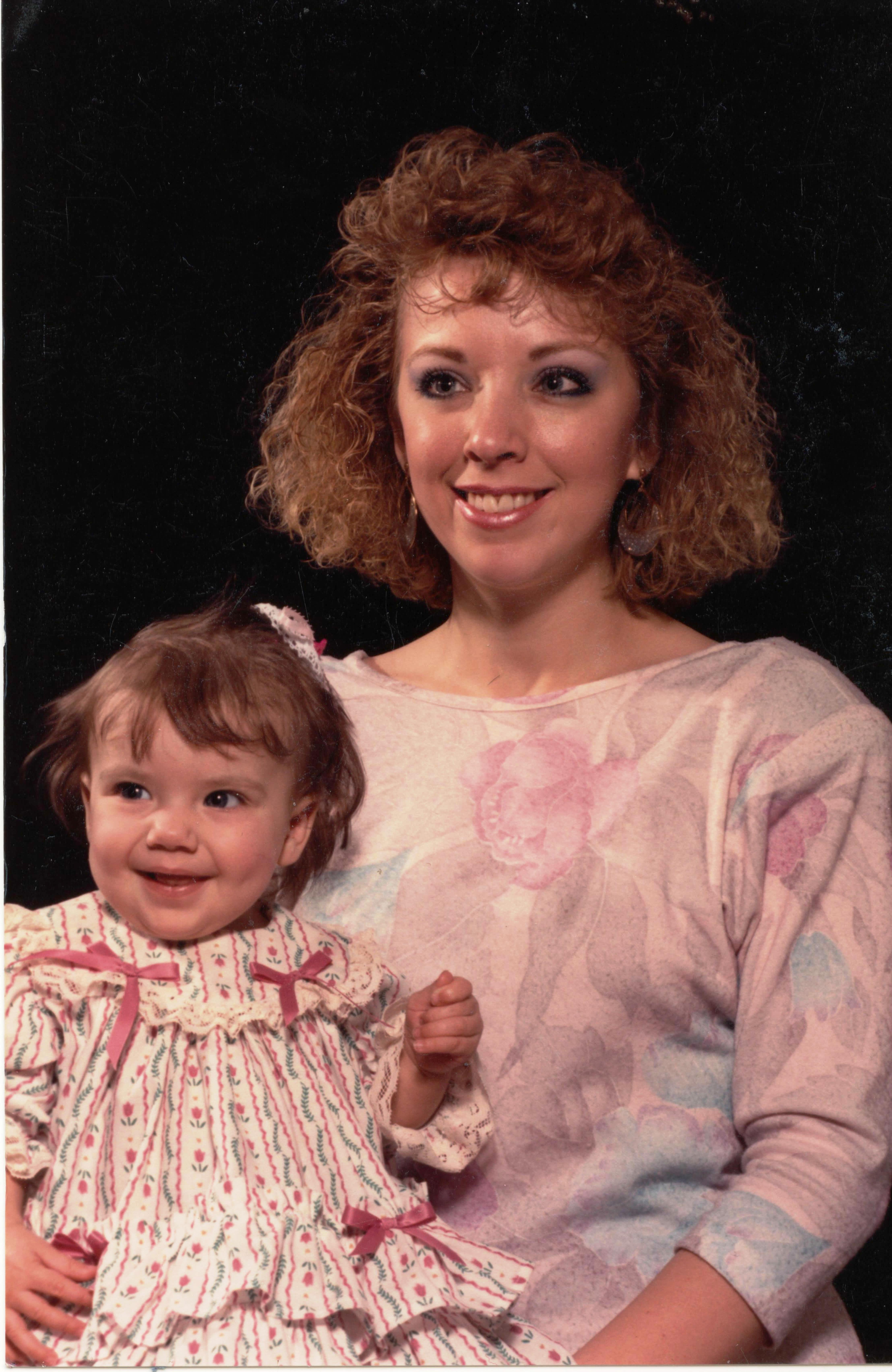 A couple of days after splashing in the pool with our first 4 kids during an unusually hot and sunny beginning to spring in Sioux City, Iowa, a freak ice storm hit the area and there were many travel warnings.  “Don’t go out in this unless you have to,” they said.

It was high-time for baby number 5, Stormie Dae Rhoades, to arrive and luckily, we lived just a block from the hospital, perhaps 3 if you count having to go around and enter at the emergency room exit (an area where just weeks later, Rocky, age 1 & 1/2 would “drive” our car into the side of the hospital wall when we had to make a quick trip back…that is another story entirely…).

Back then, you didn’t know the sex of the baby ahead of time.  It was all speculation, but a very strong heartbeat and her mammoth size pointed toward a strong, healthy girl.  She had been due on April 2.  Thirteen very long days later: volia!  And weighing in at 9 pounds, 10 ounces, we were certain we had not mixed up the dates.

Stormie was planned as a “gift” for her brother, Rocky (in a sort of “oh, we’re pregnant again” **surprise** way).  We’d had a girl…then another…then another…and one more try for that boy…we may have stopped having kids then if Rocky, the fourth child, hadn’t turned out to be a B O Y!  We felt we must try for a brother for him, or at least make him an older brother to a sister so he could learn to hold his own.  I would say to this very day, even as she is turning 21, she remains a great gift to Rocky (the only sister who took no crap off of him) and a great gift to us all.

How she got her name.  Naturally, you have already figured out that since she was born in a freak ice and snow storm, the name “Stormie” fits, but what you don’t know is that I had almost used the name “Stormie” with every single previous daughter.

When I was pregnant with Tara, I ran across some lyrics written by Stormie Omartian called, “Seasons of the Soul.”  I was so moved by them, Tara nearly had a different name.

By the time Steph came along a few years later, I had read a magazine article or two about Stormie Omartian and heard more of her music and Stephie was in line to get the name, but she ended up being premature and the name “Stormie” just seemed too overwhelming for our tiny, struggling-to-breathe baby girl.  When our third daughter came along “Stormie” was on the table again, but we decided to go with “Tredessa” (the name of a sweet little girl I babysat as a teen) because she looked so exotic.  “Stormie” didn’t seem right for Rocky, either, so it was still available when our last little one was born and there was no question by that time.

So, really – she was named for Stormie Omartian – an incredibly godly woman whose personal testimony and way of communicating through song has touched my life deeply over the years (not to mention her notoriety as one of the leading prayer authors/experts alive today).  My Stormie reads Stormie Omartian’s books and knows she is named for a woman who trusted God to turn her hurts into healing for others, an admirable life, worthy of emulation.

The servant.  Stormie is a servant-hearted girl and big giver. The whole family can rely on her and she keeps “adopting” needy children around the world to support.  I have seen her quietly give big gifts to families in crisis and watched her cry big tears for the broken.  Her heart is bigger than she is, held ever-so-gently by the compassionate hands of Christ, I have no doubt.

Stormie, I am so pleased with you.  You have been our little Stinky, mommy’s cuddler.  I have seen you play in a tutu (with your long, skinny toothpick legs) doing a roller-skating routine and watched you careen by with scraped knees chasing Rocky on rollerblades.  I got to watch the woman in you emerge when, as you wore your first bra and wore a dress and tights and black, patent-leather shoes in honor of the milestone, you told us, “It feels so nice to be a lady.”

When you saw a need on a worship team and were asked to learn, you spent countless hours alone learning to play the bass to bring glory to God, to be a blessing.  And just this past Sunday, on Easter, I watched you in the shadows once again, playing for His Name, His acclaim with your siblings and I loved you even more…again. I am waiting for you to go public with that beautiful voice, when the time is right and the song rises so strong within you that it cannot be silenced. I am so pleased with you, Stormie – who God has created you to be, and how you are dying to self to become that woman.

Happy birthday, Stormkins.  Your mommy loves you.  “As long as you’re living, my baby you’ll be…” Mom

NOTE TO SELF: Kiss my little Stormkins all over her face.  Give her many, many hugs.  Celebrate her life and thank God for the joy she has brought to me.

5 thoughts on “Stormie Dae “She’s the baby-gotta love her!””