Ode to Summer, for I simply will not acknowledge an autumn which does not truly begin until the  Autumnal Equinox, on the 22nd day of this month sometime in the late afternoon.  Yes, school is back in session.  Yes,  the nights are cooler, some mornings even crisp.  But I must sing of my love for the summer until the last verse fades softly, for it is hard to bear the end…

“Rest is not idleness, and to lie sometimes on the grass on a summer day listening to the murmur of water, or watching the clouds float across the sky, is hardly a waste of time.”  ~John Lubbock 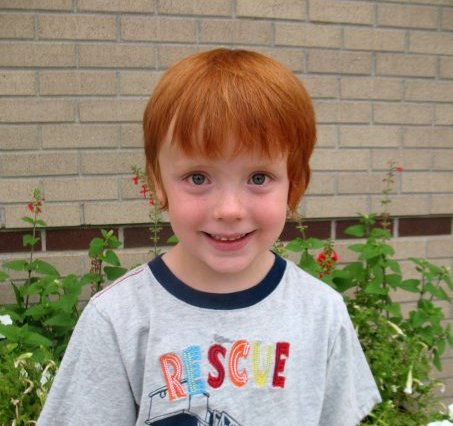 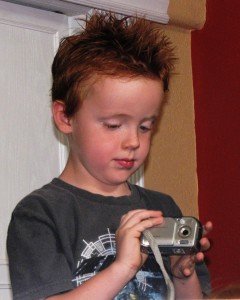 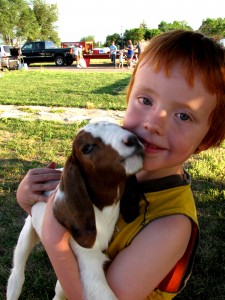 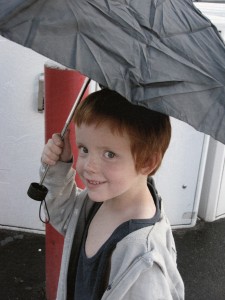 Gavin toyed with an Edward-do, a la Twilight (the movie), before settling on a mop-top later in the summer.  He is such a sweet, freckle-faced kid.  He turned me into Nonna 6 years ago this summer.  This summer we went to the nursery together and I helped him put together his very first, very own planters of flowers and tomatoes (a passion we share).  He changed my life forever. 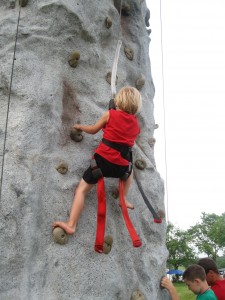 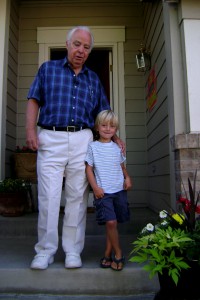 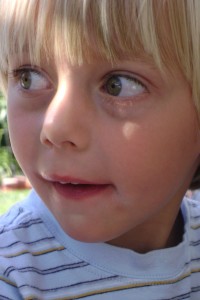 My little inquisitive, curious, talkative, adventurer, Hunter, will be 5 soon.  He questions everything, knows something about all topics and is growing like a weed.  This was the summer I had to make a lot of deals with him to get photographs.  If I take one of him, he gets to take one of me.  He is the perfect mix of both his mommy and his daddy and he always asks me, “Did you miss me while I was gone, Nonna?  Are you so glad to see me again?”  I so did and I so am. 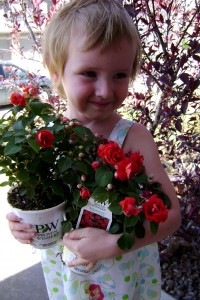 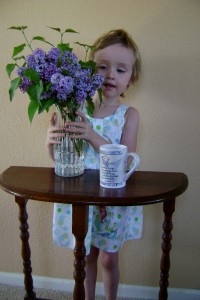 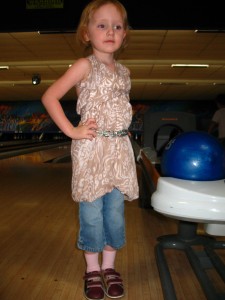 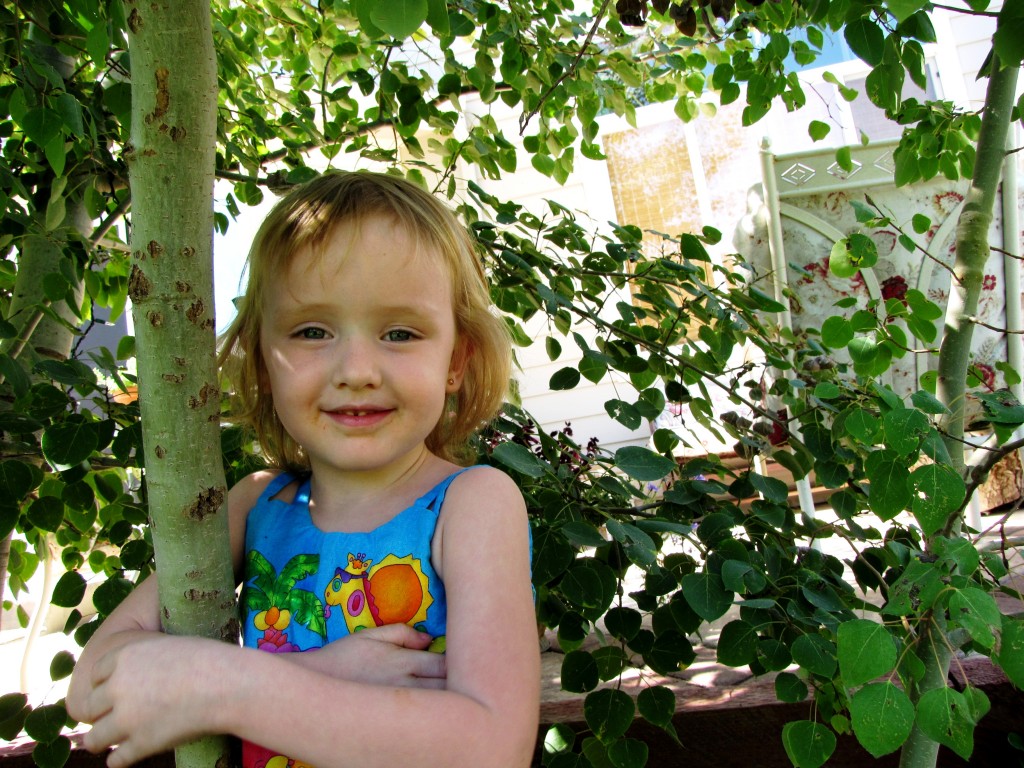 I call Guini my flower girl.  She loves beautiful blooms and picks them every chance she gets.  She likes to play “flower shop” when she comes to visit.  She is quiet, but decided, mysterious and cuddly – but you have to be ready to drop everything for the magic moment, for it can be fleeting.  We hang out, she’s my girl. 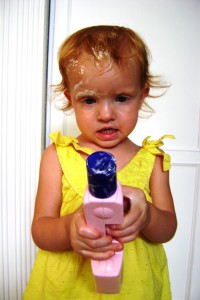 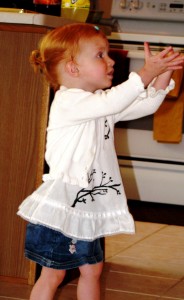 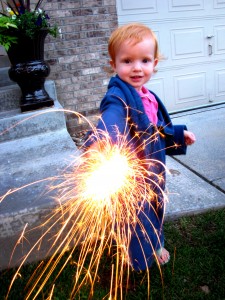 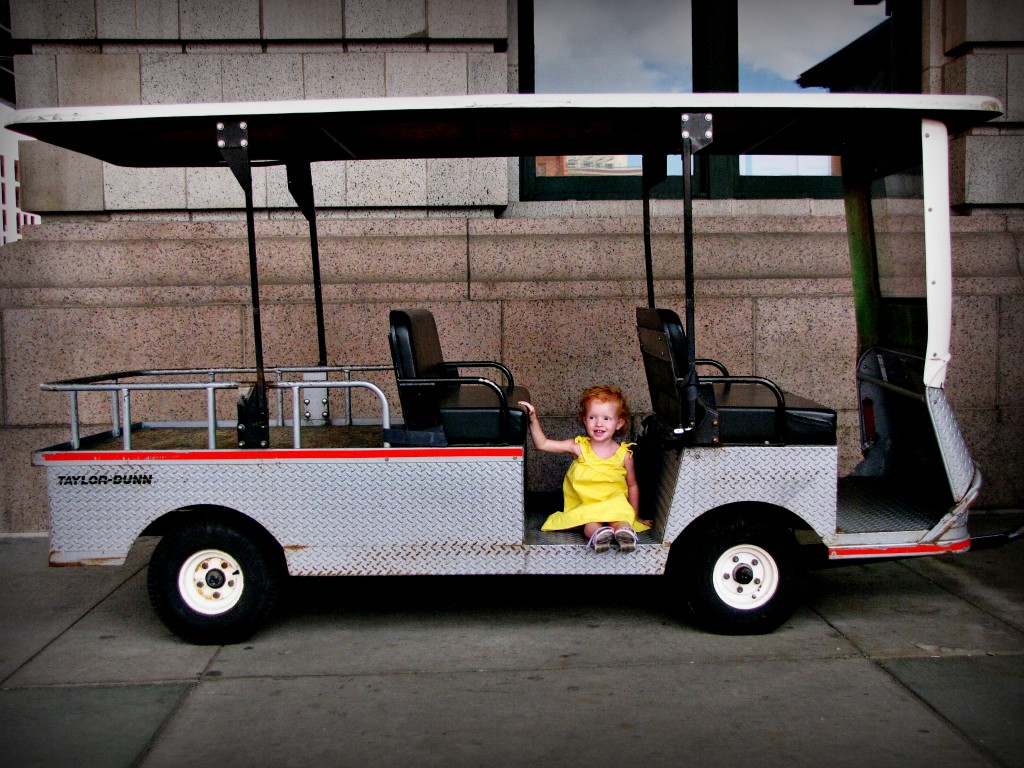 This was the summer of Gemma in the quinitessential yellow sundress.  It matches her vibrancy and her spirit.  I wanted one just like it!  She is hilarious and she is two.  She is very good at it.  But she is also very helpful.  She sunscreened herself before outings, or during “naptimes” or whenever she could – a lot!  She’s my little “sweet petite,” who cannot keep her jeans up since she started wearing big-girl undies! 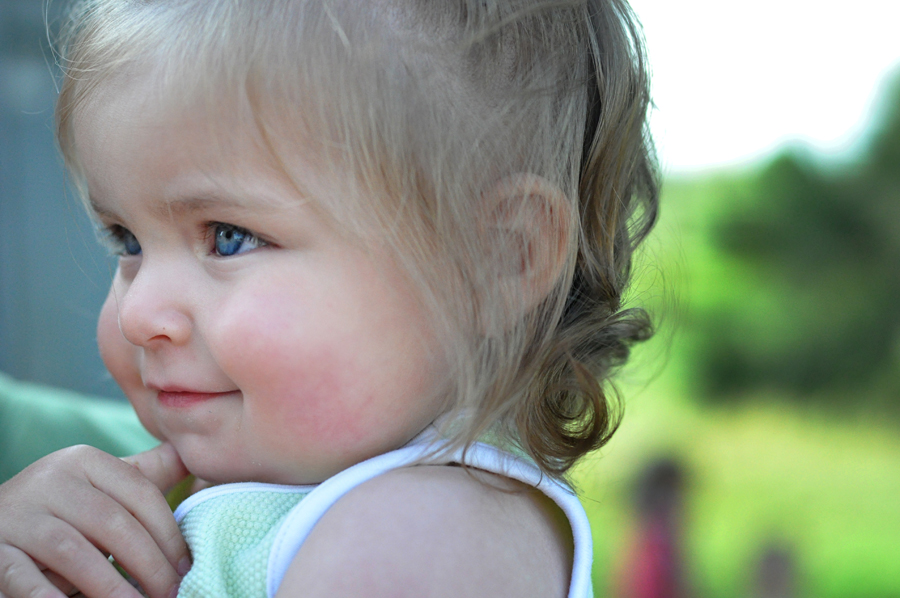 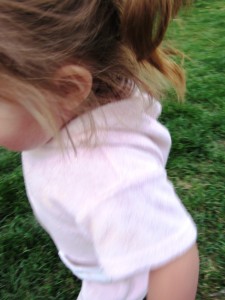 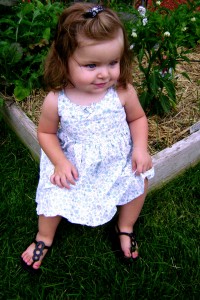 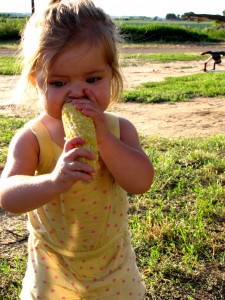 Averi-baby is on the run.  All. the. time.  Except when it is time to eat.  She and I share that hobby!  From certain angles, I feel like it’s the early 80’s and I’m chasing Tredessa again.  She loves to wear (and break) my reading glasses and when mommy and daddy go somewhere, she asks me, “Where’s mama?  Where’s Rocky?”  Every now and then while we are running around the backyard together, she will stop and tell me the most hilarious story and uproariously laugh at her own joke.  It cracks me up.

These are the 5 smile-bringers of my summer.  Of my life.  I don’t deserve them, and yet they are here.  And all they do is bring me joy. 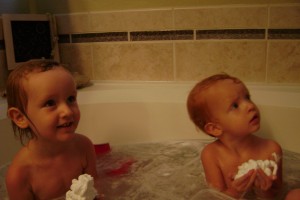 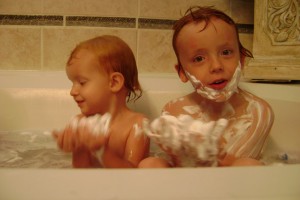 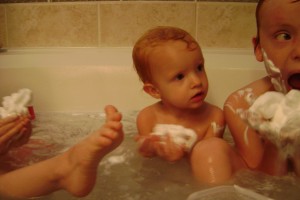 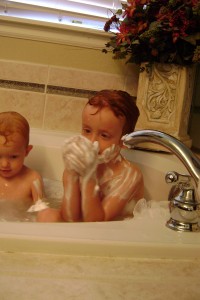 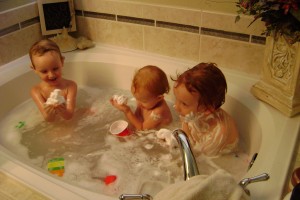 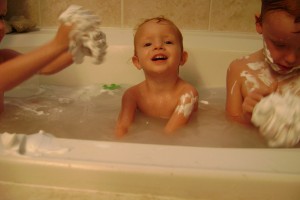 Twice a month, we get the Kelley kids on Sunday mornings.  This was getting ready for church last week.

“Grandchildren are God’s way of compensating us for growing old.”    –unknown

They do make life grand!

Guini jumps on my lap, wraps her arms tightly around my neck and with an almost-urgency says, “I need you, Nonna.”  I look to see if a boogey-man has been chasing her, but I see no one.  I ask, “What do you need?”  She tells me, “I just need you, Nonna.”  I am overcome with gratefulness that she does.  I hug her tightly back.  The moment vanishes and she off to play again.

Hunter tells his mommy, “I need to speak to you in regards to…”  He is four.  What does a four-year-old know about “regarding?”  Today he is busy cutting out paper crosses.  He says he wants to put them all over the ground at Heaven Fest so that people will be able to worship Jesus there.

Grandpa will be taking Gavin to school while his mommy is at the dentist.  “It’s almost time to go,” Grandpa tells the little red-head.  Gavin looks his grandpa up and down.  “I think you forgot to change your shorts…and that shirt,” he says, clearly concerned that his grandpa will not be meeting the fashion standard at the schoolyard.  Dave is wearing a orange t-shirt (which I ask him not to wear, but he believes to be quite comfortable on his work-at-home days) and some navy stretch shorts (which, though they are the closest things you can wear to pajamas in public, are nice).  I laugh my head off and wonder whatever Gavin will think of us by the time he reaches 1st grade next fall?!?

“O wow o wow o wow o wow,” Averi said to me the other day.  Despite the remaining fullness in her cheeks, both those seen and unseen, Averi is getting taller and thinning out, growing into her baby weight as she darts from room to room as quickly as her little legs will carry her.  Averi’s true passion in life is putting all her new teeth to work.  She loves food with great zeal and loudly mourns the end of every meal or snack time.  This, I am certain, she inherited from me.

What a saucy little redhead!  When she walks in a room, it is with great fanfare as she invites, “‘Ook at me!  ‘Ook at me!”  Then usually, and with great authority, she’ll spew some cursory commands at Sandy-the-Dog, who wishes for nothing more than to slink from Gemma’s sight before her tail is yanked on unmercifully or Gemma hops aboard for a ride.  Gemma’s life is spent in pursuit of any reason whatsoever to laugh.  She never fails to respond to my affectionate “I-love-you” with a very bright response in her quivering little lamb voice: “I wuv you!”

Who knew it could bring this much?…Jeanie-the-Nonna

NOTE TO SELF:  I am being fully compensated. 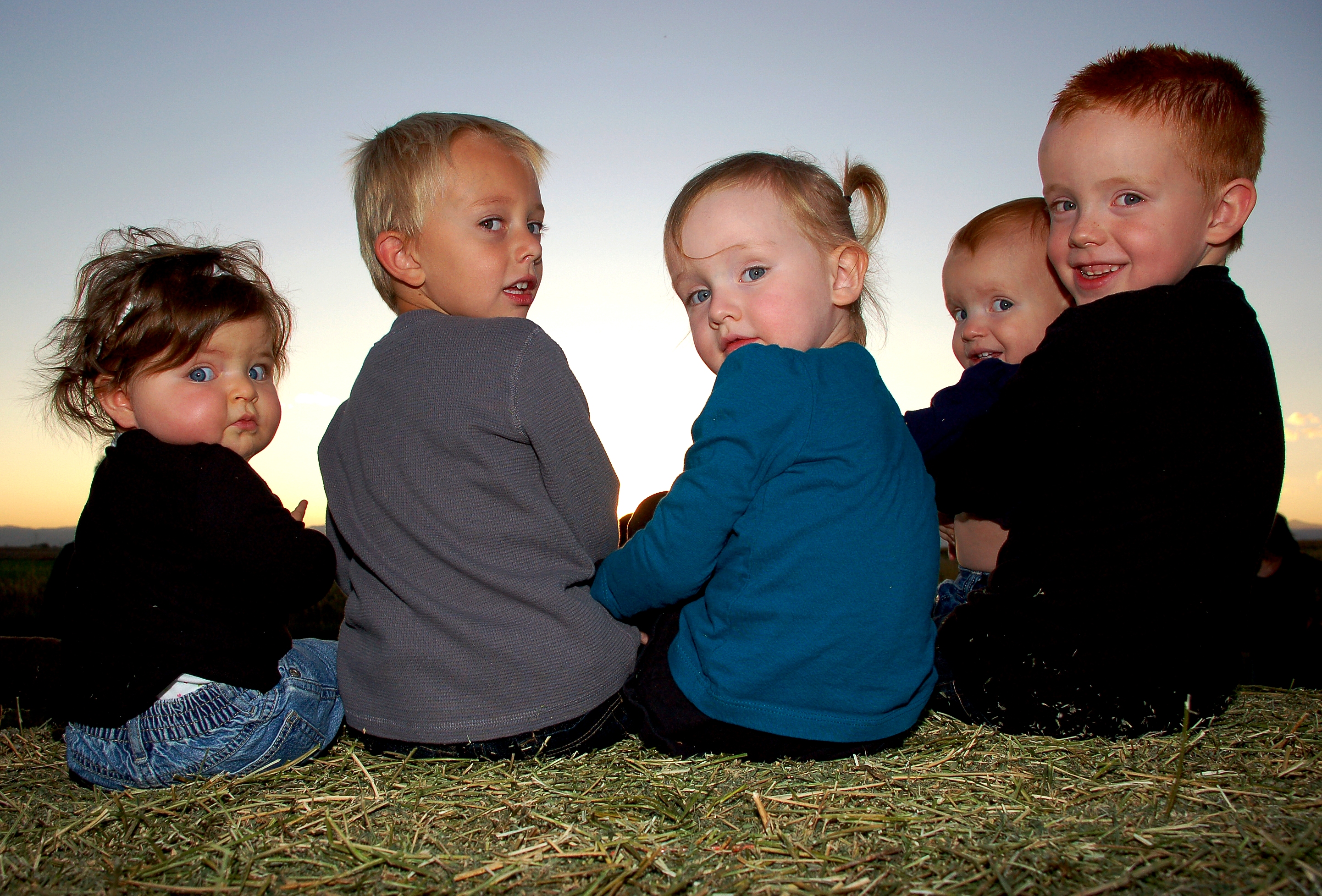 O God, thank-You for these, my amazing five!  They’re the reason I was born!  They are my heritage-the gift You have given me.  The eternal things I place in them are the legacy I will leave.

I pray Your Word will always be in their mouths.  I pray that Gavin and Guini, Hunter and Gemma and Averi will grow up hiding Your Word in their hearts and will choose, even now, to serve You and You alone.  I pray these five, my little amazings, will seek You for wisdom and will receive knowledge and understanding from Your heart for their lives.  May their worship rise to You.  May their song reach Your ears and bring You joy.

I am so honored God has brought me this incredibly noisy, full and increasing heritage.  He is making all my dreams come true…Gavin, Guinivere, Hunter, Gemma and Averi’s “Nonna”

NOTE TO SELF:  I have earned the gray hair and grandma wrinkles-even if I don’t yet wish to avail myself of them.

“Enjoy the good life…everyday of your life.  And enjoy your grandchildren…”  Psalm 128.6 The Message 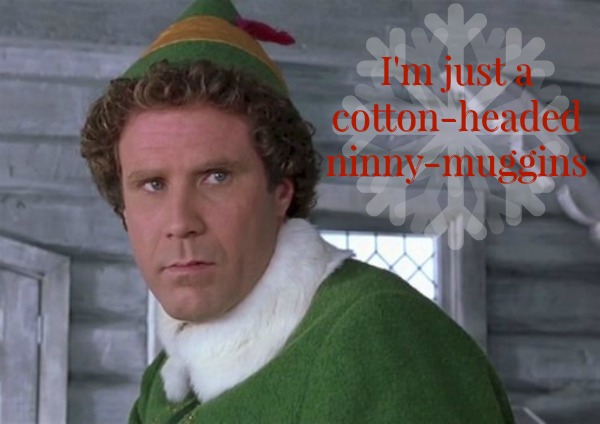 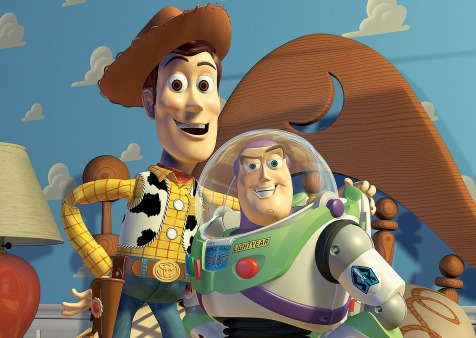