He is sweet and cute, I love country and he can sing (he probably doesn’t even recognize the scope of his magnetisn yet, at 17).  Plus he is a Jesus-follower and represents well.  But, ya know, we already have a Josh Turner.  What is Scotty going to do when he has to give Josh’s song back? 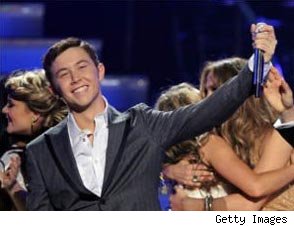 I didn’t even watch the final 2 weeks of American Idol.  Just read Yahoo-news and it was enough.

Haley was strong, just waiting to be unleashed all the way.  That girl has style and a voice! She packed a multi-faceted musical punch.  James was hard-core and really, even though that is not even my thing, absolutely belonged in the final three.  Casey is the voice (and fascintaing musician) of a modern-retro, way cool-cat generation.  They should have have been the top three.  I mean, technically Haley was in the top three, but if she still left at the same time, at least it would have been better to have left against James and Casey.

I have never bought a lottery ticket and I did not vote one time this year ( I have only ever voted one year: Blake Lewis), though it actually was probably my favorite year ever just because of the varied styles and extreme talent represented.  I missed Simon and I like Jennifer and Steven.  But the end?  Questionable.  I doubt Scotty could have, would have won with Simon in the judge’s seat.

Congratulations, though, Scotty.  You seem like a good kid with a bright future.  Only God knows what He has in mind for you (and He is all good)…see the WIN here