One son, urged to marry carefully ~ he got the sweetest one ever!

A black-sky, vicious storm-brewing day was overtaken by the burst of bright-light sun-shining, as you spoke your vows in that window-walled cafe.  The light (and the love) were nearly blinding! 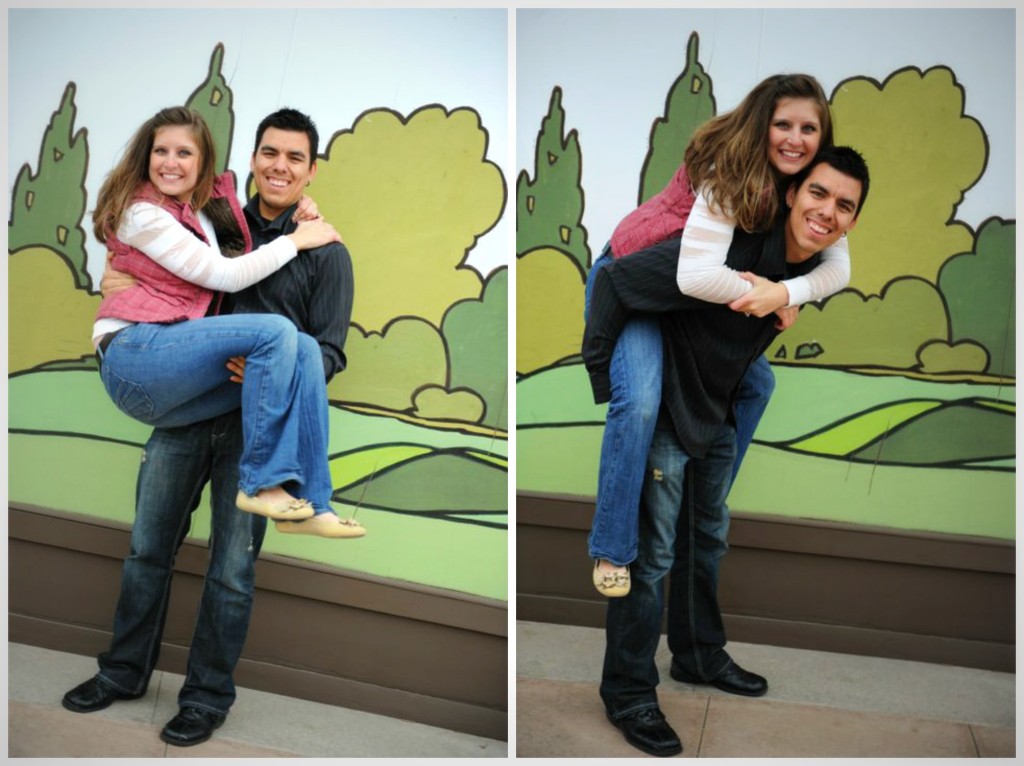 Moats and boats and waterfalls,

I been everywhere with you (that’s true) 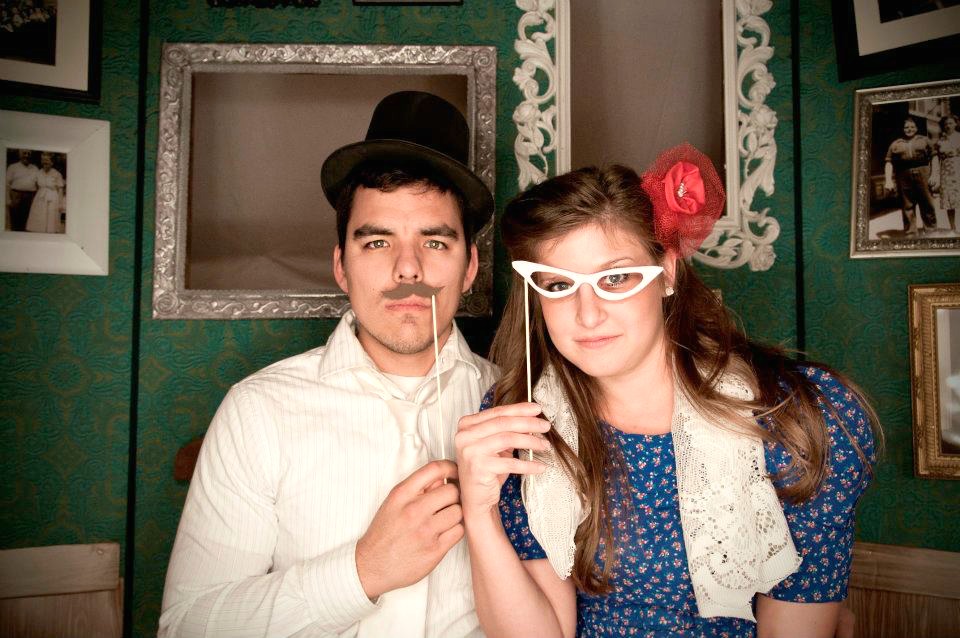 And here we are.  Oh goodness, the years have been blessed.  Of all the girls who ever tried to turn my little boy’s head, you were the best choice for him, Jovanie.  Congratulations, to you both on such a great decision then and now.

I am so sorry for the week you have had, for the loss you have experienced – not so much about the “things,” the washer and dryer and hot water heater and furnace and carpet.  Not even about the physical “things” that included Rocky’s studio and all his guitars and sound systems and computers and recording equipment.  Even that, we know – the guitars represent so many precious times in the Presence, the memory of songs sung to the heavens, we feel that loss.  We know The LORD will provide and He is your Provider! But it is what those material possessions have represented – a really good life.

You’re safe, your family is good.  But it’s hard.  Scary to awake in the night to see the waters rising from the lower level and have to be “rescued” in the dark, by flashlight grabbing everything 3 little girls will need until…who knows when?

I love that you have chosen the song for this day of celebration to be, “Home is Wherever I’m with You,” Jovan.  Because that is the secret you know.

Laugh until we think we’ll die,

Barefoot on a summer night

Never could be sweeter than with you

So while you’re displaced, not even knowing how long until you can return to “the house,” I am so glad you have found refuge in each other, not just for these days but for life and that even today, in such an unsettled moment – you are home. 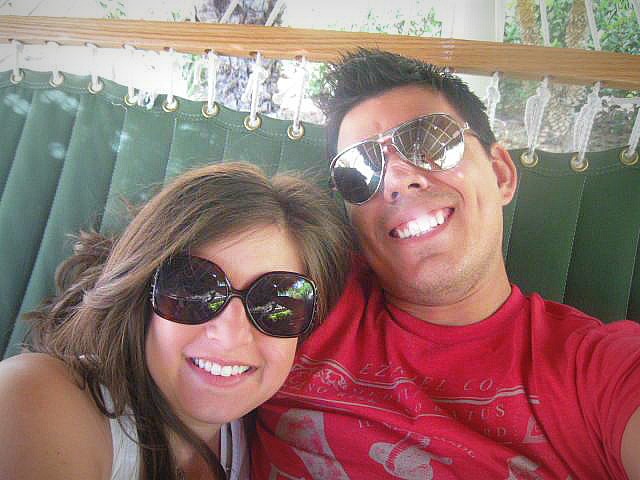 Home is wherever I’m with you

Edward Sharpe and the Magnetic Zeros, Home {see it here}

Goody!!  Jovan says we get to nominate names for baby-to-be (due in March).  We each get to submit one girl’s name and one boy’s name as a back-up.

Even though Rocky & Jovan have already nixed it, my boy-name nomination remains: David Allen Rhoades III.  When we named Rocky after Dave (not “junior,” but “David Allen Rhoades II”), we did it with an eye toward the future.  Dave (the first) didn’t actually want to name a son after himself, but he was adopted and it just seemed, after Rocky was born, that it would be a nice way to leave legacy, a way for Dave to pass on something of himself into the future since he didn’t have a lot of past to give.  And we did it with the thought that there would someday be a David Allen Rhoades III – never even considering that it wouldn’t be our choice to make!  Haha!

We learned quickly, in 1984 (after only 10 or 11 days, I think),  that having a second David in the house was going to be confusing, so new-baby-son became “Rocky” and has been known that way since. (Rocky after our favorite movie boxer, not the cereal, ice cream or TV show)

Rocky and Jovan won’t use my boy name nomination, but I submit it humbly, nonetheless.  Not only is there the family-heritage piece, but there is David in the Bible and he was awesome!!  So I will even suggest these possible nicknames for possible-baby-boy-Rhoades to be known by, since the family already has its’ share of Daves and Davids.  He could be known as “Dusty” (an old family name), or even “Roman Rhoades.”  “Country” would be interesting, or  how about “Scholar?”   All viable choices, I think.

Now, on the girl front, I have several I’d like to submit, but I am only allowed one.  ONE!  So I need help with which one!  Which should I do from these three?

Jericho, “Coco” for short.  IF I had had one more child back in the 80’s, which statistically speaking would almost certainly have been a girl (right?), I’d have named her Jericho.  That’s right: Jericho Rhoades.  I decided I’d done enough to populate the earth with Godly seed, though, so I dropped out of baby-making and left that perfectly wonderful name choice just sitting there – for some one else to use.

As for a middle name on this?  It could be anything, really.  Maybe “Belle” because that was my Grandma’s middle name and my dad always says if he had it to do over, he’d have named me “Jeanie Belle.”  Then, if we called Jericho “Coco,” she’d be “Coco Belle,” which sounds a little like “Coco Chanel,” the famous French fashion designer who so impacted the last century.

But then would little ornery boys on the playground be “Cukoo for Coco Puffs?”  Hmmm…probably….but is that necessarily a bad thing?

So, that is it.  My first possible nomination in the girl’s category is Jericho Belle.  Or just Jericho, leaving the middle name to her parents, TBD, because I am thoughtful like that.

Maisy Grace (Maisy like Daisy, or it could be spelled “Maizy).  I think it is a fairly obvious reference to the song, “Amazing Grace,” and you cannot go wrong pinning a name like “Grace” on a little girl.  Look what it did for Grace Kelly.  I believe I even wanted Tristan and Stephanie to name Gemma “Gracie,” because their last name IS Kelley!  Come on!

I have already told Jovan I am liking this name for a granddaughter of mine.  So whaddya think?  Maisy Grace Rhoades?

Now Bryan will tell you he came up with this first – way back before Averi was born.  And judging by blogs written, he is right.  He did.  I thought it just came to me like a heavenly vision one day.  I was thinking of cute names that began with “A” because Jovan wanted “A” names and suddenly there it was:  like Abby Road, THE faahaaa-mous record by the Beatles, based on a the faahaaa-mous Abby Road pedestrian crossing in London, England (which you can watch live on the internet).  I mean, how cute is that?

Which one shall I submit?!? 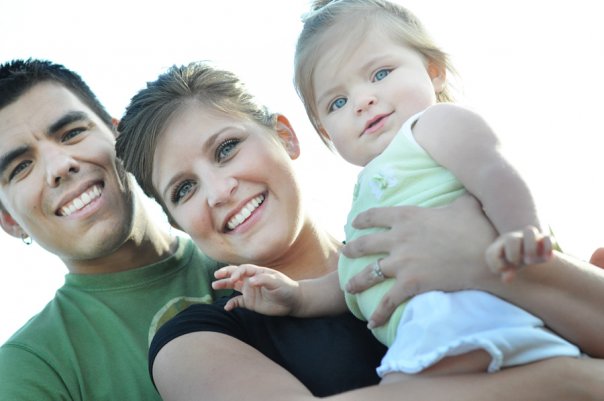 It was crisp black lines and soft, silk blue and monograms and crystally-light drapes.  It was bubbles and blue Mustangs and tuxedos and loveliness.  Barefoot flowergirls, curled hair cascading down their backs and ring-bearers raced to the finish line.  The black, menacing sky broke forth into a yellow blaze of western-sun glory just as the bride, on her father’s arm, entered to be seen by her groom.  There was a 5-tier cake, each a unique and specially-chosen flavor with gourmet fillings, embellished with the palest blue and thousands of edible pearls.  There was candlelight.  Friends and family filled every space, the dancing was exhuberant and chocolate fountains flowed.

My favorite part of Rocky and Jovan’s wedding day?  The vows they wrote to each other, so sweet and loving and true. A close second would be that Jovan and I tested at least 17 buttercream recipes and hit upon the perfect one.   My favorite part since?  Their commitment to passing on family traditions and their gift of time, the time they give us on holidays and holy days, the special events and times that make family and keep the legacy going. 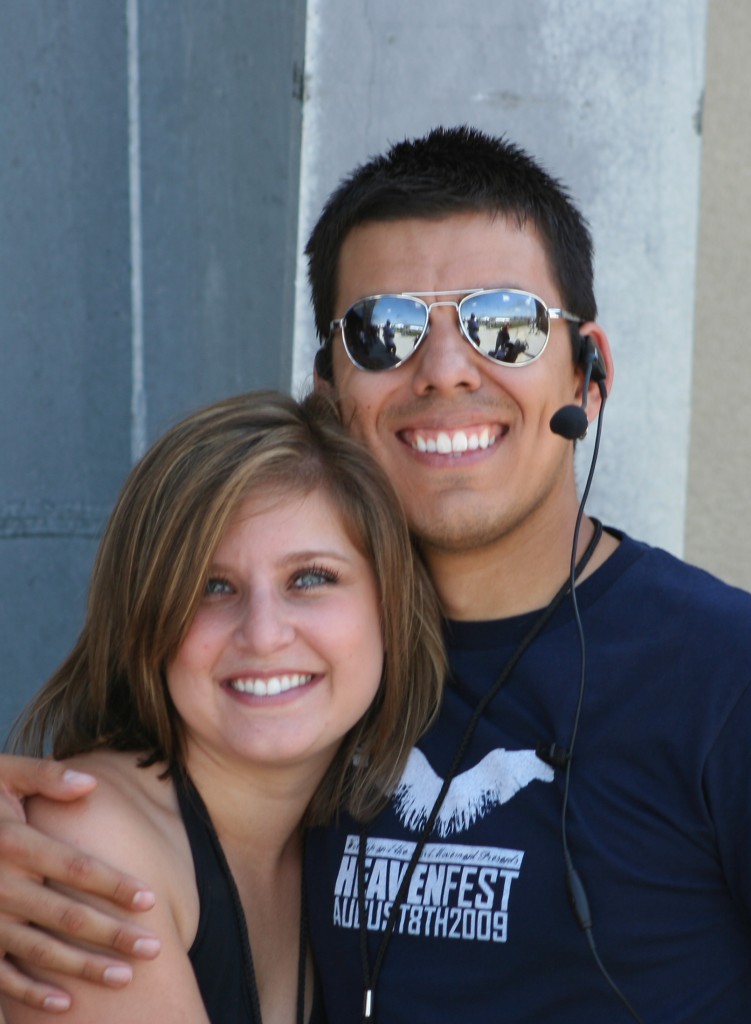 Rocky and Jovan got married three years ago on September 15, 2006.  Congratulations and Happy Anniversary you two beautiful people.  Life has changed since then.  Rocky + Jovan brought us Averi-baby and will bring me another grandbebe in the spring!  This is a thrilling and good thing.

Love you so much, my son and his love…mom

pictured: Rocky and Jovan with Averi, taken by Ellie Pickett; The “Rock-vans” at Heaven Fest, taken by Kori Verspohl

Last week was one of those weird, rough weeks for our family.

Our beautiful new daughter-by-marriage, Jovan, learned her grandma passed away rather suddenly on Monday.  It was Jovan’s first day at her new job and she was going through orientation when she found out, so she had to press on and subdue her thoughts and emotions.  It made it hard.  “Grandma DiPerna” was in her 80’s.  Her life was long and she has left a growing family of loving, incredible children, grandchildren, and great-grandchildren.  Though her star has burned out and the night sky will never seem the same, her legacy remains.

The same day, Dave’s nephew, Troy, was murdered in Las Vegas.  Who can explain or find justification for the violent death of a 41-year-young man?  A small-town fireman is in jail for first-degree murder.  Lives are turned upside down.  It cannot be undone.

On Friday, our little Stormiekins was in a car accident.  She is sore, bruised, but intact. And as a mom, you cry in gratefulness and as a release because of how much worse it could have been. And when you weigh everything, the cost of repairs and restoration and insurance and physical pain and all the rest – it is not too much for my little girl to be OK. 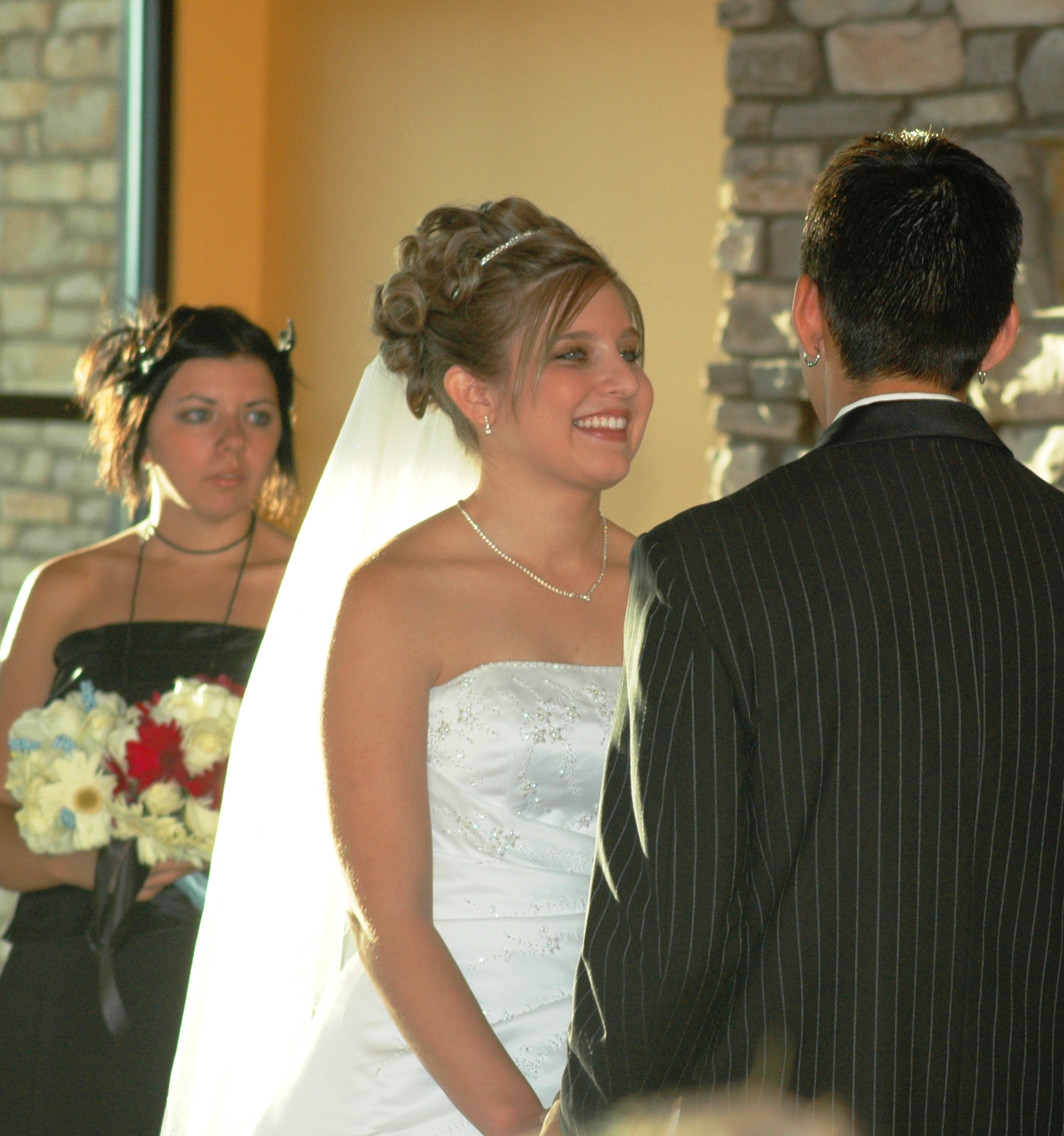 Here is Stormie looking on as Rocky and Jovan exchanged vows a few months ago.  I am so glad you are OK, Stormkins.  I am thanking God for it!

Blessed so far beyond what I deserve, Jeanie

NOTE TO SELF:  There is no promise of tomorrow for any of us.  Live and love and be thankful at the highest level possible while it is still today.