Three nights before Christmas and all over town, there is much to be done and so many sounds…

1.  Christmas with my family is pretty loud.

“Christmas at our house was like a Donny and Marie TV Special” (who said that?).

That cracks me up because it is like that for us, too.  Rare is the quiet tree-lit silent night, or a room full of heavenly peace for pondering and reflecting.  Even now, as I write this (on Monday night to be posted on Tuesday), it is late.    And yet, the rooms are brightly shining and daughters have materials and supplies spread everywhere, working on Christmas projects and finishing last-minute gifts.  They tease and cajole.  They drink coffee and break out into song, filling the air with movie quotes and remembrances in a thoroughly unpredictable rhythm.  Just now they are singing selections from the musical “Oklahoma,” for what reason, I do not know.  I’d like to tell them to go to their rooms and get to sleep, but am reminded they are here now by choice, a gift to me, something I treasure.  Let the madness remain. 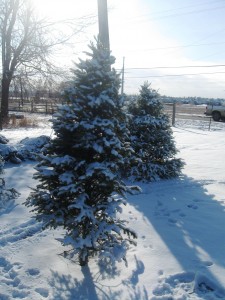 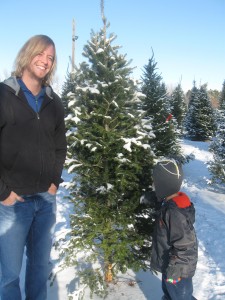 I power-shopped for more than 10 hours Monday.  {sigh} I organized each person’s list according to every different retail establishment I would need to hit.  I mapped out a plan, gathered coupons and those “free money” cards I have collected from said establishments (like $10 off a $25 purchase at JCP, $10 off any purchase at Kohls!) into a folder.  I made sure to have my Starbucks giftcards for needed strength (did you know there is a company-wide shortage of caramel due to the popularity of the new Caramel Brulee Latte??!?) and most importantly, dedicated myself to having a good hair day because when you are going from morning to night, not having to worry about hair in imperative.  Then I told Dave: this isn’t a pleasure trip, you know.  The objective is to cross things off my list: quickly.

Several of my girls have asked for vintage/antique-type things so I added 3 thrift stores to my list, all within a short get-it-done radius.  When we arrived at the first one and I leapt from the car with notebook and pen in hand and started bounding toward the door at break-neck speed, Dave commented, “There.  See, honey?  This store was created just for you.”  For the big sign at the entrance read:  ARC Thrift Store ~ Shopping with a Purpose.

Yes, I am a purpose-driven shopper. 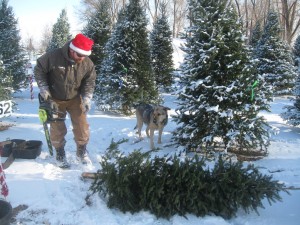 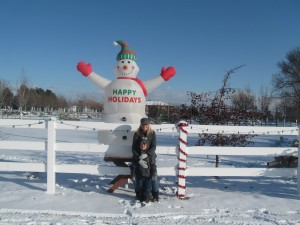 3.  I will continue to complain about the weather.

It was too stinking hot.  It didn’t feel  like Christmas with the weather in the 50’s, which is seriously impeding my glorious songs of old.  But today, the temp has dropped!  Here is what I want:  Maybe the low 40’s with some big pretty snowflakes falling, but not on the streets-just along the sides so everything looks pretty and children can build men…and women.  And just cool enough so you can wear the cute hat and adorable scarf set some one has given you (along with the coordinating fingerless gloves), but you don’t really need bulky coats.  You know-cool enough that you’d look all New-England-wintry and Christmas-card-ish if you made a quick stop and took a few spins around the ice-skating rink while you were bustling about shopping, but not so cold no one can recognize you due to the outerwear overkill when, if you should fall, you would not, in fact, be able to get back up.  Is this really too much to ask for??? 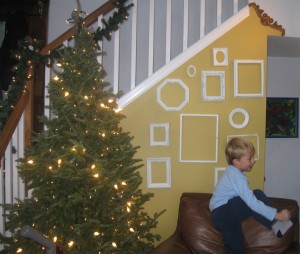 Three movies that are not usually considered Christmas movies, but have great Christmas scenes in them:

[1] Funny Farm with Chevy Chase. [2]  About a Boy with Hugh Grant and [3] While You Were Sleeping with Sandra Bullock (omygosh, I LOVE this movie!). 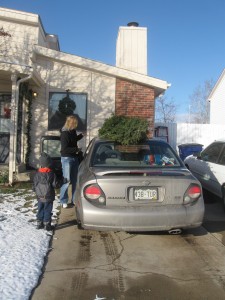 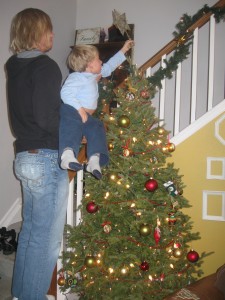 Three nights before Christmas, 3 French Hens, Three Wise Men, and three wishes from me to you:  peace, joy and love!

pictured: DP, Tara and Hunter’s tree farm adventure a couple of weeks ago.

Me and my girls Saturday.  Me, Jovan, Tredessa, Stefane (back row), Tara (in front), Stormie, Stephanie, Elise-the-Niece, and Katie from the Springs

Cherry Creek for Anthropologie, Urban Outfitters, Sur La Table, and Restoration Hardware.  Stormie got her vintage-inspired bowls – lots.  Alright, already with the bowls! :)  The girl is a bowl nut!

South Broadway for Decade (inspiring, old/vintage and new-I got the best alphabet flash cards I have ever seen there!), and True Love Shoes (great accessories) where the 9 of us just sort of filled every square inch of space.  Delicious spinach pizza-by-the-slice at the world-famous Famous Pizza.  Elise was heard to exclaim, based on the fact that her teeth remained leafy-green free, “We are so good at eating spinach!”  She is gleeful by nature!

We braced ourselves and went into a house in Denver where the “Thriftonista”  was liquidating her vintage clothing.  We arrived there with the Channel 4 newswoman who taped a segment for the 5 o’clock news about ways people are saving money.  That place was packed, due to a notice via e-blast to the  Denver fashion-scene types, which includes 2nd daughter, Stephanie.  Wall-to-wall people were madly digging through clothes whose year’s I could name between 1964-1989.  Some of it was questionable as far as fashion the first time around.  Nonetheless, it was a fun run around the memory block for me and Tara’s arms can be seen earnestly flipping through the rack of tightly packed, hung clothing on the news segment.  During the interview with the Thriftonista herself, I am visible with my back to the camera as I just mainly try to avoid being stampeded by all the 20-somethings intent on buying my mother’s 1970s wardrobe.  We were on TV!

On East Colfax we soaked up Fabric Lab ambience (I really was NOT cool enough to be in there) and then splurged for a couple of coffees, a couple of waters and 12 cupcakes at The Shoppe which set us back more than lunch had.  Yikes!  Well, you only go around once and we can now say we have had very, very amazingly delicious cupcakes at the trendy hole-in-the-wall cupcake store for 40-some-bucks, nevermind that I could have achieved the same for about $4.  That is not an insult to them, nor their not-entirely catchy slogan which is something like: Don’t be a hater, eat a cupcake (?) – it is just that I can make really good cake, when I want to.  I am sure if the people at Westword and The Denver Post and all those other places that have given them “Best of” awards had one of mine, well, you know…

Tallulah Jones was defnitely a favorite.  We like stores that are full of ideas as well as merch.  Mod Living wasn’t the thrill wed hoped and Urban Living’s best part was the cool dog that met us at the door.

Two cars, nine women, all of Denver’s best in one day.  Sore legs.  Thinking ahead to our next outing…maybe a movie in our jammies?  Whew!  I am so older than the rest!

LOVE these girls!  So blessed!…Jeanie

NOTE TO SELF:  Oh, I know-next time I take the girls to MY favorite: Djuna!