In 3 months (the less-than-90 days between March 23 and June 19), we’ve had Dave-the-husband’s birthday, Amelie’s first birthday, Stormie’s quarter-of-a-century birthday (plus moving her into her first house-she is a homeowner!!), Tara’s super-early-30sbirthday and Mother’s Day.  We had Stephanie’s birthday, Gemma’s birthday followed closely by Gavin’s lava’d birthday, Guini and Hunter’s Kindergarten graduations, Wrex’s birthday, Tredessa (28) and DP’s  (30th) birthdays and Father’s Day.  There have been 2 major Heaven Fest dinners and a couple of big-HF-family-meetings with all the trimmings and even Luka had a bday 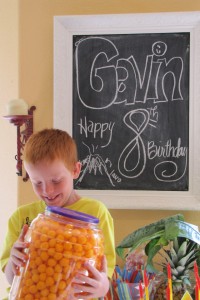 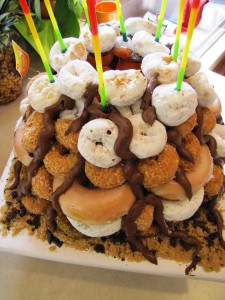 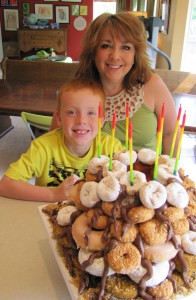 The first grandson turned 8 and we all gathered for a happy-Saturday-morning breakfast-party.  I used strawberry Jello for the “lava,” but even though in the trial run the actual liquid didn’t ooze out, but rather just red Jello-bubbles travelled slowly over the sides, no one wanted me to put more Jello in, afraid the donuts would be drenched in it, ruined for consumption. PLUS my dry ice melted down to 2 tiny slivers overnight.  Guess I need a lesson in dry ice!!?  Gav and I will have to try it again sometimes when there is no Jello-sogginess-concern.  With LOTS of dry ice.  A red explosion!! 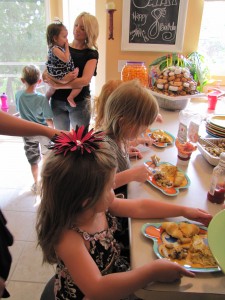 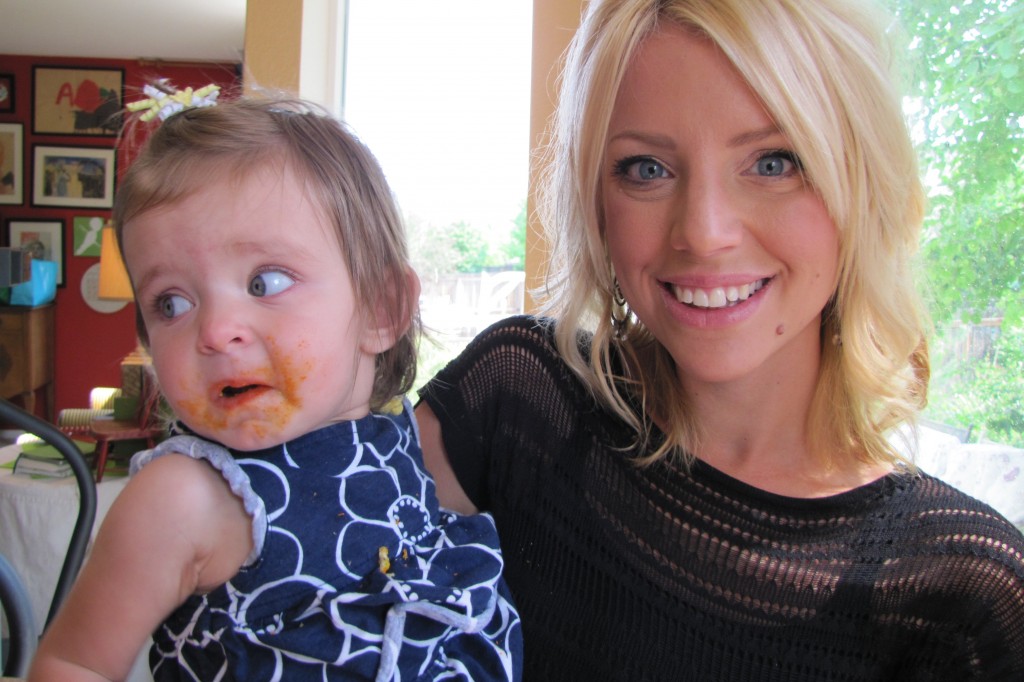 Gavin’s dinosaur cake when he turned 4, I think, was sort of the beginning of my “cake adventures.”  He keeps making life fun.  Love that boy! 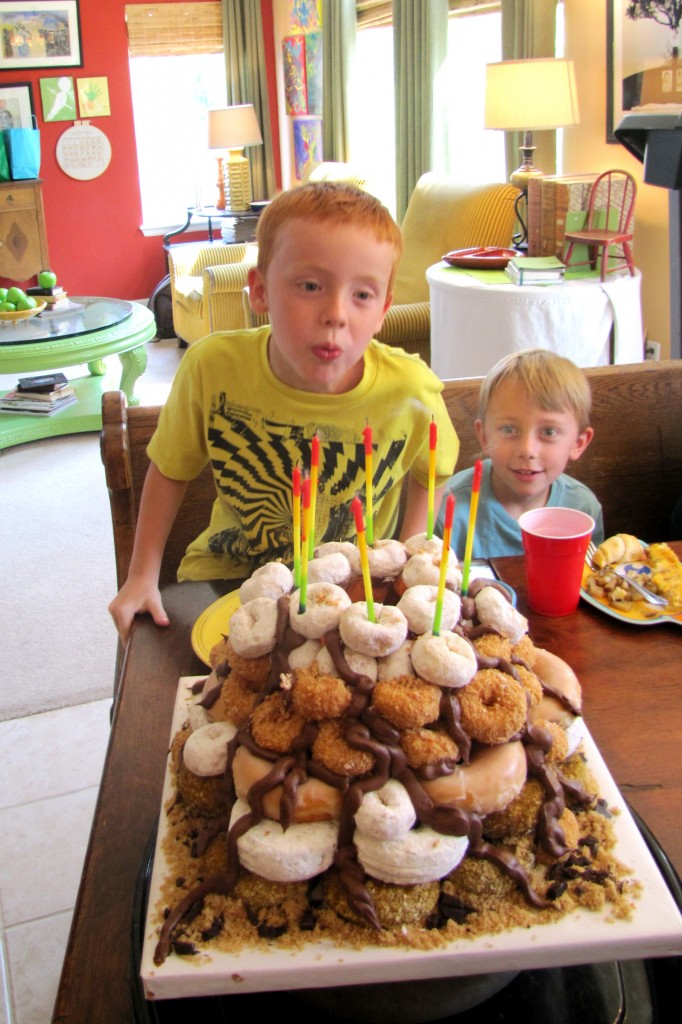 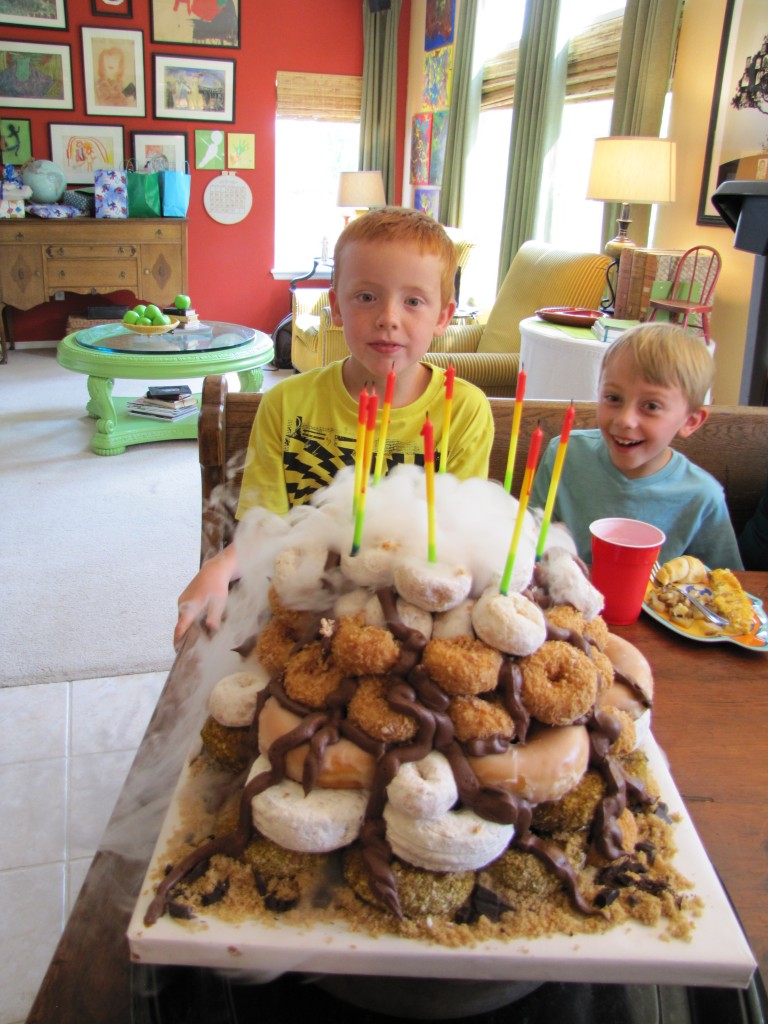 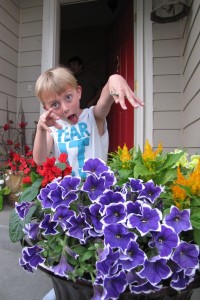 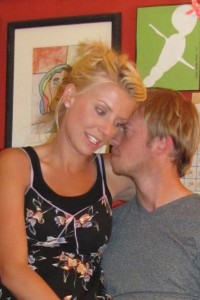 Wrote about his birthday:: H E R E. We did a double-celebration for him and Tredessa with a big Rhoades-family-Mexican meal.  Cilantro rice and carne-asada steak tacos plus pulled pork green chile tacos and all the things that go with those.  Dave wanted strawberry shortcake for his birthday.  Tredessa had Lazy Peach Dessert (see below) for hers.  Naturally Wrex performed a song for Dave and noted all his “famous” phraseologies (i.e. o-my-hinkin’-harry, bro-ham-and-cheese, etc) and even mentioned his penchant for v-neck tees.  Stef is a master lyricist!  Dave got the blessings and encouragements from the fam and Tara played him a most appropriate Brad Paisley song, “It Did.”  [see here] 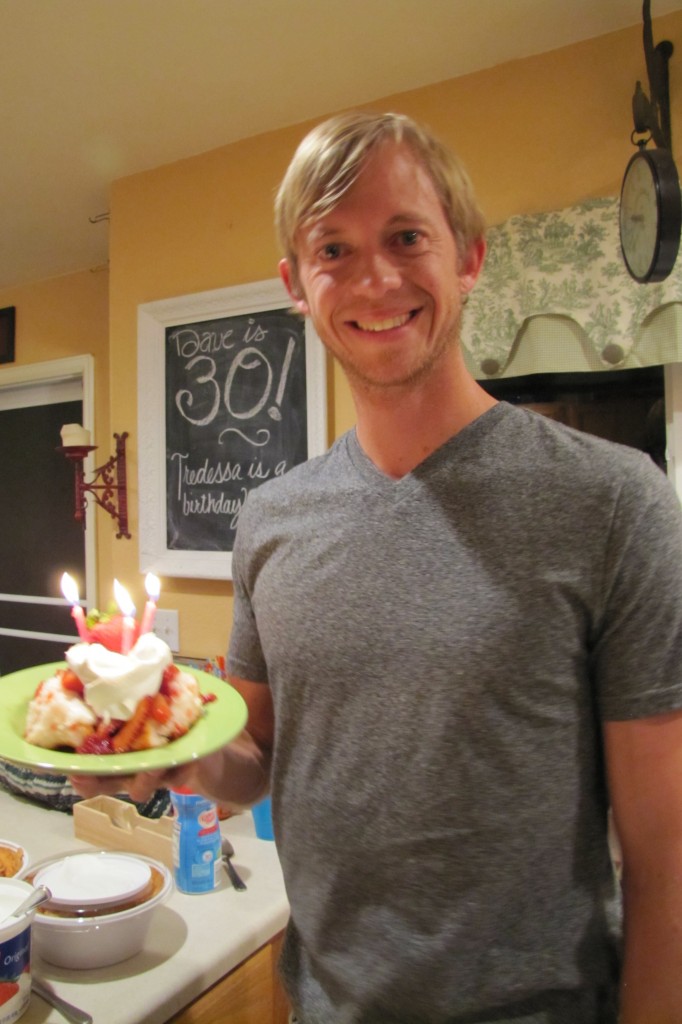 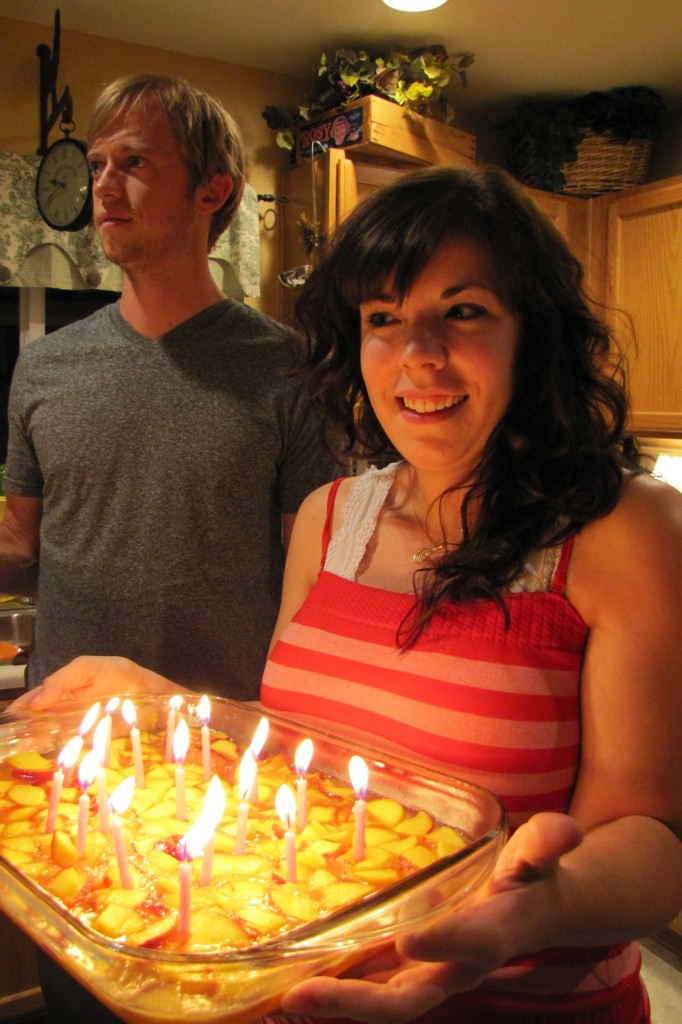 Tredessa was serenaded by her lover-boy for her birthday

And she had a lovely birthday with him.  I wrote her b-day blog:: H E R E.  Then the double-celebration with DP.  She got a song from Wrex and it was a little on the ornery side, which Wrex believes brothers should do.  It was hilarious.  It fit right into the tune of “Take Me Home, Country Rhoades,” if you can imagine.  She is an amazing woman and in love, which we like. 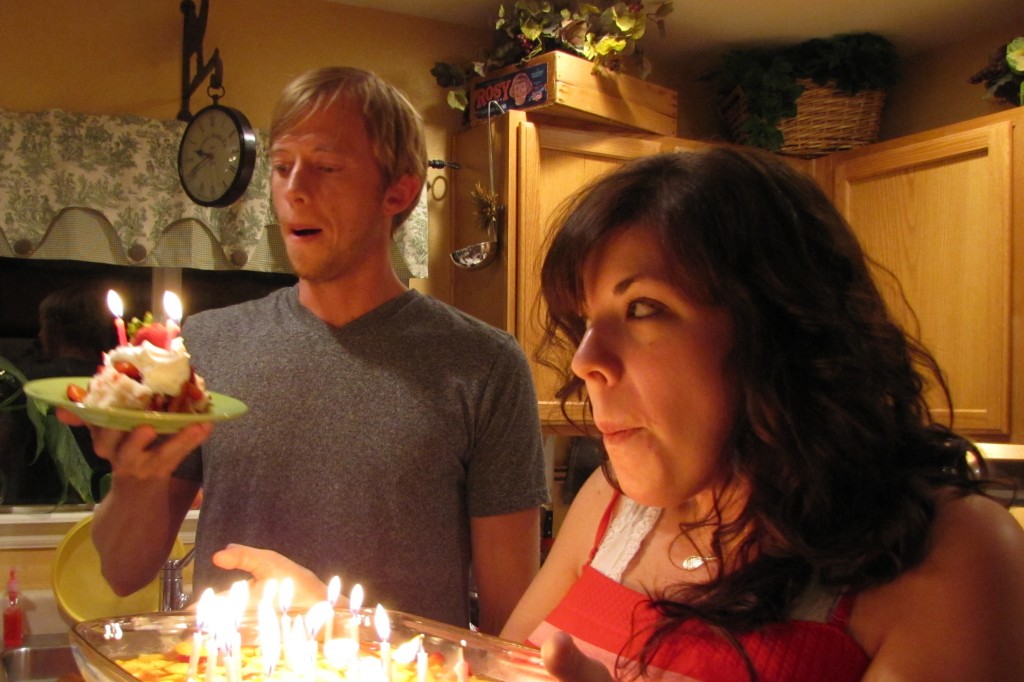 From the October 1988 issue of Family Ties (the monthly newsletter of New Life Church of God in Norfolk, NE).  But I actually have the handwritten recipe card Jane wrote it on.  Beloved and quite in shambles.

My best advice for this in Colorado:  wait until the western slope peaches are ripe and juicy and cause you car to drive itself to a roadside market where the scent and taste literally scream: DELICIOUS!  Yeah.  They just aren’t quite right, yet, these California peaches.  Huh-uh.  Nope.

Lightly pat into glass cake pan (if you push it in hard, it will be tougher and less light and pastry-ish and amazingly wonderful).  Bake it for 15-18 minutes in a 350-degree oven.  Cool.

In a saucepan, blend and cook water, sugar and cornstarch until thickened and clear.  remove from heat.  Stir in Jello and oleo until dissolved.  Cool.

Slice or chop 7-8 ripe peaches (sometimes I make them all beautiful and perfectly uniform.  Unless they aren’t great peaches anyway…like this batch).  Distribute over the top of the crust.  Pour over the sauce.  Put in the fridge for at least 2 hours (overnight is best).  Cut into 12 servings.  Top with whipped cream.

You may also make this dessert with canned peaches, Jane Hagelstien noted (so Nebraska) or use fresh strawberries and strawberry Jello.

*Oleo, for my dear children, was another name for “margarine” back in the day.  Just use REAL butter instead and all will be well! 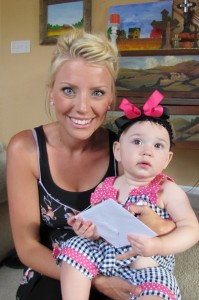 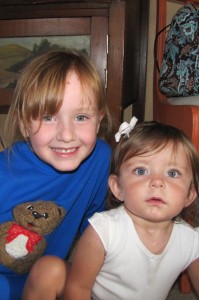 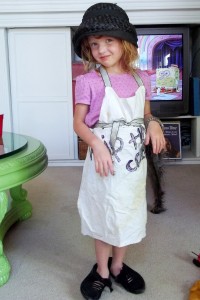 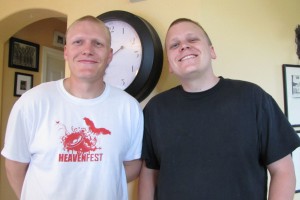 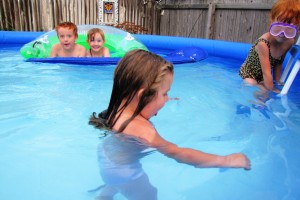 WREX had a birthday, too.

Complete wih a custom song for him by Dave and the girls to the “Wolfcreek Pass” soundtrack.  Love this guy.  There is not a more genuine, giving and generous man than Wrex.  His parents did a great job, but if he were ever in the market for new parents, we’d apply for the job.  He is just a cool guy.  That is why God blessed him with the gorgeous Stefane and the two of them with the loveable kiss-kiss, Princess Sawyer.  LOVE them all! 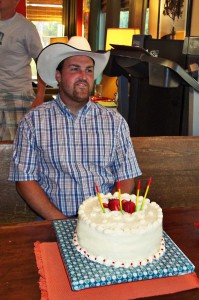 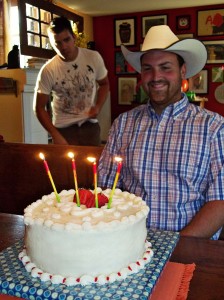 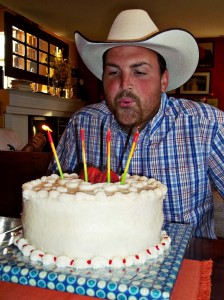 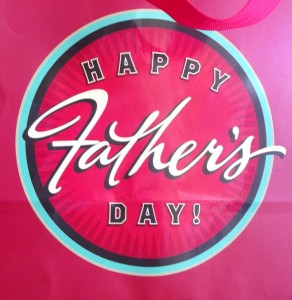 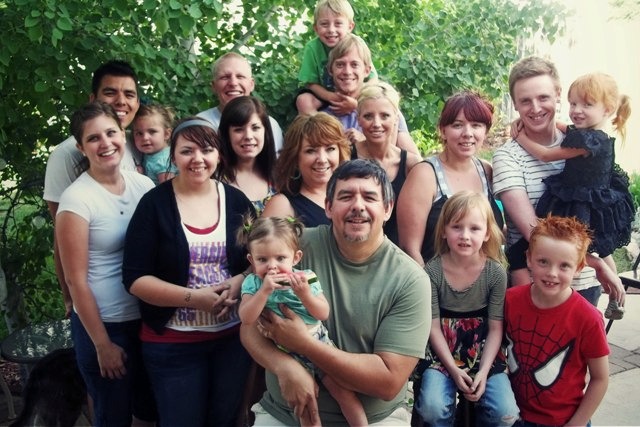 Dave chose his fav worship songs. We sang along to guitar accompaniment, all the current favs, but it morphed in to pulling out all those old songs from the years the kids were growing up.  Pretty hilarious.  Songs you never really want to sing ever agin, but in this context were pretty fun.  “Lord, I lift Your name on high.  I’m so glad to sing your praises…”  Haha.

Artwork by the grandbebes, found the next morning.  Mixed media:: chalk and stickers on concrete.  Intrigued by the block that say, “Aim for the head,” and the stick figure identified as “dad,” albeit backwards, with a huge bunch of snot coming out of his nose.  Haha.

Time to relax a bit with some lollygagging in the garden and floating in the pool and you know, a little thing called Heaven Fest.  www.heavenfest.com