My mom received a devotional book book for her birthday in 2009 that really changed her prayers and ignited her heart. 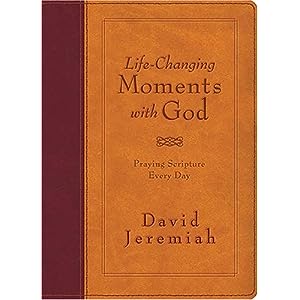 She has been through several copies now and buys them for people she loves a lot.  But she actually gave me her first copy.  It has notes from 2009, 2010 and even 2011 in it.

My mom is not of the “journaling” era, but it became her journal-of-sorts.  It is the record of her prayers for her family.  In it, she shares day-to-day happenings in the margins (“Found a bird with a broken wing today on the sidewalk.  I placed it in the shade, but it died at 7 o’clock pm“), and things she is praying about (“Praying THIS for Joe today.”).  As she reads and prays through it, her Webster’s Dictionary is always nearby so she can read the passages mentioned and write down synonyms and word meanings (“Shield: defense against blows.”).

Dr. David Jeremiah is wonderful.  The prayers are great.  But my mom in the margins, the yellow highlights, the exclamation points and little stars, along with underlines and double-underlines, these are the words of life.  Don;t even get me started on her bold arrows… 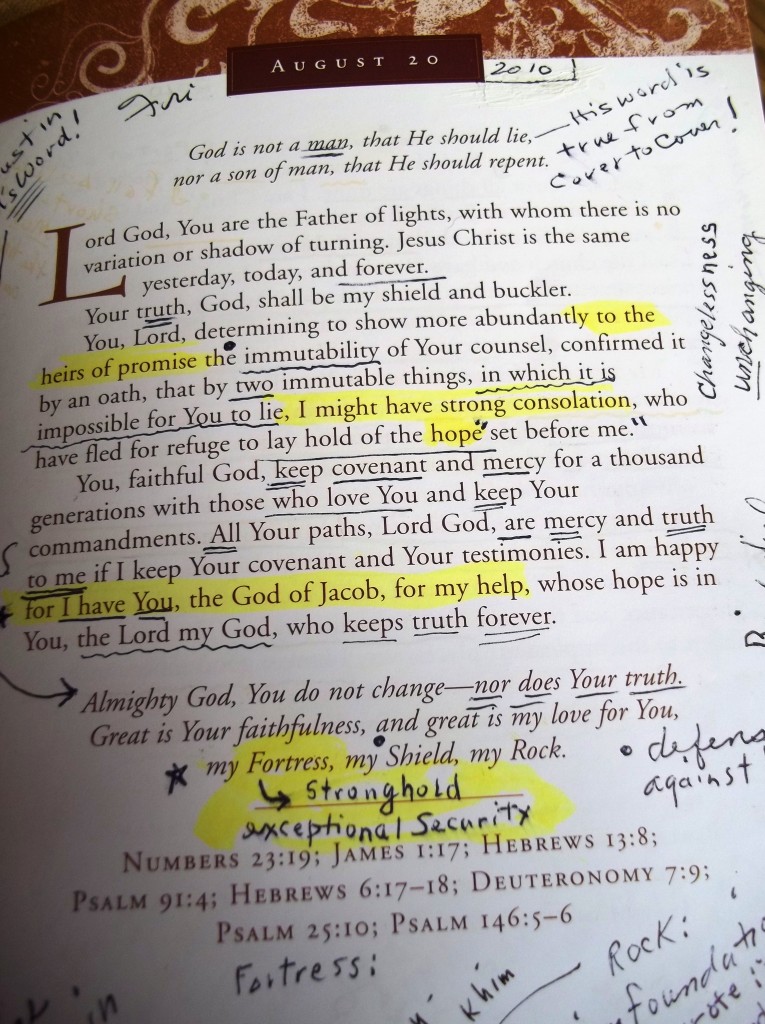 “God is not a man, that He should lie,

Nor a son of man, that He should repent.

Has He said, and will He not do?

Or has He spoken, and will He not make it good?”

“Whatever is good and perfect comes down to us from God our Father, who created all the lights in the heavens. He never changes or casts a shifting shadow.”

Jesus Christ is the same yesterday, today, and forever.

“He will cover you with his feathers,

and under his wings you will find refuge;

his faithfulness will be your shield and rampart.”

Accordingly God also, in His desire to show more convincingly and beyond doubt to those who were to inherit the promise the unchangeableness of His purpose and plan, intervened (mediated) with an oath.

This was so that, by two unchangeable things [His promise and His oath] in which it is impossible for God ever to prove false or deceive us, we who have fled [to Him] for refuge might have mighty indwelling strength and strong encouragement to grasp and hold fast the hope appointed for us and set before [us].

“Therefore know that the Lord your God, He is God, the faithful God who keeps covenant and mercy for a thousand generations with those who love Him and keep His commandments;…”

“All the paths of the Lord are mercy and truth,

To such as keep His covenant and His testimonies.”

Blessed are those whose help is the God of Jacob,

whose hope is in the Lord their God.

He is the Maker of heaven and earth,

the sea, and everything in them—

Rich stuff.  In the Word and in the margins.

we who have fled [to Him] for refuge might have mighty indwelling strength and strong encouragement to grasp and hold fast the hope appointed for us and set before [us].