Ok, I have been thinking about one of my all-time favorite  1980s movies recently and I feel like I am having some amazing thoughts about the love of God from the movie.  You probably have seen it a few dozen times: “An Officer and a Gentlemen” starring Richard Gere and Debra Winger.

So, I may be writing about that soon.  And I had the thought I wanted to say to my single girl (the baby, whose shall remain nameless at this juncture), make sure-make sure-make sure if you get an officer (some wonderfully awesome guy who is at the top of game and powerful in his field), that he is a gentleman, too.  I want that for her.  :)

The story of a police officer in New York City who came across an older homeless man who was barefooted on a cold, cold night.  The police officer went to a Skechers store and bought him a $100 pair of boots and some nice socks and went back out to the man and gave them to him.

And a tourist caught the image of it and everyone is incredulous, surprised, warmed, taken off guard.  We RARELY see these types of stories.

It is so heart-warming, it could practically be a storyline off the popular Friday night TV show, “Blue Bloods.”  But it is a real life story of a real life NYPD officer who was on counter-terrorism duty in Times Square and he just cared.  He was a flesh and blood caring person who took time to treat another human being with dignity, like we all should be and do. 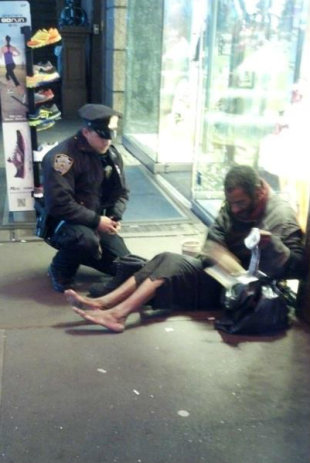 I am ashamed to say there have been times and seasons in my life where I’d have been wary.  I might have said, “The guy was sitting there trying to get people to buy him shoes.”

But the people in the Bible who needed healing sat as close to the healing waters as  they could.  It is where they needed to be. Or those who were so crippled they had to beg for a living – they begged at the gate where people walked by who could help them.  It makes sense, now, sure.

In times of distrust of people’s hearts and motives, though, I might have wondered aloud if this particular cop, who has only been with the department for 3 years, would still have been so soft-hearted with a few more years under his belt, more scarred over time having been used, abused and lied to and fed up with those who can’t seem to help themselves?  Because, haven’t all of us middle-America, middle-incomed types pretty easily reasoned aside the example of Jesus to see needs and meet needs (spiritual AND physical) among the people we pass daily?  I know I have.

But this police officer, a couple of weeks ago, saw a man and was moved with compassion.  He went to the store and got nice boots and warm socks and then he went back to the man got on his knees and put socks and boots on those cold, homeless feet.

Where have you seen that imagery before, you wonder?  Something about Jesus tying a towel around His waist and getting on His knees and washing the disciples’ feet?

NYPD Officer Lawrence DiPrimo – he is an Officer AND a Gentlemen.  And he was the closest thing to Jesus that man met that night, I will guarantee you!  Bravo, Officer DiPrimo!

JESUS SPEAKING (Matthew 25) // “Then the King will say to those on his right, ‘Come, you who are blessed by my Father; take your inheritance, the kingdom prepared for you since the creation of the world. For I was hungry and you gave me something to eat, I was thirsty and you gave me something to drink, I was a stranger and you invited me in, I needed clothes and you clothed me, I was sick and you looked after me, I was in prison and you came to visit me.’

“The King will reply, ‘Truly I tell you, whatever you did for one of the least of these brothers and sisters of mine, you did for me.’

I keep seeing graphics all over Pinterest and Facebook and in emails where my spiritual-family, that big, crazy Family-of-God bunch, is admonishing people to “KEEP CHRIST IN CHRISTMAS.

I say: BE Christ in Christmas.  That’ll keep Him there better than all your militant internet graphics and email forwards will.

‘Cuz hey look!  A secular news agency called the policeman’s act “showing the Christmas spirit.”  If he can do it and they can say it, we can live it, too! 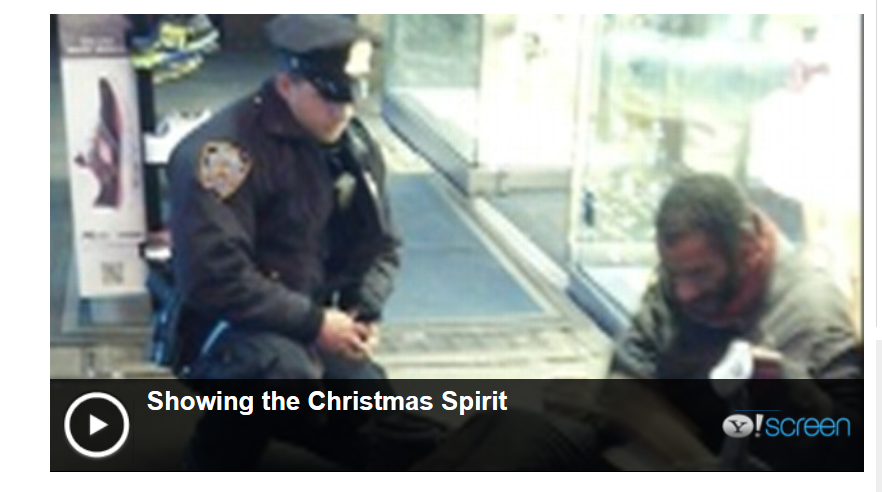 2 thoughts on “An Officer AND a Gentlemen”