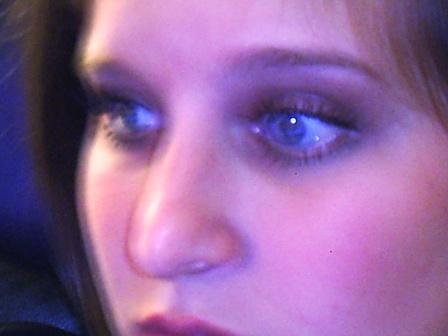 She is a cute girl, I remember thinking, the first time I ever saw Jovan.  She was the younger sister of one of Tredessa's good friends and so, for a time, she was known to me as "Carli's sister."

When we finally knew her by her name, Dave and I kept pronouncing it all exotic-like with a soft "G" and a swinging "o" sound: Giovanni.  "No, no, no," Rocky and Stormie would chide us. "Jovan."  "J" sound.  Simple.  Pretty.  Sweet.

I remember the first time Rocky brought Jovan "home."  He had just declared that he was not going to date any girls for 2 full years, so I just thought it was Rocky bringing home a friend from the youth group (Jovan and Stormie hung out a lot).  I remember her dazzling smile and her shyness.  We spoke briefly as I headed out the door.  Later Rocky chided me for not being more friendly to her.  I should have known right at that moment that not only was he not going to be able to stick to his no-dating-girls-for-2-years proclamation, but that I'd just come across "the one" right there in my living room and I had failed to give the proper fanfare.

I just didn't know.  I always tell Jovan now – I was trying to support his non-dating stance.  Otherwise, yes, I'd probably tried to have impressed her.

She is an impressive girl, or I guess I should say "woman."  She is just so pretty and has the most exotic eyes (eyelash length: 1.769 inches long).  My husband knew right away she was the one for Rocky. I thought they were "just friends" because that is what they kept telling me!  However, during a youth group trip to California that summer, their "friendship" grew and when he came home, they spent a lot more time on the phone and he would often tell me he grew in his walk with God just by all the conversations they had.  He loved talking with Jovan about the Lord.  And he loved telling me about how wonderful those conversations were.  I thought something was up, but they were only "friends."  Right.

Later that year, having watched them dance and laugh and look into each other's eyes at several weddings, her family invited all of us over for her birthday party. Rocky stayed behind and sometime after midnight, just after Jovan turned 17, he kissed her (he assurred me the other night that it was just a kiss – no making out, as if I were still going to try to ground him for something in 2003???).  Let the games begin.

They dated.  Then they didn't.  I missed Jovan during that time.  I went almost a whole year without her around.  When she came back to hang with Stormie some more around the holidays, she fit. She just fit.

We'd have these crazy huge parties and Jovan would jump right in for the preparation. She'd string lights and make appetizers and run the vacuum.  She even cleaned our bathrooms, God love her!  Then she would show up to the party as calm and relaxed as could be, welcoming people in her glittery party dress, helping us host way too many people.  She was a charmer.

She loves so much of what I love and always affirmed my family life and traditions.  We both love over-the-top entertaining and baking and cooking and decorating.  She is very sentimental and appreciated my family photos everywhere and the kid's childhood artwork displayed on my walls instead of the "Christian-y" Thomas Kinkaid prints so popular these days.  She has honored me by holding the same things dear that mean the world to me – especially Rocky.

If you have seen Rocky or know him at all, you can imagine he was never a boy that was overlooked by the pretty girls.  I saw my main job as he grew into a beautiful young man as swatting off the girls who were not right for him.  I will never forget a conversation he and I had not long before he and Jovan had reunited into the relationship that would sweep them into marriage and "one flesh."  Rocky was weighing some lonliness he was feeling in spite of the time he was spending in friendships with several different girls (who were all wanting more).  He was almost 21, a worship pastor, and he knew he needed to be careful in relationships.  I was cutting his hair and we were discussing his pros and cons on a variety of young women.  It seemed that everytime he had a reservation about an attribute of a girl, I would say, "Well, you need some one like Jovan who…" whatever it was.  Her name just seemed to keep coming up.

I don't know if that day was a revelation to him as much as to me as I suddenly saw Jovan in those moment like this: she loves Rocky.  When he is in the room, everyone there knows her attention is on him.  She receives from him spiritually and honors him as a man of God.  She respects the daylights out of him and though I had seen many a young man try to catch her eye, she never wavered, nor flirted back.  She was gracious and set.  I could see her loyalty as Rocky and I talked that day.  I could see that she was wholeheartedly devoted to him.  There was no doublemindedness in her.  She didn't throw herself at him.  She didn't act goofy.  She never chased him down.  She just remained loyal, true, and godly and very nice to his family.  What more could a mom want for her son?  I had finally found the only person who would ever love Rocky more than his mommy.

I didn't tell him that.  But he knew, too.  Very shortly, he announced that he had chosen Jovan.  And there she was again, back in our lives in a very comfortable way.  Her cute shoes were kicked off at our door and she spent many weekends making herself part of the Rhoades family.  When it became official as they married in September of 2006, the memory that stands out the most is watching Jovan look at Rocky like no one else was there and say her vows to him.  And I know she meant every single one.  They were not just words.  She vowed to my son before God and us all.  I was blessed because my son was forever surrounded by her love.  And she is ours!  She is our new baby girl: Jovan Marie Rhoades (she is the youngest of them all, now).  I didn't have to carry her for 9 months, but in a way, I carried her for almost 20 years because I prayed for the girl who would someday be my son's wife.  I prayed…and God has given me what I asked for… 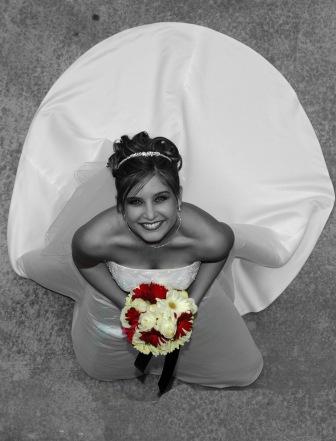 Today Jovan is 21.  She is still this knock-out-beauty-newlywed.  She glows as she carries the life of their first baby girl within.  She is what she has been since I first met her: she is sweet and kind, tender and sensitive.  She is sentimental and thoughtful.  I cherish our scrapbooking times together.  I treasure the words of affirmation she has spoken over our family.  I love how she adores my son.  I thank her for seeing the good and accepting the not-so-good parts of us and for choosing to become a part of us and our traditions and weirdnesses and thinking it is all worth it to have Rocky.  I love that the grandkids adore Aunt Jovan and that our scruffy family dog found a friend in her, too.  I love that she wanted to marry Rocky since she was 14 and that her quiet charm and smile won him over.  I love that Jovan is my daughter and when I walk into a room she makes her way to me with a big hug and honors me as her husband's mother, whether I deserve it or not. 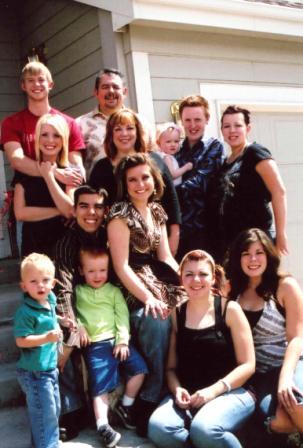 I love you, Jovanie.  I do thank God for you.  You were born to join us.  On that day 21 years ago, you were born to be a Rhoades.  You are a part of us.  Happy, happy, birthday, wonderful woman.  Thank-you for accepting us and loving us.  Your imprint on our family is getting deeper and deeper.  Someday we'll all be a little less sarcastic and little sweeter because of you…

NOTE TO SELF: More time scrapbooking and going over family history with Jovan – it lightens my heart, it makes me grateful in a huge way!

Pictured: Jovan and her eyes; all my girls left to right: Jovan, Stormie, Stephanie, Tara, Tredessa; me and Jovan and some huge earrings; Rocky and Jovan in Maui on their honeymoon; Jovan right in the middle of the Rhoades tribe about a month before Gemma was born, 4-07.