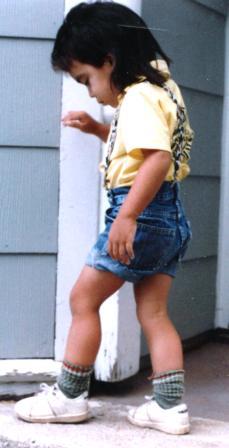 We were rolling along having babies left and right.  We'd had Tara, who was 5, Stephanie, who was 28 months and Tredessa, who was 15 and 1/2 months when baby number four was to arrive.  "The early eighties were a blur," is a famous quote by…ME!

By this time, having picked out boys names before and never getting to use them, we really had no big list going.  In fact, the girls were such a delight, we were Ok with the fact that we might be an all-little-girl-family, save Dave.  By then it just seemed that a 4th daughter made more sense.  Wherever we would live, either there'd be 4 girls in one giant room or 2 girls each in 2 rooms.  And naturally we had quite a collection of adorable girl's clothing awaiting this baby, should baby require it.

So, people would ask: is this it?  Are you having more kids?  Do you just really want a boy?  I know people were were concerned for my well-being, but my sanity was in a happy state of suspension at that time.  I was in the baby-making zone, loving the pregnancy experience, enjoying the birth experience and entertained nightly by the most amazing children.  My little family was my life, my joy, my everything.

Dave and I prepared a pat answer for people, which was pretty blase, actually:  You know, we don't really care.  A girl will be wonderful.  In fact, if we have a boy, we'll probably have at least one more baby because we wouldn't want the boy to be the hen-picked-baby of so many older sisters.  After having given said pat answer to my brand-new sister-in-law, Robin, her eyes grew wide with concern and she said something like, "Well, then, I hope you have girl so you don't kill yourself having babies!"

Imagine the surprise when the doctor announced, "It's a boy!"  I had been fine with the possibility of a girl, expecting it , really.  I hadn't even dared to hope we'd have a boy.  More powerful than the force of my son being born was the torrent of raw emotion following like afterbirth:  I laughed.  I cried.  It was mixed.  I couldn't get my breath.  "You're kidding!???!," I was incredulous.  But no, they were not.  All of my "even-steven" girl and frilly-dresses plans were out the window.

He was born late (on a Saturday night) and when I finally got to my room, I was in a state of euphoria you could not believe.  I couldn't sleep all night long – I just wanted to hold him and look at him.  I can still, 23 years later, recall the smell of his head, the warmth of his skin, the weight of his fresh-born body fitted perfectly into my arms. Sometime just before sunrise the nurses convinced me to get a little sleep, even though I just felt like dancing.  As they put him in his little bed, I looked out the window at the twinkling lights of the city and felt new and full of hope – the feeling of God's favor on my life keen and clear.   He was our baby boy, a first, so very different.

The memory is so strongly emblazoned that when Rocky told us a few months ago (on a Saturday night) that he and Jovan were going to have a baby, I dreamed of it – a baby boy in my arms – I was re-living looking at Rocky, but this baby had Jovan's baby hair.  It was so real I cried the next morning when I told him about it.  I am already in love again. 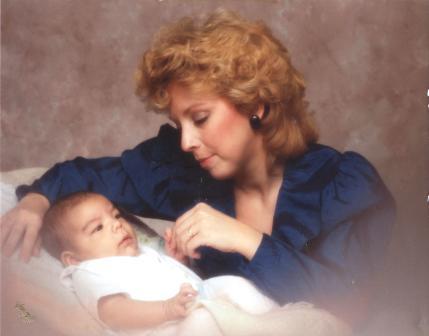 We named him David Allen Rhoades II after his daddy.  Dave didn't want a David Jr., but having been adopted, he had come into the world without a "biological history" so his name, I convinced him, was a great gift to give – the beginning of his legacy to his children.  But within in few days, we knew what a hassle the same name would be throughout the years and we announced that he would be called "Rocky."  And thus he has been since.

When he was little, Rocky actually thought the cereal, the ice cream and the TV show by the same name were titled in his honor.  When he'd get away from in a store, you'd hear snickers throughout as the loudspeaker announcement declared: Rocky Rhoades, meet your parents at the Service Desk.  Rocky Rhoades, please come to the front.

Any fears we ever had over whether or not he'd turn out feminine with 3 older sisters were put to rest as he grew.  They were girly, liked hair ornamentations and sang silly songs.  Rocky was rough and tumble, could climb cabinetry before he could walk and liked bugs.  The girls were lady-like and polite.  Rocky made school teachers and Sunday School teachers alike cry.  Slightly ornery, I guess.  Adorable to me.

Happy Birthday, Rocky!  Every single day of your life I have loved you deeply and passionately.  Every single day of your life I have believed in you with my whole heart.  Everytime I see you, I see into your future, I see things God has planned for you and paths He is preparing.  I watch you doubt yourself and sometimes question your value in the kingdom and I rebuke the accuser on your behalf. Every day of my life, I am grateful because you are the son I secretly wanted so badly, but hardly dared to believed I'd ever have.

I have always been so proud of you.  You were the classic brother, teasing the bewillies out of your sisters, but by the time the voice changed and I started having to swat all the little girls away – I could see a depth of character emerging in you, I could see God placing His imprint on you.

Once, when you as a young teen-ager were really taxing my nerves, I was walking into a store on a snowy day just saying "God, give me insight into Rocky – this strong will, this tough exterior."  Immediately – the Holy Spirit told me you were a David (The Psalmist, the worshipper) – just out in the field throwing rocks, maturing.  The Holy Spirit also told me you were a Peter, whose name means "rock," (the impetuous disciple – ready to cut off an ear to defend Christ).  I had to laugh and cry like I did the night you were born – I could see it clearly.  Not because you were singing yet, because your whole life you didn't – wouldn't sing.  Our whole family sang our heads off, loved worshipping God.  You were silent.  But suddenly God showed me what He was working in you – you'd be  David-worshipper and even though Peter struggled in his faith and even denied the Lord at one point – he also stood boldly and preached the gospel without apology and the church of Jesus Christ was born!

Rocky – can you comprehend the size of the lump in my throat when, at a family Bible study just a week later, you shared that you'd been looking at the people of the Bible, wondering who you were like and felt God had told you:  David, like your name, and Peter.  Upon this rock of revelation, my son…You said you wanted to be the man spoken of in Psalm 112 – the blessed life of the man who fears the Lord.

I will always remember 2002.  At 17 1/2 you had attended a worship event over New Year's and you came home with a song in your heart.  Our eyes widened  in amazement as we begin to hear you worship in your room hours on end.  There were nights I'd peek out at 2 am and see you in the living room by the light of the moon singing to the Lord.  After years of trying to get you to sing – it was pouring out of you, pent-up passion and the fire shut up in your bones for the Lord had began bursting forth, but in a private holy way.

It was months before you began to share it with the family.  At the slighest provocation, you'd whip out your guitar and we'd all be caught up in the Presence.  No matter how tired you were from a hard day of work at Discount Tire, if you came in and I was at the piano, you'd grab your guitar.  Much worship was rising from that place, then.  I remember you getting hoarse from singing so much.  I suggested once that you take a few days off from singing and you said, "Mom, I can't.  I withheld singing to the Lord for so long, I have to sing to Him now."

When, after 9 months of secret worship, you were given the opportunity to lead publicly and the Spirit of God came in to that place like a heavy, powerful wind, some one asked me, "Wow – are you surprised that was in your son?"  I wasn't.  I had watched you carefully and seriously worship God in the secret place for nine months.  So, on your 18th birthday, in a new birth of sorts,  God let you invite the rest of to go with you into that place adoration and praise.

I love you, my son.  You were born to worship God.  That is your call, your purpose, the thing God loves about you the most – that you give Him your song.  Your are the son I love, I am so pleased with you.

We love you, Rocky.  We bless you.  We are blessed by you.  Happy 23rd birthday.  Happy love and marriage with the beautiful wife of your youth.  Happy daddy soon…Mom

Pictures: Rocky at 4, Rocky in 1st grade,me adoring my 5-week old, Rocky at his 13th birthday with the Stormtrooper gun he begged for (this year Jovan and us Rhoadeses all chipped in to get him a Spring UTG Sniper Rifle Accushot Competition Master Model 700 Pro with a 3-bolt FPS 450 and Bi-pod, which he will receive tonight as we celebrate http://www.hobbytron.com/AirsoftSniperRifleGunSpringLPSOFTM324S.html.  It is much needed for life at the church office), and Rocky with Jovan