The 2 Movies You MUST Watch for St. Patrick’s Day Celebrating~

If you can see one and only one movie during the month of March, I must insist, for your own good, that it be The Quiet Man starring John “the man” Wayne and Maureen O’Hara.  Oh yes.  I must insist.

John Wayne plays a disgraced American boxer who returns to Ireland to reclaim his homestead.  Maureen O’Hara plays the part of a poor, young maiden/”spinster” who catches his eye.  The movie follows the tension-filled and spicy relationship that forms between them as they both struggle to maintain control while her brother tries to keep them apart.

There is a cast-full of charming villagers, the matter of a dowry, advice on the duties of a married wife, some kissing and a slap, a kiss in the rain at a graveyard (note John Wayne’s nice silk shirt), Maureen O’Hara’s enviable red hair, the wedding night and the broken bed, a drunken brawl that has everyone placing bets,  the townspeople helping the Reverend look good, and the importance of a good Matchmaker.

John Wayne is beautiful in this one, a perfect mix of testerone and tenderness, manliness and mild-mannered good graces.  And don’t forget the shirt and the kiss in the rain!!!   Watch for this fun line from the Matchmaker: Impetuous!

Just see it.   Really and GOD BLESS ALL IN THIS HOUSE!

If you can see only two movies during the month of March, the second must be, without question, Far and Away starring Tom Cruise and Nicole Kidman.

Though pretty much critically panned, it is majestic in its’ panorama taking us from Ireland to New York during the great days of immigration in the late 1800s and finally to the legendary Land Race of  the Oklahoma-territory.  Add to this beauty, Tom, playing Joseph and Nicole, playing Shannon, as the poor potato farmer thrown together with the sassy, well-to-do land lord’s daughter and the adventure begins!  Attempting to hide their growing attraction under the cover of hostility, the movie spans thousands of miles and many months culminating in the grand feel-good scene at which two of the movie’s taglines hint:

“They needed a country big enough for both of their dreams.”
and
“He left behind everything he knew for the only thing he ever wanted.”

Ron Howard directed and I love the history it reveals, but it is really about the story, the relationship between a red-headed Irish girl and a hard-headed boy, and about a dream.  See it.  Seriously.

6 Other Movies with a Bit ‘O the Irish in them:

WAKING NED DIVINE {1998}  What if you won the lottery and then died from the shock of it? Cute, charming and set in a tiny Irish village of less than 50 people.  THE SECRET OF ROAN INISH {1994}  “It’s a beautiful story.”  AUGUST RUSH {2007} starring Jonathan Rhys Meyers who is Irish and very cute and some girl.  Beautiful movie about music and sound and song and love…THE FUGITIVE {1993} starring Harrison Ford has an “escape” scene in Chicago’s St. Patrick’s Day Parade which is helpful to him…  THE COMMITMENTS {1991} I haven’t actually seen, yet, this movie about a band in Ireland, but have it on order from Netflix because I hear it is good…  ONCE {2006} A quiet, beautifully melodic story that takes place in Ireland.  For the music alone it should be seen more than once!

Three Meals You Can Eat~

The clothes you could wear. 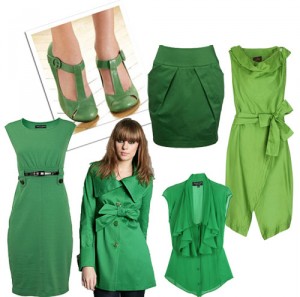 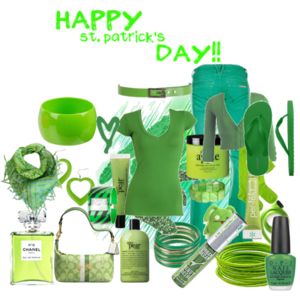 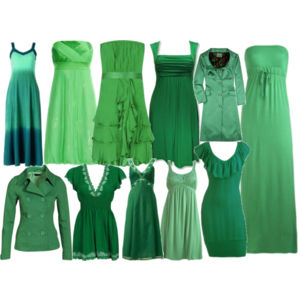 Get an Irish-themed tatoo. 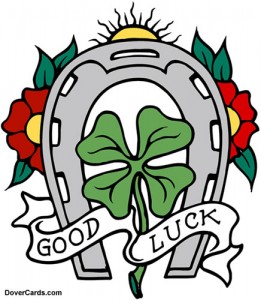 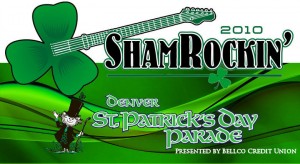 No, I am not Irish.  But I do watch The Quiet Man once a year and I am making Wrex some Wrunzas and wearing green on the 17th ~ which makes me pretty darn blustrificating, if I do say so myself!

Blustrification: the action of celebrating boisterously