Dave and Tara used a clip from “Minority Report,” with Tom Cruise as the scene that most reminded them of my dad, their ‘Grandpa Moslander,’ as we honored him on his birthday.  It was when the girl with “the gift” of seeing the future (Agatha) was helping the Tom Cruise character (Jon) run from people who were trying to frame him for murder.  She’d been kept in a semi-comatose state in a pool so she had no muscle tone as they were trying to escape and he was kind of dragging her along, attempting to look normal, as she told him what to do and when to do it.

As they entered a busy mall and passed a kiosk, she tells him, “Take the umbrella!”  He was going forward quickly because he is running for his life, but then he hesitates and listens to her as she orders him again, “Take it!”  He grabs it now hauling her body along on one side, clutching the umbrella.

As they are weaving throughout the shopping center with a veritable army on their heels, he learns to trust her “gift” even when it seems ludicrous.  Once she has him just stop dead still and as he sees the “bad guys” approaching, she is telling him, “wait….wait…wait…” and of course, as he does, he is miraculously covered from their view buy a big bouquet of balloons as a little girl’s mom buys one from a mall clown for her.

When they finally exit the mall, seemingly surrounded and having been spotted by the agents who were attempting to frame him, they walk outside smack into rain and Jon (Tom Cruise) is amazed as understanding comes to him and he opens the umbrella to cover the two of them – among all the other people already covered from view by umbrellas.  Ah – now we understand her command, “Take the umbrella!”

Dave and Tara were telling their grandpa, with commanding motion picture imagery, that they are thankful he followed the leading of the Holy Spirit  and trusting God in his life even when it didn’t make sense and outward circumstances may have seemed  to contradict the direction he received. We all teared up at the powerful scene depicting so beautifully, that spiritual premise:  Trust God.  Follow where he leads. 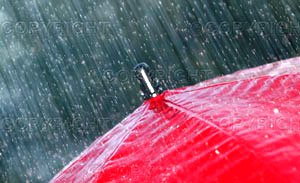 Is it any wonder I cannot get the song, “Umbrella” a haunting blue-grass song by the Isaacs, out of my mind?  “Your love, like an umbrella, covers me…”  I can’t quit singing it, can’t escape the symbolism and the impact it is having on me. (see them sing it on youtube)

On Friday I got the neatest card of encouragement from my sister, Tami, who lives oh-so-far-away in Kentucky, but is always in my heart.  Here is what it said:

“THE FIELDS were parched and brown;
the crops lay wilting from thirst.
Local ministers
called for an hour of PRAYER
on the town square,
asking everyone to bring an object
of FAITH FOR INSPIRATION.
The townspeople filled the square
with anxious faces
and HOPEFUL HEARTS,
a variety of objects clutched
in prayerful hands-
holy books, crosses, rosaries.
When the hour ended,
as if on magical command,
a SOFT RAIN began to fall.
Cheers swept the crowd
as they held their
treasured objects high
in GRATITUDE AND PRAISE.
One faith symbol seemed
to OVERSHADOW all the others:
A 9-year-old child
had brought an
UMBRELLA.” *

The Bible promises “showers of blessing.”  The other night, right here in Denver as a light snow fell, there was thunder and lightening – a somewhat rare combination.  Maybe it is God saying, “Take the umbrella – even though it’s winter – take it!”

NOTE TO SELF: Have faith in God.

*The words on the card were by Laverne W. Hall, adapted from Chicken Soup for the Christian Soul  page 198

81 thoughts on “Take the Umbrella”