When (if) I blog about Christmas, when (if) I get the time (because I LOVE LOVE LOVE Christmas), I shall place this banner in the body of the blog.

Here is what it has:

“Keep Christmas” because that is actually one of my blog categories and is derived from the Charles Dickens quote, which you may read at the bottom.

Next there are 1960s baubles and I love the merry cheer they invoke.  They were the type of ornament I grew up with and make me happy.  It was a google image I happened by and I don’t recall the source.  Thank-you, some random jpg-poster!

Then, I allow you a “sneak peek” at some little Rhoades Family Fun we had a few weeks back.  There are some darn cute pictures that will go one our Christmas card – if ever I actually get around to doing that!  The grandbebes just bring me joy! 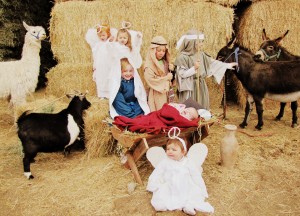 This particular shot (used in the banner) was a split secondbefore total chaos erupted.  At this precise moment, Amelie is watching her little tiny life flash before her eyes, because the donkeys just got spooked by the {giant} white calf that walked up on the right.  Meanwhile, the alpaca on the left  has freaked out the billy goat, who is madly ramming his horns in to a bail of hay and has caused Gemma May to run to hide behind Averi.  The miniature donkeys nearly trampled the whole lot of my bebes, but it did not stop our photo shoot.  Oh no, it did not.  We kept right on shooting with angel-Amelie and Baby (Sawyer) Jesus crying their heads off in the frigid air.  It was a hilarious sight to see. 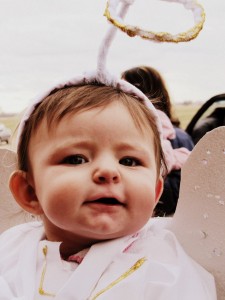 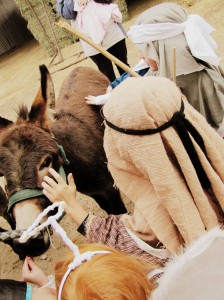 Hunter asked if this was the last year we’d be doing a nativity.  “Oh no,” I told him.  “Pretty much you’ll be in a Christmas Nativity scene for my Christmas cards until you’re grown and married and have kids I can use.”  He seemed to shrug that off without much surprise. 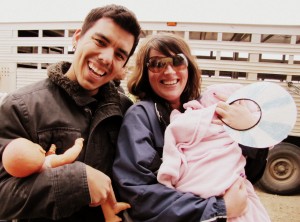 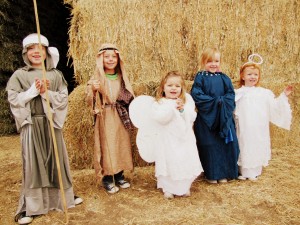 This shot of Stef holding “Baby Jesus” dressed in pink and Rocky holding Baby Jesus’ body-double cracks me up, for some reason.

The final photo is of the actual tree-topper my family used in the 1960s.  “Angel hair,” or spun glass, was all the rage (we’d all tell horror stories of children we’d heard of who’d been dumb enough to run their fingers over the glass threads and began bleeding profusely on to the Christmas tree, each story topping the previous).  Truthfully (true confessions) , I never knew of a single cut, yet the myth persisted and annually, we were careful-beyond-carefulto avoid bleeding out as we decorated wih the mysterious and deadly angel hair.

My mom says she picked this topper up in a grocery store, circa 1964.  This is what Stormie says I have to explain: I was holding the topper at arms length in front of me because it is the story.  She thought I’d just pasted it onto a blurry photo of myself.  So there.  You can’t see my arm much, but it was there! The ANGEL was the focus (or should I say, the “paper angel” to fully distinguish between the two of us? ;D ha-ha-ha ).

In the end, the banner is just a reminder to you, to me, to KEEP CHRISTMAS, the celebration & worship of the Christ, because Jesus is all, and all in all….

4 thoughts on “The Banner”