Here is something more  from my personal  “Grace from the Garden,” – messages I get from God while I am digging around in the dirt. 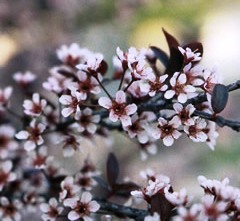 Grace note: The most lush and fruitful growth shows up where the pruning last took place.   The spiritual implications of this are almost frightening.

I have a love-hate relationship with what we call “shrubbery.”   I love  it because  it creates easy-care interest in the garden and landscape, and I hate, not the bushes, really, but the fact that we must “tame” them for suburbia.   I have 2  purple-leafed Sand Cherries (prunes x cistena)  flanking a  Weigela and have not-so-carefully tended and watched their growth over the past six years.   They have become, truly, almost an embarassment, full and fat (average-growth-4-to-6-foot-width-my-posterior), large and tall (biggest kids on the block).   My “method” has been to let them be what they were created to be, and not shave them back to little boxy geometric sculptures like some of the neighbors have done.   The  Sand Cherries  have rewarded me, in turn, by being a cool reprieve guarding our home  as the hot sun is setting in the west.   They have created a beautiful frame to  the mountain view out my living room window and added rich, deep, purplish-burgandy leaf interest  to a mainly green outdoor vista.   They are one of the first prophetic trumpet-calls that winter is over every year  when they burst and sway under the weight of thousands and thousands of tiny pink blooms each spring.

In short, I like them as they are, but I must prune them and keep them in check for the neighbors’ sake.   And so the  homeowner’s-association-nazis don’t send me a letter. 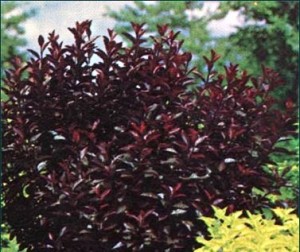 I ventured out this morning with pruning shears in hand to bushes bowing in the heaviness of growth.   And what did I find?   That the “offending” branches, the ones reaching to places they don’t belong and obstructing the Weigela’s view, the branches threatening to cover the entrance to the house entirely – they were all growing directly from the branches that I pruned last summer.   They were, without apology, shooting in every direction  from something that I had put a stop to, a place where I’d cut.   They had multiplied and become fruitful!   For every one cut last year, 6, 8 even 12 branches had formed in defiance, an ingrained will to live, live like God intended!

So, I pruned a little less lightly than I had intentioned, because I think those bushes are out to defy me, anyway.   And I thought about the concept of growth where the wounding took place.

I am always asking God to make me like Him.   I am constantly reaching toward what it means to be filled with the fullness of God.   I pray, “May Jesus Christ be formed in me.”   Then I cry and freak out at the pain of the pruning.   The pain of the cut has often been severe, almost cruel, it seemed.   I’ve mourned  to see my “fruitfulness,” the giftings and talents and abilities I’d so carefully and proudly presented – chopped off, thrown into the trash pile.

But in truth, the places where I have been pruned – right there next to the wounded and healed stump of the cut, that is where my greatest joy and most  lush growth has come.   That is the place of fullness, freedom and delight,  the place of my greatest faith.   There is life  in those places now, abundant.

I don’t like the thought of going through it again, yet, with regularity, the child God loves, He disciplines.   Jesus said, “He cuts off every branch in me that bears no fruit, while every branch that does bear fruit He prunes so that it will be even more fruitful.”   John 15.2 NIV

Here is what I know, at least as often as I need to prune my purple-leafed Sand Cherries, God is probably going to have to prune me.   Maybe more.

Thinned out and leaking a little bit of sap  today…Jeanie

NOTE TO SELF: Stay in the process.   Let God finish His work in me.

“…don’t shrug off God’s discipline, but don’t be crushed by it, either.   It’s the child He loves that He disciplines; the child He embraces, He also corrects.   God is educating you; that’s why you must never drop out.   He’s treating you as dear children.   This trouble you’re in isn’t punishment; it’s training, the normal experience of children…”   Hebrews 12.4 The Message

2 thoughts on “The Pruning”