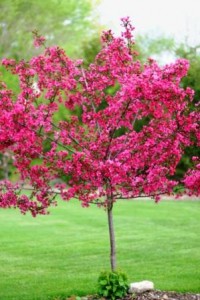 Some “Grace from the Garden,” things I learn about God while I am digging around in the dirt…

Grace Note:   This season will come again (ready or not).

I was asking God, not  with words, but from my heart (and I know He heard me loud and clear), Why do I find myself back here in this recurring place of pain, this particular  area of brokenness for which I have forgiven the best I can and given it to You and prayed and studied and tried to follow  Christ’s example?   Why do I repeatedly respond and react to certain things from such an old place of injury?   How come, after You last  helped me and brought understanding and so much healing, do I find today that I still have further to go?

God immediately drew my attention to a flowering tree of some sort  I planted a few years back (pear? dogwood? crab apple?).   I don’t think I prepared the planting hole well when I got it.   It was an end-of-season clearance, so I got it cheap with kind of a well-if-it-makes-it-good attitude and proceeded to plop it in the ground where it did not have much chance to establish itself before winter. It did not do well.   It barely survived the winter and made a very poor showing in the spring.   I had to coddle it with special watering and food all summer.   The following year, the same.   Very little growth and a very spindly and sickly-looking tree.   I anticipated, though I allowed it to just keep plodding along,  having to begin again in that corner with a different tree.

But this year, there has been a turn.   Somewhere, in someway, it has finally established itself  after almost 4 years in it’s place. It has doubled or tripled in size.   It bloomed profusely this spring and then shot up in height some more.   It is now radiant with health and I think it’s going to bring me much joy in the years to come.

God put that tree in my mind. And then  I am pretty sure I heard Him tell me:   That tree goes through the same four seasons each year.   That is the same tree you planted  4 years ago.   But that tree is not the same this spring as it was the spring before, or the spring before that.   Every year after the time of dormancy (while I, Jeanie,  btw,  always feared  it had finally and truly died), when you’d notice it again, it was the same tree, but the tree was different, not the same.   There are seasons.   You will go through the same season again and again, but each time, you’ll be different.    Sometimes the difference will be below ground, where the roots reach out for what is needed.   Sometimes it will be visible,  branches waving in glory.      It’s just a season.   It’s a season.

So then I guess the answers to my heart’s questions might be:

Q: Why am going through this same thing again?   What is wrong with me?

A: Nothing.   You’re right on track.   It’s a season.   But you’re different this time than during the last season.   It’s a growth-spurt opportunity!

Q:   When will it finally be done, when will I get it?

A:   When Christ is fully formed in you.

And as I am writing, the strangest thing just came to my recollection.   I named my daughter, Stormie, after Stormie Omartian (the wildly famous prayer author, singer, song-writer, speaker) because when I faced my first adult “storm” (try being a teenage preacher’s daughter, pregnant at a Bible College) I ran across her lyrics to a song I still have never heard, but which impacted me, nonetheless.   Wow, even as I write (and I googled the lyrics and there they were!), God is reminding me that He has been telling me this all along, for 30 years almost:

“When summer dreams start to fade and lose their light
When the spring in your heart is so cold, it can’t be right
When you feel you’ve lost control and the valley seems so low
It’s not forever, it’s just a season of the soul
~
If you could step away and see just how far you’ve gone
If you would take the time to just  see what you’ve become
You’d have the time to grow, you’d have a chance to know
That it’s not forever, it’s just a season of the soul.
~
Walking alone in the desert at night, searching for the rain
How can this happen to me, it’s not right
When Jesus is my friend and everything was going right
I was standing on the line, where did I go wrong?
~
A time to cry, a time to sing – there’s a time for everything
Nothing lasts for that long, so don’t look at what you see
Just keep your eyes on Me, I won’t let you go…
It’s not forever…
~

It’s just a season of the soul.”..Jeanie

NOTE TO SELF: I  am still me, but I am not the same as last time, by His grace and His undying faithfulness.

“Seasons of the Soul” lyrics by Stormie Omartian

82 thoughts on “The Seasons”