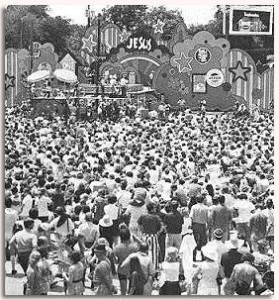 I was 12 years old and struggling to make the transition from little girl being raised in the strictest of Christian homes to some one who had her own relationship with Christ.   I probably could have gone either way.

My dad, aggravated about how much time I spent in my room (listening to ungodly music, mind you), forced me to the living room one night to watch the first of a 3-night televised production of what was later dubbed “The Christian Woodstock”.   I didn’t want to.   I heard it had something to do with Billy Graham and thought, “Oh, no-what kind of church thing is he making me watch?”   But I was told I had to and so I did.   At least it was music, which I always loved.

It was Explo ’72.   And oh-my-goodness, it was awesome.   It was amazing.   It turned out there were normal-looking people who loved Jesus.   There were hippies who loved Him and there was “Christian Rock” which, believe me, was widely thought of as heretical in the church.   It impacted me so much.   I truly think it was the first time I realized the vast beauty of the Body of Christ in the world.   Because of sort of the smallness of my denominational upbringing, I believe it was the first time I had ever realized that Jesus had such a huge following.   Jesus was actually a movement.   There were Jesus people!

Imagine my surprise when recently, as preparations for Heaven Fest were in full-swing, I got to thinking about that  televised event  in 1972 and how it had so  influenced my life and when I googled it, I found articles telling how that same festival had deeply impacted the life of a then-17-year-old Mike Huckabee as well.

One way.   Love Song (with Chuck Girard).   Larry Norman (the “grandfather of Christian Rock”) with his very long, shaggy blond hair singing, “Sweet, Sweet Song of Salvation.”   Andrae Crouch and the Disciples.   Danny Lee and the Children of Truth.   Randy Stonehill, “Didn’t He?”.   These and more reached me at a crucial crossroads.

I sent away for the album, Jesus Sound Explosion, which was never made available in stores and is now a collector’s item.   My dad sold the copy i listened to  like crazy  all through my teens years in a church garage sale, but after years of searching, my husband found one for me the Christmas of ’06 – just months before I would become involved in Heaven Fest. 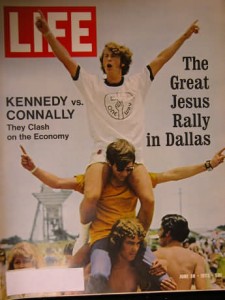 God dropped the Heaven Fest vision in Luke’s heart on July 6, 2006 as he was driving home from Cornerstone.   But Heaven Fest was planned way before even that  and I truly believe every single person who participated was ordained long ago.   A seed was placed in my heart in June of 1972 for what took place two days  ago.

Dick Mills and the prophetic word in the early 90’s.

We were making a big change in ministry and attended a service where Dick Mills was speaking.   He called Dave and I to the front and began to speak an intense prophecy over us using scripture after scripture.   One of the notable things he said was that God was going to put Dave and I smack-dab into the middle of teenagers and young people and college-aged people  coming to the Lord by the thousands.   I remember at the time I got a picture in my  heart of a blanketing of people on a field.   A friend of ours asked afterwards if that word meant we were going to go back into youth ministry.   I could not comprehend the meaning of it.

It was about that time that I began to recall the passion of the days of the Jesus Movement, the Jesus people and the way the Holy Spirit was sweeping the earth in the early 70’s.   I came across an article in Charisma magazine, which I believe was titled “Jesus People-Where are They Now?” and I was stirred for my own children’s sake.   I began to realize I had  witnessed amazing things, experienced a certain and real  wave of the Holy Spirit.   I’d worshipped with long hairs and hippies and nuns who sang their praise in unknown tongues, right along with Episcopalians and Presbyterians as the Holy Spirit brought them together under the holy umbrella of One. The One.

So I started praying for my kids to see a move of God in their day.   I started asking God specifically to allow my children to be involved in something eternal, to be part of igniting a flame that would burn our city and this nation to purity, to life.   It became the rallying prayer of my life: “Lord,  I have heard of Your fame, I stand in awe of Your deeds, O Lord.   Renew them in our day, in our time make them known…” (Hab.3.2).   O God, I saw You come and move this nation.   I heard You, I heard from you at that young age-come, Lord-do it again in my lifetime-let my children see Your glory in the earth.

Saturday night, during the Main Event, after thousands and thousands fell on their knees and faces in the field in personal repentance, my son-in-law, Dave (a modern-day Psalmist and a leader into the Presence through praise) asked them to stand and boldly proclaim what God had said to them and the commitments they had made and I got to lay hands on the entire front row 2-3 people deep and declare the blessing of the Lord over them and call forth God’s plan for their lives.   Some wept, some thanked me as the word came for them that they were “orphans no more.”

One 20-something young man who was standing back aways from everyone  with head low, almost seeming as if he’d rather not be noticed, caught my eye.     I nearly turned away-not wanting to disrespect his stance, but the Lord didn’t let me.   I breathed a quick prayer for sensitivity and how to honor him and as I stepped  toward him, he looked at me and asked, “So-are you praying for people, or what?”   As I assured him I was and he said, “Well, I need you to pray for me,”   the Lord showed me what a strong call of God he had on his life and that he had been running from it.   I could see his heart was aimless, but had never been at home outside the love of God.   The favor and love of the Lord for this kid was so apparent I felt honored just to be standing next to him.   God gave me much to pray for him and he stood in the night rededicating his  life to God and you could almost visibly see a love-cloud jetting straight from the heavens to wrap him up.   He seriously had the smile of God on his upward-turned face as he stretched his arms toward a Father whose love had not, he discovered, ever let him go.   Arise, shine, Gabriel-for the glory of the Lord has risen upon you!

Revive Your great works in our day, Lord.

A few months ago, I was reminiscing about some of the early artists who impacted my life and I ran into a recent project that reunited many of the early Christian rock artists in CD/DVD form, The Beginning Concert: The Jesus Music Reunion.   We were already neck-deep in Heaven Fest prep and it was only on paper, but we were asking God for something that would live beyond the day.   None of us, Dave and Tara, Luke, me – wanted a concert and just  a fun day for Christians, but rather to see eternal kingdom things: the lost found, the lethargic re-fired, a revival ignited.   I mentioned The Beginning Concert on this blog and the producers so kindly sent me a copy.

When I heard Chuck Girard, whose music had influenced me from the time I saw him appear at Explo ’72 with Love Song and through the early 80’s, I was moved to tears with how God has been preparing my heart all along, He was leading my steps.   Chuck Girard  said on The Beginning Concert DVD, concerning the early 70’s and beyond:

“People look at me with a blank stare when I mention the Jesus Movement.

Back in those days, what drove the music was – what drove all of us was a zeal for souls.   You know, we had a lot of zeal, very little knowledge.

I knew two things back then.   I once was blind, but now I could see, and ‘Jesus loves me this I know.’   And that was about it, you know?

But we got out there and we did it and in the 1980s came the teaching movement and we got all really cerebral about the whole thing, but we lost a lot of the zeal, and my prayer is to bring that combination of knowledge back with some of that zeal of the early 70s and seeing another Jesus Movement.”

The reunion concert ended with Chuck Girard leading the audience and other artists in the song that categorized the unchanging message, a song from the 70s that summed up our hearts for Heaven Fest ’08, too:

“It’s the Name above all Names

It’s the Name above all Names

And we will shout it to a dying world!”

This is the legacy, the path that will bring my grandchildren and their children into their assignment…Jeanie

NOTE TO MY KIDS:   This is why you weren’t raised on irrelevant, churchy music, but purposely trained to enter the presence through praise.   This is why I  immersed you in the song of the Lord, whether it was a 200-year-old-hymn or the latest sound.   Because through worship, through the song you sing – you will declare His name to a dying world.   You will bring life.   This is part of the story of the legacy I leave with you – a partial explanation of God’s preparation for your life story.